The comfort zone of Americans is becoming broader, and many—especially the younger ones—are seeking excitement and adventure to spice up their foods.

But given the certain amount of trepidation around cooking, consumers are finding there’s an easier way to jazz up their meals—with lesser-known spices and condiments, which are seeing fast and large adoption. “The great thing about these is they’re easy to experiment with,” says Maeve Webster, president of foodservice consultancy Menu Matters, Arlington, Vt. “They’re essentially low investment compared to an entire dish that’s unfamiliar.”

The spices and seasonings market is growing, projected to reach $7 billion in the U.S. by 2026, according to the National Seasoning Manufacturers Association in Hackettstown, N.J. Part of this is due to manufacturers and consumers looking to innovate and make foods healthier, using seasonings instead of salt and sugar, says Executive Director Robert Post.

Condiment sales are stronger in the summer, while spices peak in the winter months at The Fresh Market, says Dwight Richmond, director of center store merchandising for the Greensboro, N.C.-based company. “Consumers are inspired by what they see on social channels and TV food shows, so they’re willing to explore new flavors,” he says. “They also want to inspire others with their ‘Instagrammable moments’ and show their culinary creativity.” 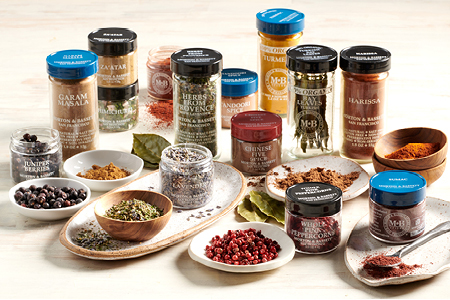 When it comes to spices, rubs and seasonings are growing because “people want to ‘wake up’ their meat and vegetable dishes,” says Sofia Chambers, category manager of main meals and enhancers for Giant Food in Landover, Md.

Turning On to Tajin

Tajin is poised to become one of the hot spice blends of this year, according to the Food Network. This three-ingredient seasoning has been known to Hispanics for decades, but it’s becoming a staple here in the U.S.

Made from salt, mild chiles and lime, it’s designed primarily to pair with fruits—but also vegetables—to enhance their flavor. Because of this, it’s often merchandised in the produce department. It’s best with pineapple, mango or watermelon, says Javier Leyva, corporate director of Tajin U.S., which produces several varieties of the condiment. Consumption is up because consumers want to try new flavors and are more adventurous, he says: “It’s like a party in your mouth.”

Za’atar, a spice blend from the Middle East, is having a moment. Its three main ingredients are thyme, sesame seeds and sumac, but different versions feature other additions.

Kara Nielsen, a food trend expert in Oakland, Calif., sees a bright immediate future for za’atar, mostly because it can go with anything, from meat to yogurt.

Za’atar is one of the bestselling products from Villa Jerada in Seattle, which has products sold in traditional grocery stores and specialty stores, either in the ethnic aisle or the spice aisle. The company’s founder, Mehdi Boujrada, prefers the latter because he says it makes them easier to find. “People are trying to make food a little bit more exciting, and they’re wanting to replicate restaurant food,” he says.

Also popular, he says, are dukkah (a blend of hazelnuts, coriander, cumin, cayenne, salt and sesame seeds) and ras el hanout, a blend that includes a hint of rose and lavender mixed with cardamom, galangal, mace, saffron, fennel and monk pepper.

Webster believes dukkah “will continue to grow but is still really on the fringe,” but says “it can work across sweet and savory applications.”

On the condiment side, Boujrada says his hands-down bestseller is harissa, a paste produced from chile peppers, oil and spices, fresh mint, tomato paste and preserved lemons. Many of these products have gone mainstream too. McCormick now offers organic za’atar and harissa seasonings.

Forget ketchup, mayonnaise and mustard. What consumers need in their cupboard is chile crunch. “It’s crunchy and hot and oily,” says Nielsen.

You can put it on anything, she says, from chicken to rice and ice cream, “the texture being the new thing younger generations especially crave, for just more sensory stimulation,” Nielsen says.

As the 2020 Summer Olympics draw near, there is an increased desire for Japanese foods and flavors. “Any type of Japanese seasoning blend will continue to grow, including furikake, togarashi and shichimi togarashi,” says Webster. “We’ll probably see the bump in interest similar to the Olympics in Brazil, but the difference is, a lot of elements of Japanese cuisine are already more familiar to Americans than most Brazilian cuisine, so we’ll be diving deeper.”

The Fresh Market recently introduced a kewpie Japanese mayonnaise, which Richmond says customers are using as a dressing for sushi and on salads and vegetables.

The Fresh Market offers a variety of local barbecue sauces, specific to regions such as Kansas City or New York, which “has inspired our guests to explore different flavor profiles,” Richmond says.

Consumers now are more aware that there are significant differences in BBQ from one state or region to another, Webster says. “Nashville hot, in particular, is enjoying increased awareness and interest because of its hot profile, which fits well with Americans' continued interest in hot-spicy flavor profiles,” she says.

The functional foods movement is driving this, says Webster, as well as fermented foods’ prevalence in growing cuisines such as Korean. “Kimchi will continue to do well and we’ll likely see more iterations—authentic and completely reimagined—as it grows in availability and interest,” she says.

Webster also believes the Olympics will increase awareness and interest in Japanese fermented food vs. Korean, “so we’ll likely see a rise in application of miso, bonito flakes and shoyu, as well as increased use of far lesser known—in America—options such as umeboshi and koji.”