Fresh beef has always been a grocery mainstay: It has survived numerous wars on red meat, depressions and recessions, Mad Cow disease scares and a variety of other roadblocks that could have easily been its downfall. But what does the future look like for the reliable staple as the rise of e-commerce, plant-based foods and even new tariffs make the fresh meat landscape even more complicated than it was before?

The issue is a crucial one, because meat has one of the largest drivers of basket cost. According to the joint Food Marketing Institute (FMI)/Foundation for Meat & Poultry Education & Research 2018 Power of Meat report, when meat is in the basket, the average spend more than doubles, from $32 with any item to $68 with meat.

While keeping up with the changing market may seem daunting, retailers can look at the upcoming years as an opportunity for innovation and reinvention as long as they stay apprised of the nuances affecting every aspect of the grocery store.

Meat Is Moving Into E-Commerce

One of the assurances grocers have always gotten from industry experts in regard to growing competition with e-commerce is that their basket-driving fresh section will not be severely affected, because consumers tend to be wary of buying fresh items, and especially meat, online. But this may no longer be necessarily be true as meat makes its way into web-only markets, which could potentially boost consumers’ confidence in purchasing these items online.

For example, online better-for-you grocer Thrive Market moved out of its CPG comfort zone in April to include frozen beef, poultry and seafood, and websites such as 1000ecofarms.com connect consumers with local farm-raised meat and other farm-fresh items. Meal kits also often contain fresh meat as a key ingredient.

However, grocers are firing back by amping up their delivery programs and rolling out innovative apps that attract convenience-seeking consumers.

The App Makes the Retailer

The future of mobile retail food apps indeed looks bright, according to a forecast from eMarketer, which primarily focused on apps that deliver perishable items and meal kit provider. It predicted that one in five adult mobile-commerce buyers will use these apps to order food by next year. This is because “shoppers are becoming more comfortable with ordering online in general, and grocery is a part of that,” says Patricia Orsini, eMarketer senior analyst.

While delivery time and the desire to hand-pick items such as meat has been a deterrent against ordering fresh items online in the past, Orsini says, “Retailers have been able to transcend these barriers with click-and-collect models of delivery.”

The report credits the newfound acceptance of meat delivery to retail giants such as Amazon/Whole Foods and Walmart, which are propelling grocery delivery into the future with new innovations and a focus on seamless integration.

For example, Walmart is testing third-party drivers to complete last-mile deliveries; both Walmart and Kroger are piloting self-driving cars; and Amazon launched its Prime Now app for grocery deliveries, with rapid expansion underway.

However, even smaller retailers can benefit from this growing trust in fresh grocery delivery if they join the “app race,” according to Orsini, who says if the shopper is ordering from their regular grocery store, the “familiarity helps with trust that the products will be the quality they expect.” However, a bad experience could turn consumers off for good, “so retailers need to ensure they provide a good experience from day one.”

One way that retailers can build this trust with its customers is to offer beef that meets their values. In the past, that was organic, says Arcadian Organic and Natural Meat Co. CEO Alister Ferguson, and then it was organic plus grass-fed, and more recently it has been “about welfare and certifications such as certified humane and non-GMO project approved,” he says. 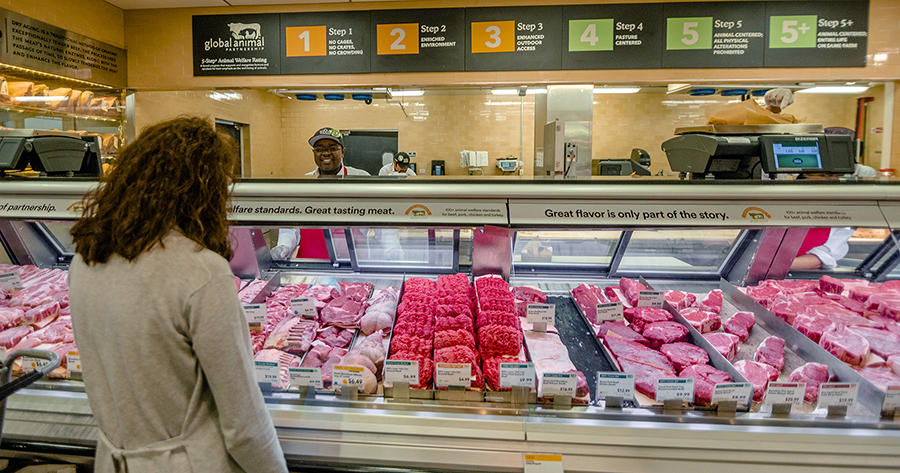 Catherine Golding, business development with True Aussie Beef and Lamb, seconds that, advising that as people become savvier about their food choices, beyond quality and price they are becoming concerned with “how their meat was raised and its impact on their health and well-being,” she says.

“People are increasingly expecting ethically raised meat, including hormone-free, natural, vegetarian-fed and grass-fed as a given,” says Golding, adding that retailers should “increase their assortment accordingly, providing more open information to help shoppers make better decisions in-store and ensuring that staff is more knowledgeable than ever about their offerings,” as well as asking the same questions of suppliers that customers would ask, such as where and how the beef was raised.

Additionally, Golding says consumers are increasingly willing to try new cuts of beef beyond the mainstream, but that also must be accompanied by explanations and tips to ensure folks know what they are buying and that they are cooking the items correctly.

Data from the Power of Meat study backs up Golding’s point, affirming that while more than eight in 10 shoppers buy only a few different cuts of meat and poultry, 42% would be willing to try something new if they were advised to do so.

“We know that many shoppers are reluctant to ask questions in the meat department,” Golding says. “This is a miss and should be addressed with better in-store navigation, including efforts to make the meat section more inviting and engaging. Since ‘shopping starts before the store,’ the philosophy of helpful education should extend to the grocer’s digital, mobile and social platforms too.”

“This provides opportunity for grocers to do more than just sell ingredients but offer up full solutions for key occasions as we enter the holiday season,” she says.

Expanding on the importance of trust, food safety snafus are one of the easiest ways to compromise loyal customers’ confidence in their decision to purchase meat from a retailer or restaurant.

For example, Chipotle’s cult following is losing steam following multiple foodborne-illness incidents over the past few years. The latest was linked to an Ohio location that was reported to have triggered more than 600 cases of food poisoning in late July as a result of a bacteria that grows on meat kept at unsafe temperatures. The incident forced the restaurant chain to retrain its staff nationwide, prompting its shares to drop drastically in the days following the reports.

Additionally, Lakeland, Fla.-based Publix Super Markets had its own meat-related incident when it recalled an undetermined amount of ground chuck, including premade burgers and meatballs, believed to be contaminated with E. coli in late August. The meat is suspected to have caused 18 illnesses, according to the USDA.

“Food safety is our top priority,” said Maria Brous, Publix’s media and community relations director, in a statement at the time of the recall. “We have been working closely with various federal agencies as we share the common goal of maintaining food safety and public health.”

While these types of recalls may be a retailer’s worst nightmare and tend to originate on the supplier side, the best way for a grocer to deal with the situation is to communicate with its customers and pull contaminated products from the shelves as quickly as possible, as Publix did.

And there are resources out there to help retailers in their time of need. For example, FMI offers a Rapid Recall Express program that provides grocers with the information needed to quickly remove questionable products from their shelves, receive recall or withdrawal information directly from suppliers, and have access to a 24-hour crisis support. FMI also gives its members access to RevenueShield insurance, which is specially tailored for food retailers and focuses on recall and contamination coverage.

President Trump’s trade war has been a concern for agricultural industries such as soybean farming, but its projected influence on beef prices is causing confusion.

While beef is not a major Chinese export, a slowdown in imports to China and other countries related to the tariffs could have an influence on the category.

According to a report from the Wall Street Journal, there is a surplus of meat in the U.S., with more than 2.5 billion pounds of beef, pork and poultry sitting in cold storage.

The growing stockpile is in part due to lower feed prices, which has allowed cattle farmers to up production to a point where demand and storage space cannot keep up with the supply. As exports become more complicated, the surplus could mean a modest drop in meat prices. For reference, Burt Flickinger III, managing director of New York-based Strategic Resource Group, told USA Today that there may be a 5% drop in prices initially, but it will likely max out at 12%.

On the other hand, representatives from the National Cattlemen’s Beef Association have shown concern for how the tariffs will affect their operations.

Kent Bacus, director of international trade for the National Cattlemen’s Beef Association, said in an interview with CNBC that major exports for the beef industry include cuts such as beef tongues and short ribs that Americans shy away from but consumers in several Latin American and Asian countries embrace.

“We’re worried that the repercussions of some of these tariffs is essentially going to squeeze us out of the market,” Bacus said.

With football—and tailgating—season underway, opportunities for promotions are plentiful. For example, Golding of True Aussie Beef and Lamb says a retailer-partnered campaign that “showed really strong results” was a program created with Stop & Shop in which multiple stores in the New England area hosted tailgating events in their parking lots, complete with “giant TV, couches and a BBQ serving up True Aussie Beef and Lamb all while watching the New England Patriots’ kickoff game.” 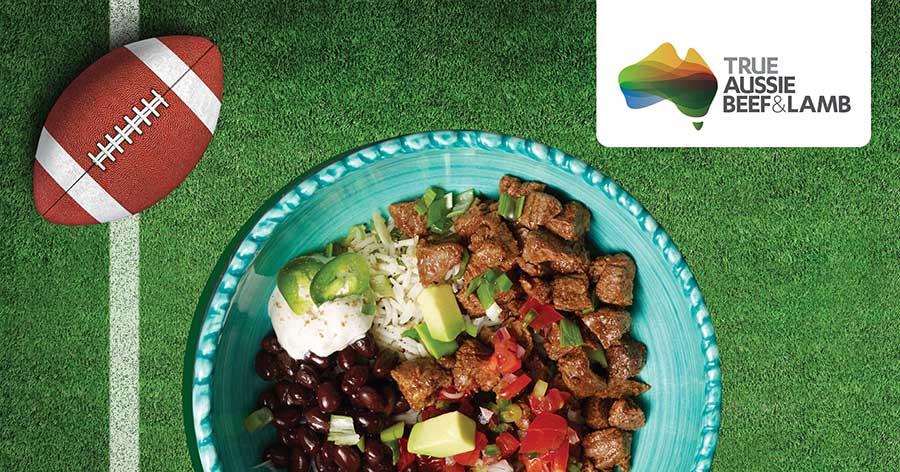 The events were promoted extensively with a full-scale social media campaign and pre-event PR placements.

Additionally, Hy-Vee incorporated tailgating into its Family Meals Month program this September, giving away more than $10,000 in vouchers for its private label meal kits to families its retail dietitians saw cooking beef at tailgate gatherings during 16 college and NFL games in the upper Midwest.

The Beef Checkoff Program’s popular “Beef. It’s What’s for Dinner” campaign has re-emerged in-store with the launch of steak bowls. Created in partnership with the American Foods Group, steak bowls debuted in the meat departments of select grocery stores last winter, with plans to expand to 1,500 retailers in the coming months. The meal kits boast USDA choice beef that readily lends to on-trend recipes such as Korean bulgogi bowls and steak bowls made burrito, tzatziki and mash style. 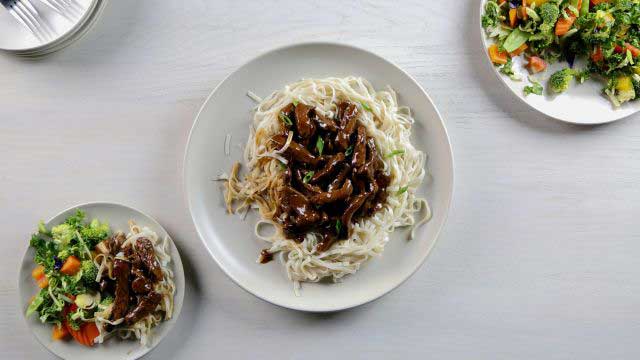 “We are really excited to see these beef meal kits come to fruition,” said Shenoa French, director of manufacturer engagement for the National Cattlemen’s Beef Association, a contractor to the Beef Checkoff. “Beef. It’s What’s For Dinner understands that people want quick, delicious, healthy options, and we are happy deliver that in one package that people can be excited to serve to their loved ones.”