From time-honored cheddar to European-inspired to farmstead gouda, Wisconsin is turning out a staggering array of exceptional cheeses, the depth and breadth of which extends from artisan examples to 40-pound blocks and everything between. While production techniques and quantities vary, a unifying commitment to quality and collaboration has propelled a new definition of American cheese.

Wisconsin’s nearly 1,200 licensed cheese makers produce over 600 types, styles and varieties of cheese, which totaled 3.2 billion pounds in 2016, according to the state’s Department of Agriculture, Trade and Consumer Protection (DATCP). And production is increasingly specialty. Wisconsin makes nearly half (47%) of the nation’s specialty cheese, with production in this category increasing 7% in the past year, according to the USDA. At the same time, IRI data shows that volume sales of specialty cheese nationwide have grown five times as fast as the cheese category overall in the past year.

“The Wisconsin cheese category continues to grow each year, as consumers are experimenting with cheese in new applications, reaching for cheese as a gourmet snack or featuring Wisconsin specialty cheese on a beautifully crafted cheese board,” says Lizzie Duffey of the Wisconsin Milk Marketing Board (WMMB) in Madison, Wis. Supermarkets, cheese mongers, industry organizations and cheese makers themselves are all playing an important role in educating the consumer about the high-quality specialty cheeses made in America’s Dairyland—and, more importantly, translating those lessons into sales. 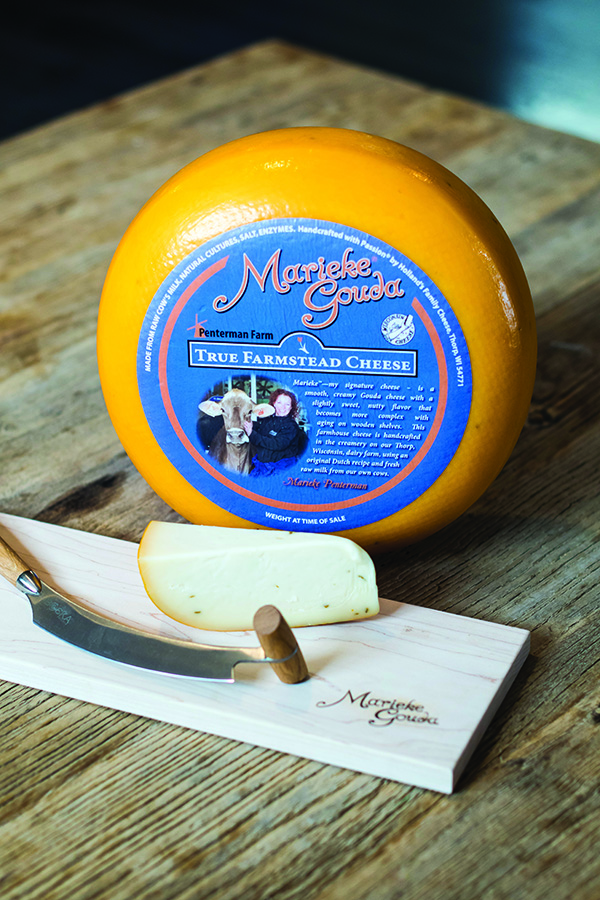 At Skogen’s Festival Foods, an Onalaska, Wis.-based family- and employee-owned company with 31 full-service supermarkets, shoppers are purchasing Wisconsin cheese with gusto for every eating occasion. “In the past quarter alone, 39 out of 50 of our top-moving cheese items in the deli department were produced in the state of Wisconsin,” says Deli Specialist Kyle Kress. “This is a direct reflection of [Wisconsin’s] focus on local products,” as well as its “stringent quality standards from farm to table,” he says. Festival Foods actively promotes Wisconsin cheeses in its stores throughout the year. Its weeklong Cheesefest promotion focused on specialty cheeses each fall has been especially successful. Kress attributes the event’s success to the stores’ partnership with its vendors, as well as daily cheese sampling. “Without sampling some of these items, our guests might skip the purchase and stick with a more traditional flavor of cheese,” he says.

“Whether it is an elaborate product demonstration or passive sampling, the biggest sales driver is getting Wisconsin cheese in the mouths of the shopper,” says Duffey of the WMMB. Sampling is also critical because while shoppers appreciate quality, they may be inclined to purchase on price if they haven’t tried a particular cheese before. “Today’s consumers are demanding quality in all foods, not just specialty cheese,” Kress says. “Products from our great state have had a strong reputation for quality, as well as value, which can be attributed to the hard work of our dairy farmers, manufacturers and marketers.” Kress also cites Wisconsin’s best management practices and regulatory requirements—which help to ensure all cheese and dairy products begin with quality milk—as a driving force in making Wisconsin cheeses competitive on the world stage.

In addition to working with its vendor partners and distributors to promote Wisconsin cheese, Festival Foods works closely with the WMMB, which provides signage and other support to promote Wisconsin-made dairy products, such as Festival’s sought-after cheese curds. “Promoting local cheeses is a huge deal in our stores,” says Kress. “In all of our markets, we offer locally made, fresh cheese curds that are so squeaky, dogs are barking! These products are market-specific, made fresh and delivered to us to merchandise within 24 hours of production.” 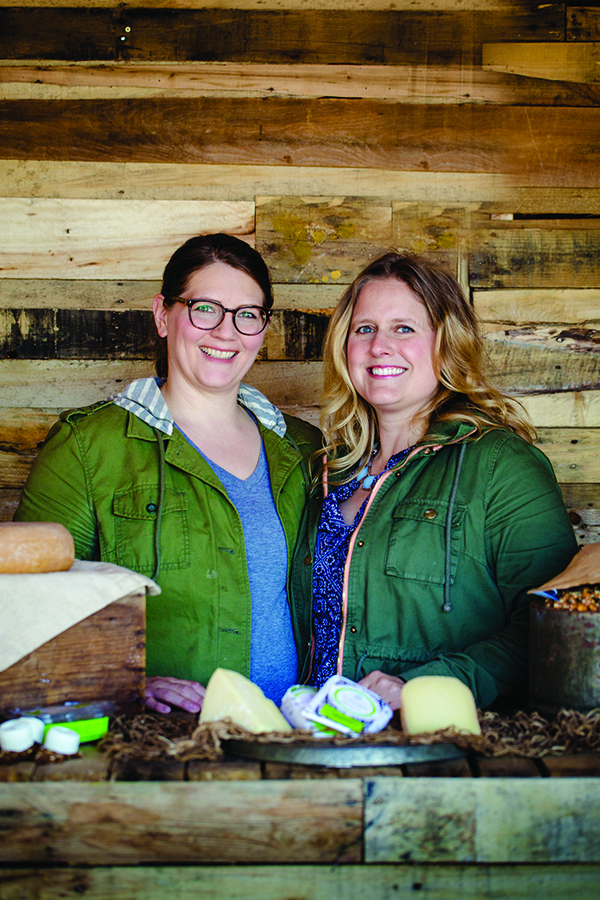 A number of Wisconsin’s artisan cheese makers who have opened their own retail shops report that directly connecting with customers has made them better cheese makers and more responsive to market demand.

Winning Over the World

The Wisconsin Cheese Makers Association’s (WCMA’s) premier event, the World Championship Cheese Contest, took place in March with a record number of entries. The event, held every even-numbered year—along with the U.S. Cheese Contest, which takes place every odd-numbered year—has launched the careers of countless Wisconsin cheese makers. “Wisconsin is the No. 1 source of entries for the contests,” says Rebekah Sweeney, communications and policy manager for the WCMA. “It’s interesting because Wisconsin does cheeses like mozzarella, colby and cheddar blocks really well, but it also does specialty cheeses exceptionally well.”

So well, in fact, that everyone wants a piece of the action. A whopping 90% of Wisconsin’s specialty cheeses are shipped out of the state, according to the WCMA. Whether it’s an award-winning Grand Cru from Emmi Roth, a farmstead cheese from Marieke Gouda or last year’s U.S. Championship Cheese Contest winner, the Sartori Reserve Black Pepper BellaVitano, Wisconsin cheeses are champions. “Quality wins every time, whether it’s Wisconsin specialty cheeses or shingles in the dairy aisle,” says Sweeney. “You see the best cheese makers in Wisconsin—those interested in honoring an old-world sensibility, but at the same time, those cheese makers trying new ingredients who are nimble enough to make changes that will be popular in the marketplace.”

For the Sartori Cheese Company in Plymouth, Wis., last year’s U.S. Championship Cheese winner, that means staying on flavor and ahead of trends. “Single-serving cheese and snacking continue to be top trends, along with bold flavor additions,” says President Jeff Schwager. Sartori’s newest cheese, MontAmore Cheddar, is what Schwager calls “an old friend with a new twist. We have changed the packaging and rebranded MontAmore as an artisan, Italian take on white cheddar.” He says the company plans to focus on the relaunch of MontAmore Cheddar this year with strong in-store support, increased demos and a dive into shopper marketing.

“At BelGioioso Cheese, we marry traditional Italian cheese-making methods with New World technology, and our own artisan production methods,” says Oscar Villarreal, VP of marketing for BelGioioso Cheese in Green Bay, Wis. Founded by Errico Auricchio, whose vision to craft the best Italian cheeses in the U.S., the company was born from a search for America’s highest-quality milk. When he started the company in 1979, Auricchio brought two Master Cheesemakers from Italy. Mauro Rozzi and Gianni Toffolon, BelGioioso’s original Masters, continue to share their wisdom and expertise with each new generation of cheese makers. BelGioioso now boasts six Wisconsin certified Master Cheesemakers on staff, and two more cheese makers currently in the Master program.

“The industry continues to innovate and grow, with cheese makers investing back into their businesses within the state. You are seeing construction of new plants and expansions of existing ones,” says Villarreal, whose BelGioioso recently opened a new facility. For Emmi Roth in Fitchburg, Wis., its ties to Switzerland are as deep as they are delicious. “Switzerland and Wisconsin have been connected through cheese making for decades,” says Director of Marketing Heather Engwall. “Home to Roth Cheese, Green County, Wis., is known as the ‘Swiss Cheese Capital of America,’ where Swiss cheese factories line the countryside throughout the region.”

Emmi Roth’s connection to Switzerland is rooted in the early 1900s, when Otto Roth immigrated to the U.S. to start Otto Roth & Co. and began importing Swiss cheeses into America. In 1991, the company became Roth Käse USA, and imported the first copper vats into the U.S. from Switzerland to make its signature Grand Cru alpine-style cheeses in Wisconsin. Most recently, Emmi Roth has introduced Roth Snack Cheese, which is made using its well-established specialty cheese standards, including fresh, local rBST-free milk. Emmi Roth also launched a Roth Organics line last year that is available in gouda, Grand Cru, havarti and aged cheddar. All are GMO-free, vegetarian and certified organic.