Some say yogurt is a practically perfect food. It boasts a velvety-smooth texture, sweet and savory flavor profiles, and countless health benefits that leave the consumer feeling full and satisfied, all at a remarkably low price—and yet sales are sour.

In the last year, yogurt sales declined 2.7% in the 52 weeks ending Oct. 28, according to New York-based research firm Nielsen. The $7.5 billion category has been plagued with oversaturation as brands have imitated the same yogurt styles, flavors, packaging and marketing approaches, making it nearly impossible for consumers to differentiate their products.

“It’s not the first time the yogurt category has stalled,” says industry expert Gary Stibel, CEO of the New England Consulting Group (NECG), based in Norwalk, Conn. “What’s needed here is innovation and fresh thinking, and we see several of the players here are doing that.” While the yogurt category has experienced several periods of slower growth in the past, there has always been a major brand that’s emerged at the forefront, Stibel says. Chobani revolutionized the category over the past 10 years with its push for Greek yogurt, but new category entrants following its lead have led to saturation, resulting in Greek yogurt dollar sales declining 4.4% as of Aug. 27, per Nielsen.

Repetition and confusion in the yogurt aisle have caused consumers to base their purchases on price alone. “Everything was on sale,” Stibel says. “So people started making decisions based on price—because when you’re confused, price is a common denominator.” The weighted average price of 4- to 6-ounce yogurt and Greek yogurt was 49 cents and 95 cents, respectively, for the period ending Jan. 5-11, according to the USDA’s National Retail Report-Dairy, with conventional yogurt ad numbers increasing 62% during that time. For a competitive category in which brands distinguish themselves solely on price, this has left little room for profitability. “It’s the worst thing that can happen to a category that’s growing,” Stibel says.

To combat consumer confusion in the yogurt aisle, retailers must simplify the shopping experience by reducing the number of repetitive products, managing shelf space more effectively and clearly communicating product attributes and differentiations to the consumer.

In 2014, Whole Foods Market took a stance against redundancy on its yogurt shelves. The retailer stopped selling Chobani yogurt to reportedly make more room for smaller brands and organic and non-GMO options, while also challenging its remaining suppliers to create distinguishable yogurt varieties. And though Whole Foods welcomed Chobani back to its shelves last summer, the yogurt company has since reinvented itself with a new packaging redesign and product offerings, including its new Smooth yogurt line, appealing to consumers who have abandoned the Greek-style variety. “They had to do something to stay ahead of the curve,” says Stibel, “because to not do that allows the brand to be commoditized.” 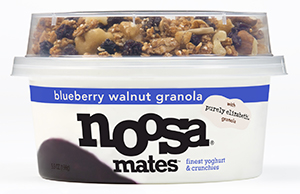 Nonetheless, conventional yogurt companies remain vulnerable as smaller yogurt brands such as Noosa Yoghurt continue to gain traction among consumers. Based in Bellvue, Colo., Noosa touts itself as an artisanal, small-batch yogurt producer with unique flavors and textures. To break through the category’s clutter, the company heavily invests in grass-roots sampling programs to ensure shoppers can differentiate its product from others. “The yogurt category is … highly promoted, and it’s tough to find a yogurt aisle that isn’t full of shelf tags pointing to a discount,” says co-founder Koel Thomae. “We find unique ways to run promotions to connect our marketing communication all the way down to store level.”

While Chobani had Americans going Greek for years, there’s a new wave of foreign yogurts causing a stir. General Mills’ Yoplait brand introduced its French-style Oui by Yoplait line over the summer, providing a necessary breath of fresh air to the cluttered category. “It had been 10 years since the last major disruption in the category, and consumers are looking for something new in yogurt,” says Kris Patton, spokesperson for Golden Valley, Minn.-based General Mills.

Inspired by a Yoplait traditional French recipe that was previously available only in France, the new line is made with whole milk, pure sugar cane and real pieces of fruit. Unlike conventional yogurts, Oui by Yoplait is designed to be spoon-cut slowly, not stirred, in order to preserve its thick, subtly sweet taste, and is uniquely packaged in a French-made glass pot in which each serving is individually cultured to protect the delicate texture of French-style yogurt.

Even before the Chobani-fueled Greek yogurt craze, foreign-style yogurts were a category staple. In fact, Yoplait was originally considered a French-style yogurt upon its initial U.S. launch in the 1970s. Since then, global yogurt varieties have gained allure among consumers under the perception of having a higher, healthier quality than conventional yogurts. But after decades in the U.S. marketplace, major brands have become Americanized, leaving room for smaller players to step in. “As brands become more American, they leave a void for others to occupy,” says Stibel. “It doesn’t have to be made outside the country—it just has to sound like it was made outside the country.”

Indeed, there has been a resurgence in the foreign-yogurt segment beyond the ways in which the product is made. Consumers are interested in the story behind a brand and are particularly drawn to those with foreign backgrounds, such as Noosa, whose roots stem from Australia. “There is definitely a current shift in the yogurt category,” says Thomae of Noosa. “When we launched Noosa in 2010, the category was dominated by Greek and more functional offerings from players like Chobani and Yoplait. Now, the mainstream category is declining.”

Once reserved for breakfast occasions, yogurt is migrating into new dayparts to keep up with evolving trends for on-the-go and healthy lifestyles. Brands are pushing the use of yogurt as not only an end product, but also as a dessert substitute and ingredient replacement.

The inclusion of yogurt in everyday meal recipes has helped the category expand into new, savory flavors, as well as rekindle consumers’ relationship with Greek yogurt. “Plain Greek yogurt seems to trend steady all year, as consumers use that for a substitute for other condiments, or add their own ingredients and toppings,” says Teena Buholzer, marketing director at Klondike Cheese Co., based in Monroe, Wis., adding that traditional and savory dip flavors used for chips, vegetables or meat condiments have similar attributes to Greek yogurts, which allow consumers to snack more healthily. To tap into this trend, Klondike has promoted Greek yogurt-based recipes, such as its Odyssey Feta Garlic Dip, featuring Klondike’s Odyssey Greek Yogurt, feta cheese, reduced-fat sour cream and garlic for a savory, Mediterranean-inspired dip alternative.

But perhaps the most innovative trend in the yogurt migration is the resurgence of mobile formats. “Drinkables have been around for a long time, but drinkable is finally growing,” says Stibel. The category’s standard cup-and-spoon format has posed a barrier that few companies have overcome to satisfy consumer demand for convenience. “Eating yogurt out of a cup is not inconvenient, but it does require two hands,” Stibel says. “The potential for solid yogurt bars [and] drinkable yogurt [is] out there, but the growth opportunity here is far greater than any of the proud players have taken advantage of.”

General Mills, however, was up for the challenge. The yogurt producer enlisted a packaging company to improve the tubes for Yoplait’s Go-Gurt line, using laser technology to develop EZ Open, tearable packaging, made simple for kids and parents alike. The company’s website dares its consumers to “Confidently return your Go-Gurt scissors to the desk drawer. Fearlessly pack Go-Gurt in every lunch box. Heroically bring a box of Go-Gurt for the after-game snack, because now there is no struggle to get those things open.”

Healthy Fats Are Back

With growing interest in nutrition and wellness across all food categories, both retailers and manufacturers are striving to educate consumers on the health benefits found in yogurt. Bethpage, N.Y.-based King Kullen offers a full page of nutrition tips and healthy eating information on its website to convey yogurt’s nutritional value, featuring visual chart components and an easy-to-follow guide on substituting yogurt for ingredients. According to the retailer’s website, Greek yogurt is an excellent source of vitamin D and provides double the protein of regular yogurt, which helps consumers feel satiated. 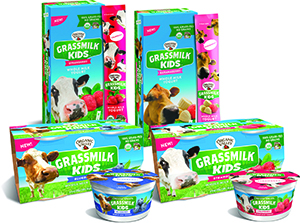 Consumer health trends are also driving the organic yogurt category, which was the only yogurt segment to boost dollar sales (10%) over the last year, according to Nielsen. “The most striking trend is the overall decline of conventional yogurt sales versus the continued growth of organic yogurt and, in particular, 100% grass-fed yogurts,” says Andrew Westrich, brand manager for Organic Valley, based in La Farge, Wis. The company’s yogurt line is made from the milk of 100% grass-fed cows, offering a balance of healthy omega-3 and omega-6 fatty acids. “Consumers have become aware of the many benefits of grass-based dairy and are clearly looking for more ways to incorporate it into their diets,” Westrich says.

Once deterred by yogurt’s fat content, informed shoppers now welcome healthy fats into their diets, marking a victory for the category as a whole. Yogurt is also at the front of the probiotic movement as more American consumers take an interest in digestive health. According to a report by the University of Wisconsin at Madison College of Agricultural and Life Sciences, funded by the National Dairy Council, eating yogurt on a regular basis may help reduce measures of chronic inflammation in women and support a healthy digestive system.

“As Americans learn more about gut health—and as millennials start having kids and wanting to do things more naturally, more nutritiously and not indoctrinate their kids to a sugar diet—we think that you’re going to see health take an increasingly more forward role,” Stibel says. “We think yogurt is going to be at the forefront of bringing together healthy, great-tasting food.”