“What’s different today compared to 100 days ago?” asked Marc Perrone, president of the United Food and Commercial Workers (UFCW) International Union, on a national press conference call Thursday. Not enough with regard to reinstating hazard pay, enforcing mask wearing and reporting worker illness and death, says the UFCW, which represents 1.3 million retail food, meatpacking and food processing employees, as well as healthcare and pharmacy workers, across the United States and Canada. 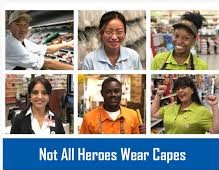 While COVID-19 cases continue to rise, particularly in hotbed areas such as Texas, Arizona and Oklahoma, most food industry employers have eliminated hazard pay. “The fact is COVID-19 and [the] crisis that it created hasn’t passed. It still is very real,” said Perrone.

With regard to safety standards such as requiring a mask, it’s a mixed and erratic bag, reports the UFCW. “In some states and cities and counties, they’ve established some safety standards like requiring mask, and others, you know, don’t have any standards at all and no requirements,” he explained.

The UFCW, which has lost 238 of its member workers to COVID-19 and reports some 29,000 of its members in the grocery, meatpacking, food processing and healthcare industries have been infected or exposed to the virus, is also adamant that nonunion companies report deaths, infection and exposures.

In grocery stores across the country, there have been at least 82 worker deaths and 11,507 workers infected or exposed, according to the UFCW. April experienced the highest single-month total for grocery worker deaths with 46 supermarket employees killed by COVID-19. While May saw the grocery industry’s biggest overall spike in COVID-19 cases, with 5,901 new grocery workers infected or exposed.

During the press call, Perrone announced three new initiatives in response to the growing increase of COVID-19 cases in states across the country that it pledges to pursue in the coming weeks.

The initiatives include reinstating hazard pay and setting a $15 per hour wage for all front-line workers; establishing a public mask mandate in all 50 states; and the creation of a new national public registry to track COVID-19 infections in front-line workers, which would require companies with more than 1,000 employees to submit monthly reports on their worker deaths, infections and exposure.

To further promote masks, the UFCW says it will call for every state and county government to mandate the wearing of masks in public places. In partnership with leading health experts, the union is set to launch a targeted ad campaign promoting mask wearing that will begin in Ohio.

“The human cost of this terrible pandemic can’t be ignored, nor should it be hidden,” said Perrone. “American workers simply cannot survive with the current patchwork of safety measures taken by only a fraction of companies and states with millions still unprotected and vulnerable.”