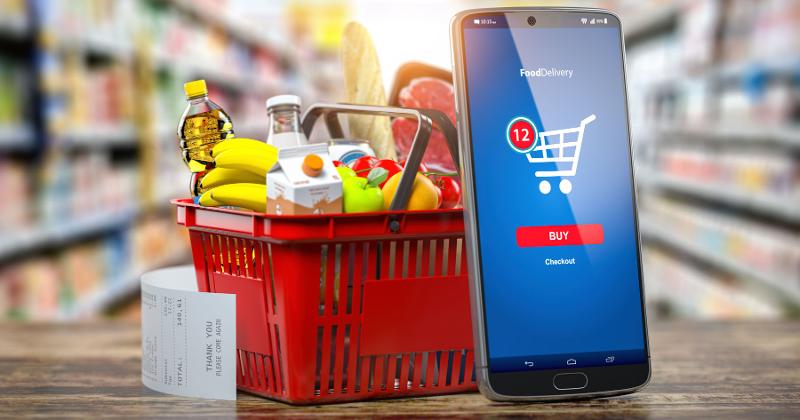 The pandemic dramatically changed the trajectory of online food purchases in 2020 but there’s significant room still to grow, according to new figures presented by NielsenIQ during the FMI Midwinter Executive Conference this week.

Nielsen, which caused a stir when it projected at the same event three years ago that U.S. consumers would spend $100 billion on online groceries by 2024—this week said the $100 billion figure was likely to be reached this year. 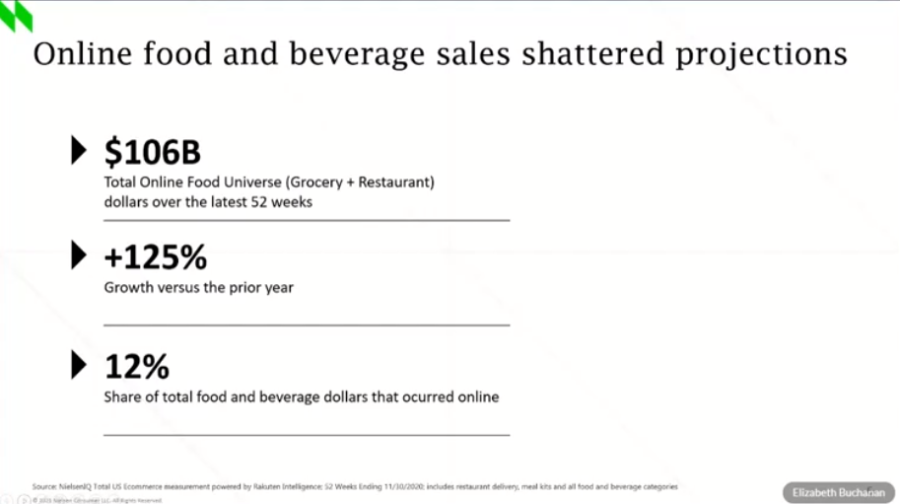 The 2018 projection was among the catalysts of an industrywide move to invest heavily in infrastructure to allow physical store retailers an opportunity to share in that bounty. Online grocery sales in 2020 were about $66 billion, representing a 125% year-over-year gain driven by the pandemic and realized among large players such as Walmart, Kroger and Amazon; click-and-collect offerings from legacy grocers; and the combined sales of retailers partnering with Instacart, who collectively trail only Amazon as the nation’s largest online grocery seller.

Elizabeth Buchanan, head of consumer intelligence, North America, for NielsenIQ, in a live-streamed presentation of the results reiterated how the pandemic became online grocer’s big boom, saying behavioral changes and restrictions intended to blunt the spread of the virus forced millions of Americans to consider shopping that way for the first time.

“I myself might not have been open to e-commerce grocery in the past had it not been a necessity in evolving my behavior in 2020,” Buchanan said. “One of our most important findings is that [sales volumes] of specific stores dramatically shifted in 2020, and this had pretty significant implications for the grocery business overall.”

Stores offering click-and-collect saw a 130% increase in orders and 113% increase in customers during 2020, a phenomenon Buchanan said offered familiarity and simplicity to shoppers as they adapted to new fulfillment and for many, a new environment and working and shopping at home.

“This provides shoppers peace of mind on things like delivery fees, and on scheduling and timing—not having your groceries arriving during a conference call and sitting on your porch for an hour, as I regret has happened to me more than once—and the ability to ensure they show up with high-quality. You know your frozen items will stay frozen since you’re just transporting them from the store to your home as you normally would,” Buchanan said.

Instacart’s growth, Buchanan added, reflected its ability to get physical stores into the online game quickly, including small independents and large players such as Wegmans, Publix, Aldi and Costco. “Instacart had a huge year,” she said. 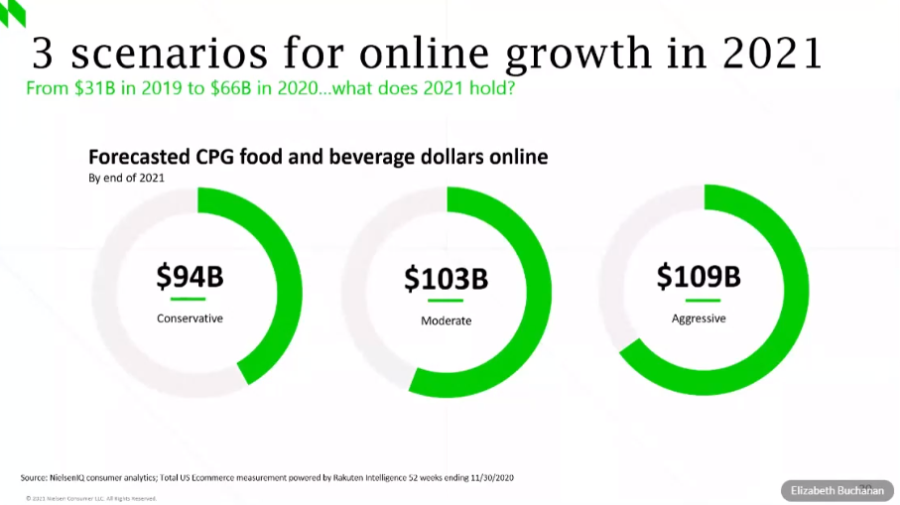 Several factors are at work in NielsenIQ’s prediction that online grocery could account for sales of between $94 billion and $109 billion in 2021—respectively conservative and aggressive estimates that could pivot on an economic recovery, consumer confidence and the COVID-19 vaccine rollout, Buchanan said.

“The three factors that will most impact online expansion in 2021 will be the industry’s collective ability to attract new shoppers, retain existing and grow overall spend. Tech will be a primary catalyst for helping manufacturers and retailers drive incremental growth in 2021,” she said. “Looking ahead, the next horizon to conquer will be ownership of omnichannel. For this, an accompanying omnichannel data and technology strategy will be foundational enablers to progressing through the continuum.”

In her presentation, Buchanan said shoppers who become more comfortable with online spending will increase the percentage of their shopping done through that channel. And as COVID restrictions ease, shoppers will also do more shopping in-stores, she added, putting an emphasis on executing an omnichannel offering and not one or the other. “It’s a both thing,” she said.

One phenomenon supporting increased food spending, in the meantime, is the swatch of consumers who find they have more disposable income—but fewer places for it to go—in the midst of restrictions. “They’re not spending outside of the home,” on big-ticket indulgences like vacations, for example, and so are likely to spend more on food experiences. At the same time, a cohort of shoppers are likely to struggle financially in the damaged near-term economy and face a lengthy road to recovery.

This points to an opportunity for retailers to apply segmentation and merchandising tactics they use in stores to an omnichannel approach, she said.