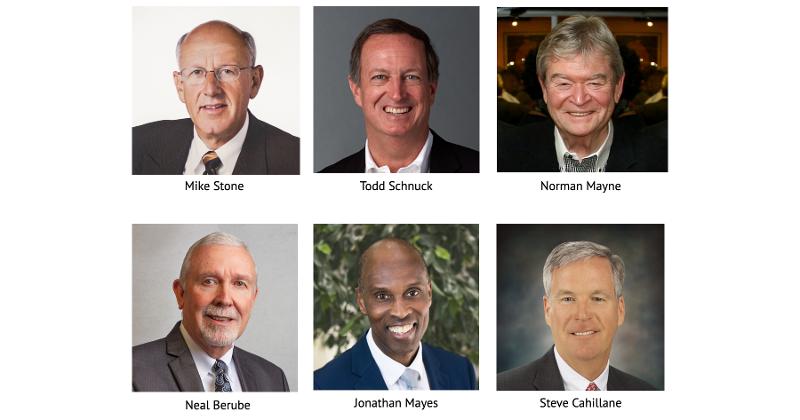 During its Midwinter Executive Conference Awards in Orlando, FMI–The Food Industry Association took the time to recognize six industry executives for their leadership in overcoming a slew of challenges in the past two years.

Those honored include Mike Stone of Mollie Stone’s Markets; Todd Schnuck of Schnuck Markets; and Norman Mayne of Dorothy Lane Market, as well as Neal Berube who is retired from Associated Food Stores; Jonathan Mayes, who retired from Albertsons; and Steve Cahillane of the Kellogg Co.

“From inflation and supply chain challenges to federal mandates and COVID-cautious consumers, food industry executives had the responsibility to navigate a barrage of new and complex issues throughout the last 24 months,” said FMI President and CEO Leslie G. Sarasin. “Their forward-thinking solutions and refined expertise were crucial drivers of the industry’s resilience through turbulent times.”

Mike Stone, president and CEO of Mill Valley, Calif.-based Mollie Stone's Markets, received the Robert B. Wegman Award for Entrepreneurial Excellence for reasons such as supporting the local economy through partnerships with local farms and artisan brands; offering an assortment of organic and specialty products in addition to conventional groceries and full-service departments; and striving to live up to the grocer’s slogan of “Making a difference in people’s lives through food.”

FMI also cited Stone’s generosity, which it said goes beyond the physical limits of his stores. In the past two years, Stone and Mollie Stone’s Markets have donated resources, including financial support, personal protection equipment and volunteers, to hospitals, food banks, schools, first responders and various nonprofits. Stone and his wife also covered the cost for MarinHealth to acquire pressurized tents for testing and pre-entry assessments.

Todd Schnuck, chairman and CEO of St. Louis-based Schnuck Markets received the Glen P. Woodard Jr. Award for Public Affairs for helping to nourishing people’s lives—not just through food. For example, FMI said, when many restaurants were closing their doors due to the COVID-19 pandemic, Schnucks responded with $200,000 worth of gift cards made available to its teammates to use at local restaurants. Then, during Black History Month, Schnuck took a stand for equity and diversity, offering customers the opportunity to donate to the Urban League through the grocery chain’s Round Up at the Register program.

Norman Mayne, CEO of Dayton, Ohio-based Dorothy Lane Market, was given the Sidney R. Rabb Award. Mayne, who grew up working alongside his father, Calvin Mayne, when the family business started as a fruit stand in 1948, has grown Dorothy Lane Market into a three-store independent operator with 1,000 employees. He is also credited for leading the charge on Club DLM in 1995, the store’s hyper-targeted loyalty program.

The Herbert Hoover Award for Humanitarian Service was given to Neal Berube, who most recently was president and CEO of Associated Food Stores Inc. before retiring, and the Esther Peterson Award for Customer Service, was awarded to Jonathan Mayes, who was SVP and external affairs and chief diversity officer of Albertsons Cos. before retiring. Steve Cahillane, chairman and CEO of the Kellogg Co., meanwhile, received the William H. Albers Industry Relations Award.

Separate and apart from the 2022 awardees, FMI president and CEO Leslie Sarasin offered a tribute to the industry and its stewardship through the pandemic, acknowledging the entire industry with a 2021 Esther Peterson Award, which recognizes a lifetime of dedicated service and extraordinary contributions to consumers. “Esther Peterson once said, ‘I want people to believe. I want them to care. I want them to be curious. I want them to look at injustice and ask, What can I do about that? I want them to know that they can certainly make a difference.’ Our industry went above and beyond to serve the consumer during its darkest hours,” Sarasin said.