When dinner is at its best, shoppers say, good memories are made around the table. It is a time when they can unwind, connect with others and enjoy eating a delicious meal together. This may also be the one opportunity during the day for parents to find out what’s going on in their kids’ lives.1,2

Consumers idealize dinner more than any other meal of the day. They see it as a time to stop everything and relax, and a moment when everyone gets to be themselves. Those who plan meals strive to create a positive environment and re-create happy memories from childhood family dinners. But all too often, real life checks in, robbing them of the time they need to plan and shop or the expertise they wish they had to cook meals from scratch.3

When Tyson Foods, Deli Division, asked parents about the practicality of gathering everyone together for a family meal, parents admitted dinner had lost its importance, especially when up against busy schedules and picky palates. But when kids were asked, they gave a different and wholly unexpected response. They liked the expectation of dinner together and had a good feeling knowing there would be a dedicated time of the day when they would all sit down as a family.2 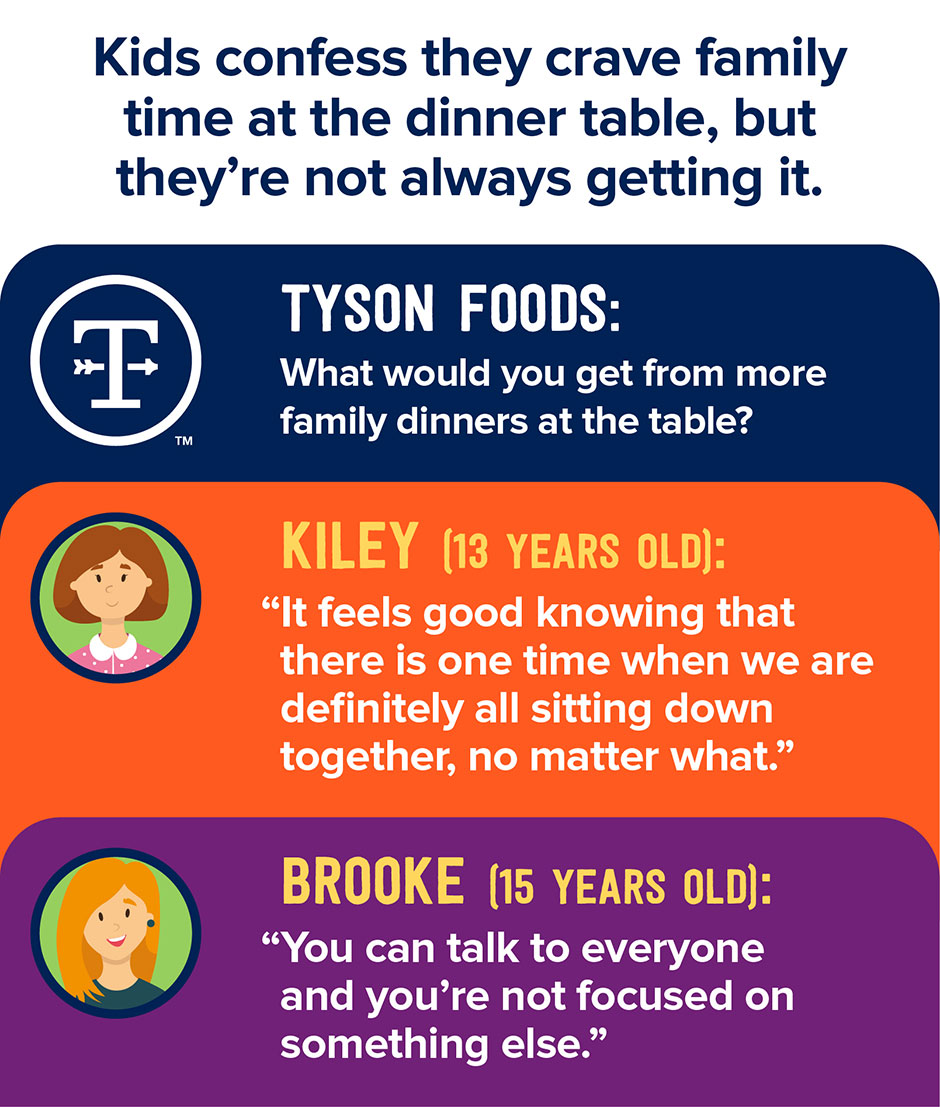 The role of prepared foods at the dinner table

Shouldn’t dinner be more than food? Shoppers have said they’d prefer mealtimes to deliver an experience that fulfills the expectation of something other than mere sustenance. But they routinely settle for less. While the ideal of a satisfying meal is still there, in practice it often falls short.3

Without inspiration, food is only fuel, meals are no more than sustenance and deli is only about convenience. Dinnertime really does mean something to consumers. They’ve made it clear they still want the meal experience. But they’re not confident in deli’s ability to deliver the meals they can be proud to serve. Tyson Foods worked with executives from industry giants such as Disney, Nike and United Airlines to get their opinion on how deli could work better for consumers. They all agreed that the category falls short with shoppers, and further observed that deli has the opportunity to offer solutions based on consumer need states such as occasion, lifestyle and the number of people they’re feeding. First, they cautioned, the category must recognize and correct the failures shoppers encounter in the deli.

The pursuit of a convenient and, to some extent, home-prepared meal is one reason why shoppers turn to prepared foods. But without a meal plan, they have reported numerous pain points in serving a random assortment of deli products.4

But what might happen if shoppers could rely on the deli department for help with meal planning? After all, it seems the department may be in a position to bridge the gap between the ideal of a satisfying dinner and the real experience consumers crave for their family dinner tables.

In fact, there is no grocery department better positioned to inspire and educate consumers to create easy meals they can be proud to serve. Deli should have three missions, beginning with inspiration. Starting during the late afternoon dinner-decision hour, the department should reach out to consumers with digital messages focusing on easy meal ideas featuring prepared foods. Then, when shoppers enter the store, they should discover signage and recipe cards to help educate them, directing and facilitating their journey throughout the department. They should also find well-executed products at peak quality and at peak mealtimes, along with department staff ready to help make their dinner memorable.

Another feature that sets the deli apart is that it is positioned steps from thousands of other products, where shoppers can fill their carts with items to round out those easy meals they’re going to be proud to serve to their family and friends.4

Find out more about the unique ways Tyson Deli is approaching prepared foods at tysonvelocity.com/exclusive60.