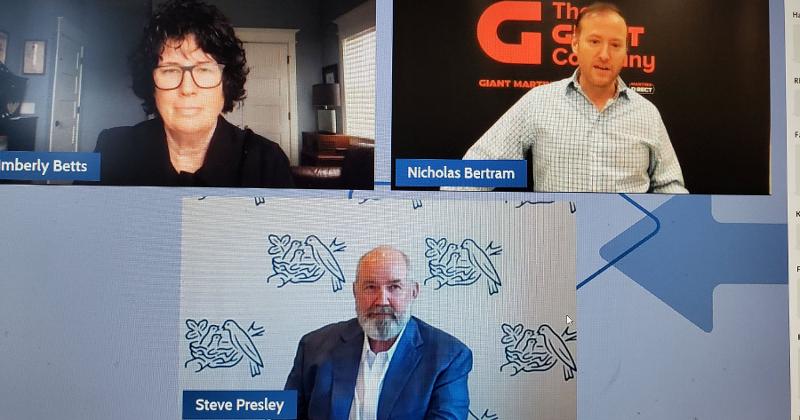 From stores racing to install plexiglass dividers to manufacturers abruptly flexing supply lines to address shopped-down inventories, the stresses that food retailers and food makers faced responding to the near-term health, safety and supply challenges of the coronavirus underscored the importance of empathetic leadership and practical collaboration that will become critical aspects of successful businesses long after the crisis has subsided.

“The first step of normalcy is when you go to the grocery store and see that there’s food on the shelf,” said Steve Presley, chairman and CEO of Nestle USA, speaking in a live-streamed panel presentation on the opening morning of this week’s annual FMI Midwinter Executive Conference. “If you want to keep the country calm and moving forward, we had to make sure the scarcity doesn’t explode, and we all played a huge part. We really rose to the occasion.”

Joining Presley in the discussion were Nick Bertram, president of Ahold Delhaize USA’s Giant Co. unit, and Kimberly Betts, managing director of human capital Deloitte Consulting. Betts kicked off the discussion sharing research indicating that 79% of workers believe organizations need to create a “a sense of belonging” for their workers: the “essential” ones reporting to stores and food facilities requiring rapid physical safety measures, and for corporate workers, learning for the first time to work from their homes.

Speaking on camera from Giant’s headquarters in Carlisle, Pa., Bertram noted an office that in normal times hosted 1,200 had “maybe 40 or 50” on-site as he spoke. But virtual meetings between home-office co-workers and supply partners—occasionally interrupted by their dogs and children—has highlighted the “humanization” of work in profound ways.

“There’s a little bit more humanity on display now. I think that’s beautiful, and I’ve actually enjoyed it,” Bertram noted. “It’s allowed me to get to know some of my teammates more than I ever would have ever expected, and they to know me better too.”

Both Bertram and Presley highlighted that equity in company culture going into the crisis—emphasis, for example, on caring (Giant) and agility (Nestle), which helped them withstand it.

“Culture drives performance,” said Presley, describing how Nestle gave its plant managers latitude to make crucial decisions to their facilities. “I make macaroni and cheese, and pizza and chocolate milk: those are things that a lot of people can make. But how do I get to scale and win in the categories we win? It’s the people … we want to keep them empowered and excited, people who are committed to this company. You do that through getting the right talent but also by having the right culture.”

Recalling the shopped-down stores that plagued the industry last March, Bertram described Giant’s workers becoming “ambassadors of hope” in communicating to shoppers that the stresses in the supply chain were temporary in nature while gently discouraging additional hoarding activity in unique ways, including a quickly developed “More for All” campaign that tied a message of responsible consumption to food instability.

“Consumer confidence was really shaken because most of our markets have never seen supply chain challenges like that,” Bertram said. “They weren’t accustomed to seeing empty shelves or not every single flavor or variety.”

Transparent and practical collaboration between supply partners helped to ease this period. “We said, ‘Let’s not get into the panic like we saw with toilet paper and cleaning supplies,’ ” Presley said. “If you really want to see some panic, get to where there’s no food on the shelves.”

A byproduct of the pressure on the industry are workers who are taking more pride in their work than they had previously.

“Supermarkets and food manufacturing has been around for centuries but there’s more pride thinking of yourselves as being on the front line in response to solve a world crisis that none of us have ever experienced,” Bertram said. “You can tap into the pride if you’re a culture-[focused] organization. Tapping into that shared value of caring was huge at that time.”

“Every single year we have some kind of curveball that comes in the way of organizations that run at scale,” added Presley. “And what this proves, is we can handle a global pandemic that nobody knew anything about and continue to move our industry forward. That’s incredible agility that gives me the confidence we can handle any curveball as an industry.”