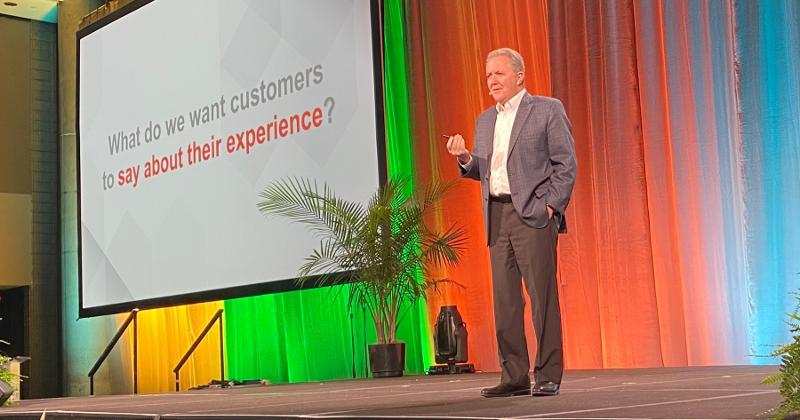 It sounds like an obvious question for a business: What do you want customers to say about their experience with your brand?

But answering that question clearly and succinctly—and making sure everyone in the organization knows the answer to it—can have profound implications for the business, author and customer service consultant Dennis Snow said in a leadership session at the IDDBA 2022 show in Atlanta on June 6.

Snow, who spent 20 years in corporate training and development at Walt Disney World, said having a clear definition of what a given brand or business aspires to be is necessary for sustained success, because people will carry at least as much responsibility as the product itself for conveying and demonstrating that vision.

At Walt Disney World, he said, "We're not just selling rides; we're not just selling attractions; [it's about] the experience we're trying to create." Disney answered the "what do we want our customers to say?" question with three ambitions: for customers to say that they had a magical experience with Walt Disney World parks and resorts, that every detail was paid attention to during their visit and that they were made to feel special.

From a product perspective, whether it's thrill rides or deli departments, people have a lot of choices, Snow said. "The differentiator is always going to be our people, and that always comes down to the leadership of the organization," he said.

Walt Disney himself would pick up trash at Disneyland, he said, and employee "cast members" today are expected to do the same. Disney staffers noted that guests will carry a piece of trash about 27 feet before tossing it on the ground, Snow said—so the trash cans at Walt Disney World are spaced 26 feet apart. The No. 1 compliment that Disney parks get is about how clean the parks are, Snow noted, and that gets to a first principle of effective leadership: Effective leaders define the culture of an organization, and they never miss an opportunity to demonstrate what they've articulated.

If senior directors wax poetic about a culture of pride and respect but the organization's interviewing process is chaotic and disorganized, or if managers don't live out the values that new hires read about in their employee handbook, then the organization is missing a golden opportunity to differentiate itself for its current and prospective workforce, Snow said.

When attention to detail is modeled for employees, an expectation for them is set, he suggested. "Culture must be defined in terms of behaviors," he said. "People know what we value by what we do."

World-class organizations have values and behaviors that are non-negotiable, Snow said, and they are deliberate about demonstrating these and reinforcing them with their workforce.

"Train and communicate relentlessly," he advised. "So many times we take the heart out of what we do as an organization." By contrast, he offered, purposeful and effective training and communication helps ensure that the employee is proud of the organization, understands what the business's true product is and knows what is expected of them. "As leaders, we can weave those three things into everything we do," he said.