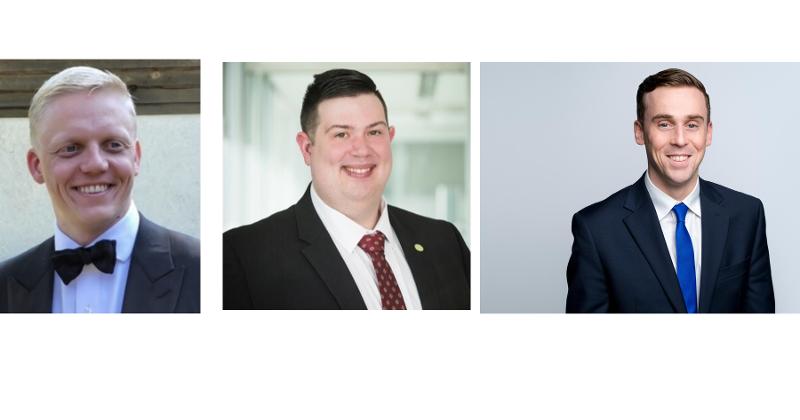 From left, Ryan Cagney and John Richard will work on policy and political affairs for the NGA and Eric Payne (right) has been promoted on communications team. / Photo courtesy: NGA

The National Grocers Association (NGA) on Monday announced the hiring of John Richard as senior manager of government relations and policy analysis, and Ryan Cagney as manager of political affairs and fundraising.

“John and Ryan bring a wealth of experience to NGA in policymaking, political affairs and grassroots campaigns,” said Chris Jones, NGA SVP of government relations and counsel, in a statement. “Their skills will be an asset to independent community grocers as they work to advance NGA’s policy initiatives on behalf of the industry.”

Richard previously served as policy analytics associate at the Aluminum Association, where he worked on policy issues including trade, recycling, workforce, energy and supply chains. He also worked at the National Restaurant Association using data analytics to drive success with state partners and as an intern for U.S. Rep. Ruben Gallego (D-AZ), NGA said.

Cagney previously served as a political consultant based in Houston, where he worked on grassroots campaigns for various issues and candidates. He also served as a government affairs advisor for the Houston Professional Fire Fighters Association and Texas Cigar Merchants Association. Cagney also worked on the campaigns of U.S. Rep. Dan Crenshaw (R-TX) and Texas Gov. Greg Abbott.

“Eric is an integral part of NGA’s communications team who continues to pursue new and better ways to enhance our member outreach and communications,” said Laura Strange, SVP of communications and external affairs.

Last week, the NGA announced its partnership with ReposiTrak, a major provider of supply chain, food safety and supplier management technology solutions, to offer the waiving of the $2,000 setup fee for food suppliers connecting to the ReposiTrak Traceability Network.

“Today’s food system has become increasingly complex with many stakeholders spanning global to regional and local levels. At the same time, there is increased public awareness of recalls and expanded government regulations, making it imperative for retailers to be even more focused on product sourcing and food safety standards from farm to fork,” said Strange, in a statement. “The ReposiTrak Traceability Network is an essential solution that will help our members and their trading partners meet the new federal regulations and take advantage of many other benefits they’ll see from knowing exactly where products are at all times.”