National Grocers Association (NGA) President and CEO Peter Larkin revealed his plans to retire next December after a 40-year career in the grocery industry.

Starting in mid-January, an NGA board-approved search committee will convene to determine a replacement for Larkin’s position, which he has held since 2010. 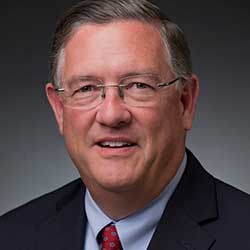 NGA officials said the association has tripled the attendance of its annual show with Larkin at the lead and has upped member engagement. Under Larkin’s leadership, NGA has also made significant government relations and advocacy efforts and launched the NGA Grocers Political Action Committee, which supports candidates who support policies important to today's mainstream grocers.

Larkin also relaunched the NGA Foundation, which has grown during his term to better support independent grocers.

Cheryl Sommer, chairman of NGA’s board of directors and owner of Kaune’s Neighborhood Market, said Larkin has “led a renaissance of NGA and will be leaving an organization that is well-prepared to support our industry for many years to come.”

“Peter’s passion and enthusiasm for NGA and the independent grocer is infectious, which is evidenced by the tremendous growth that NGA and The NGA Show has experienced under his leadership,” she said. “Independent grocers serve as the cornerstones of their communities and ensure consumers have vibrant choice in the marketplace, making it critical for independents to have a strong advocate, such as NGA, to support our segment of the supermarket industry.”

In his career, Larkin has held positions such as president and CEO of the California Grocers Association and VP of state government relations and environmental affairs for the Food Marketing Institute (FMI). He also managed government and media relations programs for The Kroger Co.

Larkin said he believes NGA “truly represents the best entrepreneurs in our industry and country” and is proud of the association's accomplishments.

“Given the rapidly changing marketplace I believe organizations like NGA are more important today than ever,” he said. “NGA is financially strong and very well-positioned to continue its mission that began in 1982 as an effective advocate and thought leader for independent grocers for decades to come.”