The U.S. online grocery market generated $8 billion in sales during September, as nearly one out of every two U.S. households bought groceries online during the month, according to survey results released Wednesday by Brick Meets Click and Mercatus.

The data showed continued strength in the pickup and delivery segment offset by a reduction in orders shipped to home directly. The former segment generated $6.7 billion in volume and the latter $1.4 billion.

While year-over-year comparisons were not available, datya from August of 2020 showed that ship-to-home’s share of sales shrank by 10 percentage points while pickup captured all that and more, given the share that delivery also ceded during that period.

“The combined pickup and delivery segment now captures nearly 80% of sales in the U.S. e-grocery market, and pickup hit a record-high portion of total sales in our September research wave, underscoring its critical role in a grocer’s strategy,” David Bishop, partner at Brick Meets Click said. 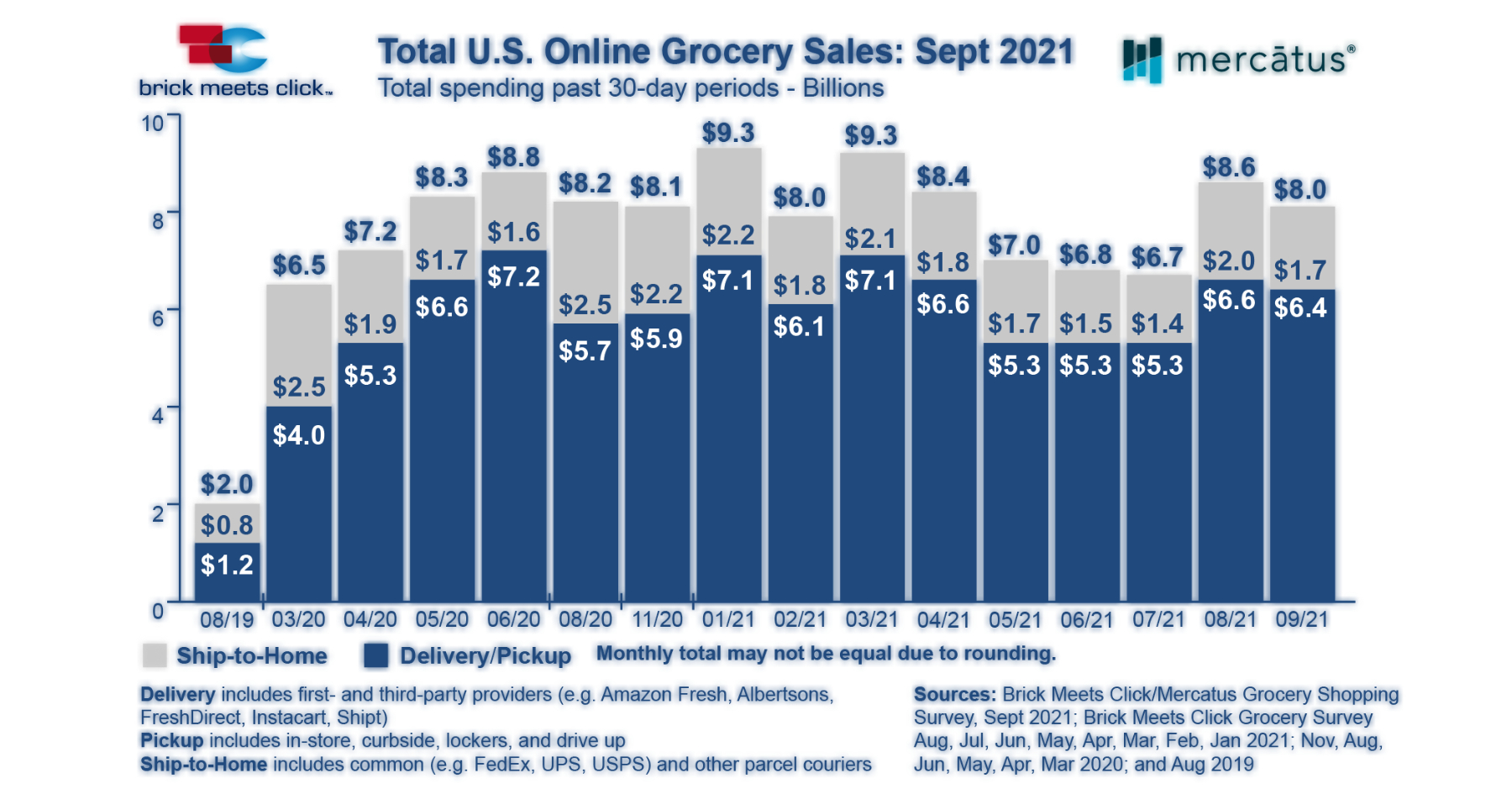 During September, 64.1 million, essentially one out of two U.S. households, bought groceries online, a 16% increase versus August 2020. For the same period, pickup/delivery’s combined monthly active user (MUA) base grew more than 33% while the ship-to-home user base contracted by over 12%.

Since January 2021, the average number of orders placed by online shoppers has consistently ranged between 2.66 and 2.83, and September continued this trend with MAUs placing an average of 2.76 orders. In contrast, the average number of online orders recorded pre-pandemic, in August of 2019,was significantly lower at just 2.03.

Pickup/delivery has grown from growing from 56% in August 2020 to 67% in September 2021. “Both the lift in order frequency and the shift to delivery/pickup as a receiving method illustrate how the pandemic has changed the way a sizable number of consumers shop for groceries,” said Bishop.

The share of Grocery’s MAU who also placed at least one online order with Mass during September 2021 increased nearly eight points to 25.7% versus August 2020. The degree of cross-shoppinghas consistently totaled between 24.3% and 28.7% every month since January 2021 and shows how a mass rival could now be a grocery retailer’s primary competitor when it comes to online grocery.

The likelihood that an MAU will order again from the same online grocery service in the next month landed at 61.4% for September 2021, up one and a half points from prior month. Compared to August 2020, however, this repeat intent rate is down more than 13 points, likely due to the high degree of concern about COVID that was compelling consumers to use these online services at that time.

When comparing repeat intent rates across retail formats, grocery’s repeat intent rates lagged those of mass retailers like Walmart and Target by 3.5 percentage points, or almost 6%. This gap signals that grocery retailers may have an opportunity to boost satisfaction by addressing and overcoming friction points associated with their shopping experience.

“Conventional grocers need to take a closer look at their local market dynamics to understand how well they are performing online,” Sylvain Perrier, Mercatus president and CEO, said. “The mass merchandisers continue to set the pace and define the standard for digital grocery against which other retailers’ services are increasingly evaluated.  Now more than ever, it’s essential for grocery retailers to align their operational processes with a best-in-class customer experience to retain a competitive edge.”