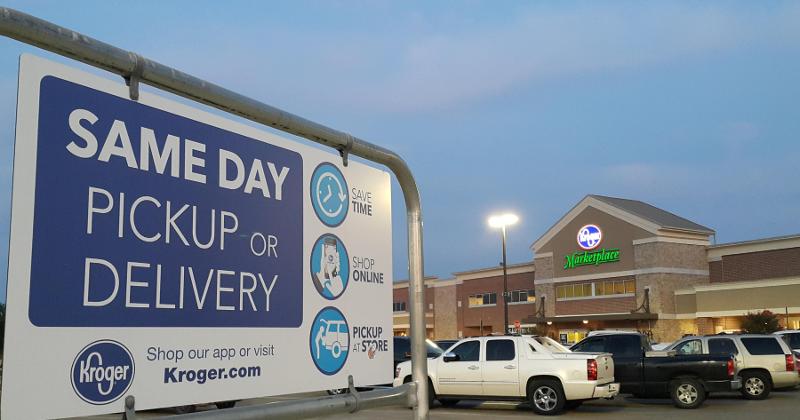 After rocketing growth throughout the course of a COVID-influenced 2020, total spending on online groceries has dipped for a fourth consecutive month even as the number of online shoppers grew, a new consumer survey shows.

The Brick Meets Click/Mercatus monthly survey, conducted July 29-30, indicated U.S. shoppers spent $6.7 billion on groceries online in July, about $100 million, or 2%, less than they spent in the same channel in June. The survey has shown sequential monthly declines since online spending matched a peak of $9.3 billion in March.

Researchers however characterized the trend was stabilizing amid expected choppy peformance, as some consumers returned to stores amid increased vaccinations and others evolved the way the choose to shop online. Much of the decline in the July figures relate to an 8% decline in spending in the ship-to-home channel (which totaled $1.4 billion) despite that channel gaining share in trip volume: In the same period, pickup volume remained steady at $5.3 billion for a third straight month and online shopping for local delivery slipped slightly, to $1.4 billion.

David Bishop, a partner at Barrington, Ill.-based Brick Meets Click, in an interview with WGB noted that the stabilizing performance in recent months provided further indication that virtual channels were maintaining the massive share gains of a year ago while shoppers are adjusting to reopening markets—and in some cases, surges in the Delta variant—influencing their preferred methods of shopping.

Sales levels for pickup/delivery and ship-to-home are respectively 4.5 and 1.8 times greater than pre-COVID sales, which the firms measured for the first time in August of 2019. 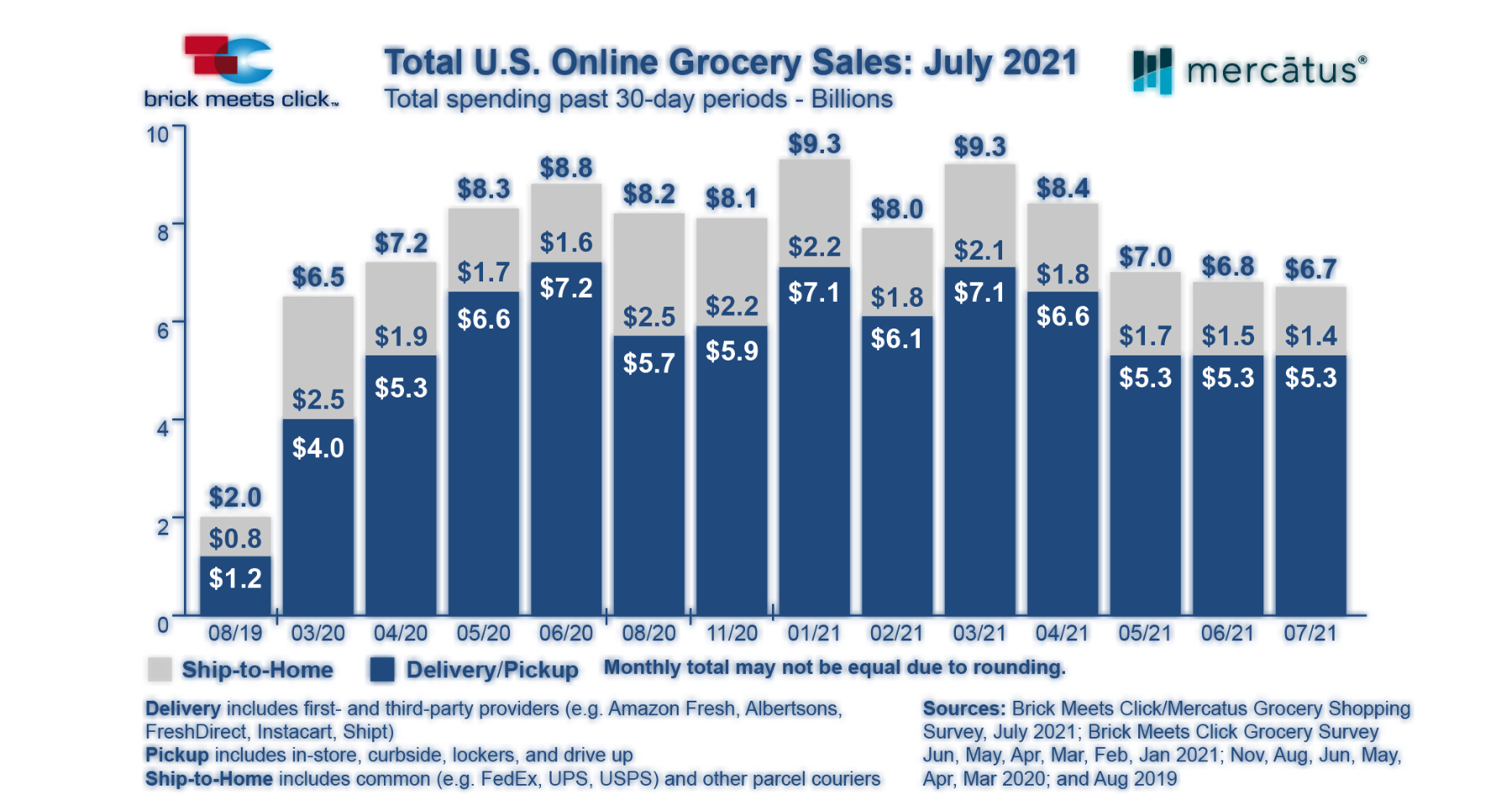 “The majority of shoppers still prefer to shop inside the store—that’s not an indictment of online—it just is what it is,” Bishop said. “And it reflects that online shopping plays a role, albeit a larger role today than it did before COVID, and so it’s not surprising to see a return to some degree of normalcy. although from a higher starting point than we were before.”

Baskets and Frequency Down, Customers Up

The ongoing independent research initiative, created and conducted by Brick Meets Click and sponsored by Mercatus, showed that July’s overall sales decline was caused by a decrease in spending per order and a slight drop in monthly order frequency, which were partially offset by an increase in the number of monthly active users.

The weighted average spending per order across all three receiving methods shrank more than 5% in July 2021 versus a month ago due to two factors, researchers said. First, the ship-to-home average order value was nearly 19% lower versus June 2021, while the pickup/delivery value essentially held steady. Ship-to-home—or grocery orders from traditional e-commerce players like Amazon or third-party fulfilled orders from Instacart—also captured a larger share of orders on a month-over-month basis, which contributed further downward pressure on the top-line. That’s because ship-to-home’s spending-per-order is typically about half that of pickup and delivery orders.

Order frequency dipped slightly, just under 1%, to 2.68 orders per monthly active user during July as compared to 2.7 during the prior month. Ship-to-home grew its share of monthly online grocery orders by nearly three percentage points in July to 34%. Although this resulted in a share loss for the pickup and delivery segment overall, delivery performed well, while pickup lost five share points on a month-over-month basis. Notably, more than four in 10 monthly active users have placed three or more orders per month since January 2021, stabilizing after COVID peak levels in 2020.

The total number of U.S. households that bought groceries online in July, using any of the three receiving methods, jumped nearly 5% to 66.5 million households compared to June. This gain reflects increases across all age groups with the youngest (18-29 years old) climbing the fastest by more than 7%. Somewhat surprisingly, the share of the users who received an order via pickup dropped three percentage points on a month-over-month basis, while delivery and ship-to-home grew by six points and four points respectively.

Bishop ascribed this change to ongoing consumer uncertainty amid Delta variant surges and the perception that home delivery introduces relatively less risk of virus transmission than order pickup because of social distancing.

July’s repeat intent rate, which measures the likelihood that a shopper will order again in the next month with the same grocery service, dropped to 56%, down four points compared to a month ago.

“There is a leaky bucket syndrome occurring where the amount of new customers we're putting in the top of the bucket are being dissipated almost in equal amount by those who are leaving,” Bishop explained. “But that issue is less about how acceptable or how seamless the shopping experience is, as opposed to how acceptable it is for that customer. In this case, the acceptability is determined in large part by preference, so if a person was using online shopping as a way to mitigate concern [over the virus], then the level of acceptability for that period of time is going to be higher. But as soon as they're vaccinated, as soon as new cases get under control and people feel more comfortable, they’re going back to stores and we’ll we see that number come down.”

The share of online customers who used both a grocery service and a mass/discount service to buy groceries during July 2021 contracted to 25%, down about three percentage points versus the prior month. This downtick was attributed to fewer grocery customers shopping with mass/discount retailers other than Target or Walmart, as cross-shopping with both these two retailers increased between the June and July months.

“Grocers should be thinking about near-term improvements that will set them up for ongoing success as the monthly results reinforce that the online customer wants flexibility and convenience,” Sylvain Perrier, president and CEO, Mercatus, a sponsor of the monthly survey. “Progressive retailers are reducing operational sources of friction, like the frustration and uncertainty associated with wait times. At the same time, grocers need to better understand their core customer so they can build more meaningful engagement that leads to increased share of wallet.”

The study surveyed 1,892 adults, 18 years and older, who participated in the household’s grocery shopping.