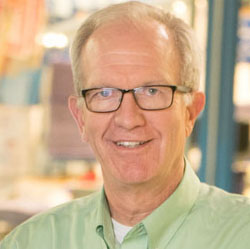 Pepperl joined Stemilt in 2000. As marketing director he built the Wenatchee, Wash.-based company’s marketing department from one designer to the seven-member team it is today. Some of his successes include the development of the Lil Snappers kid-size fruit brand and A Half Mile Closer to the Moon cherries.

“Roger never ceases to amaze me with his innovative mind, and ability to create brands and programs that benefit the grower, the retailer and the consumer,” said Stemilt President West Mathison in a release. “My family and I cannot thank him enough for the work he’s done to transform our company into a recognized brand. His retirement is well-deserved, and I can’t wait to hear about his journey in this next chapter.”

Pepperl joined Stemilt after a 21-year tenure in produce at Meijer in Michigan. He bought cherries from Stemilt and worked alongside founder Tom Mathison to become the first retailer to merchandise cherries in catch-weight bags.

“Roger was alike my grandfather, Tom, in so many ways,” said West Mathison. “He wasn’t afraid to try something new at retail, as long as it meant selling more and never sacrificing quality. His gift to see things that others cannot see has been inspiring.”

Pepperl has also volunteered on several committees and boards, including for United Fresh, the Produce Marketing Association and the Produce for Better Health Foundation. His accolades include The Packer’s Marketer of the Year in 2015, the first recipient of United Fresh’s FreshMKT Achievement Award in 2017, and one of 35 produce Vanguard’s in 2020 by Produce Business.

In his retirement, Pepperl is looking forward to spending more time with his family, including his new granddaughter. He will also continue his passions of traveling, hiking, gardening and rooting on the Michigan State Spartans.