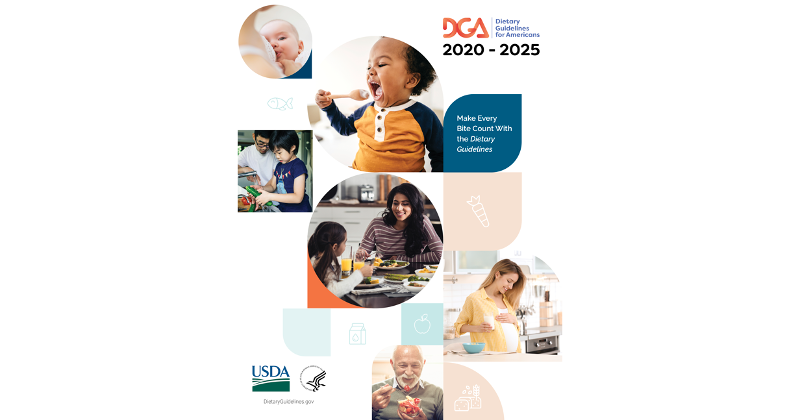 Photograph courtesy of USDA and HHS

The federal government's new edition of the Dietary Guidelines for Americans repeats much of what consumers have heard for years when it comes to healthy eating: choose nutrient-dense foods, with an emphasis on whole fruits and vegetables; choose whole grains and low-fat or nonfat dairy options; eat a variety of proteins; and limit consumption of alcohol and of foods and beverages high in added sugars, saturated fat or sodium.

As such, this new edition, which largely stays the course in terms of guidelines for adults and urges consumers to "Make Every Bite Count," is drawing industry praise.

"With growing consumer interest in the connection between food and health, there is opportunity to help shoppers make small changes to embrace these science-based recommendations while shopping, cooking and eating," FMI–The Food Industry Association's Krystal Register said in a statement. Register, FMI's director of health and well-being, added: "We also commend the agency’s effort to incorporate food-safety messaging in the guidelines." The 2020-2025 edition of the Dietary Guidelines for Americans makes special note of heeding food-safety best practices for older adults, whose weaker immune systems can make them more vulnerable to foodborne illnesses.

Tom Stenzel, president and CEO of United Fresh Produce Association, commented that the link between diet and disease has been put in new perspective in the past year. "We know that diet-related conditions such as obesity and diabetes put people at greater risk of severe illness and even death," he stated in response to the new guidelines' release. "No longer are we just thinking about poor diets leading to long-term chronic disease; now, we see clearly that healthy eating is a critical defense against communicable diseases such as the coronavirus.

"Now is the time for the political will to actually implement this critical public health advice throughout all federal food programs."

The new edition's executive summary states that more than half of U.S. adults have one or more diet-related chronic diseases. The Dietary Guidelines for Americans, updated every five years, helps inform federal policy decisions and education initiatives with respect to federal nutrition programs, including the National School Lunch Program.

New Guidance for Toddlers, No Moves on Sugars

Two noteworthy decisions by the U.S. Department of Agriculture (USDA) and the U.S. Department of Health and Human Services (HHS), the agencies tasked with jointly updating the guidelines every five years, are drawing further comment. First, the new edition for the first time since 1985 includes dietary guidance for infants and toddlers, including the recommendation that added sugars be avoided entirely for children younger than 2. Second, the 2020-2025 edition does not change existing recommended limits on added sugars and alcohol for adults.

Commenting in a news release about the decision, the USDA and HHS stated the new edition of the guidelines "carried forward the committee’s emphasis on limiting these dietary components but did not include changes to quantitative recommendations, as there was not a preponderance of evidence in the material the committee reviewed to support specific changes."

The not-for-profit Center for Science in the Public Interest (CSPI) called the decision not to change the added sugars recommendation for adults "disappointing" and contrary to current available evidence. "There is no question that individuals would benefit from reducing their intake of added sugars to less than 10% of calories, but they would benefit more by consuming less than 6%," CSPI policy associate Jessi Silverman wrote in a statement

Mitchell Elkind, president of the American Heart Association, echoed the comment. "We are disappointed that USDA and HHS did not accept all of the Dietary Guidelines Advisory Committee’s science-based recommendations in the final guidelines for 2020, including the recommendation to lower added sugars consumption to less than 6% of calories," Elkind wrote. He urged consumers, policymakers and those in industry to view the guidelines as a first step rather than a final word. "We need policy and environmental changes to ensure consumers can easily access healthier food," he wrote. "This requires collaboration among the food industry, government agencies, health organizations and consumers nationwide."