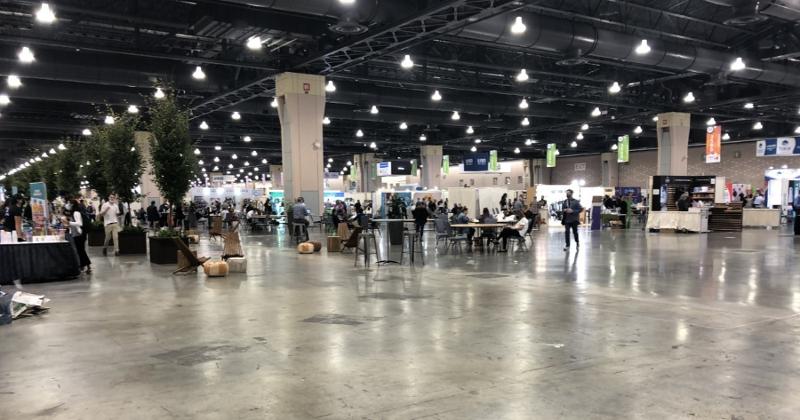 For many, it was the first in-person trade show they had attended since the start of the pandemic. While Natural Products Expo East, held at the Pennsylvania Convention Center in Philadelphia, Sept. 22-25, featured a less robust exhibit hall and fewer attendees than pre-COVID Expos, the general consensus among the exhibitors WGB spoke with was that the event exceeded expectations and networking on the show floor was, for the most part, a quality-over-quantity experience.

While rumors circulated that some 600 retail buyers had decided not to attend the show shortly before opening day, exhibitors said they’d met with buyers from Wegmans, Wakefern, Costco, Big Y, CVS and Wawa, among others.

“There are also small to mid-market buyers here and I now feel seen,” said first-time Expo exhibitor Old Quebec Cheddar’s Aaron Deppen, who added that trade shows prior to the pandemic were historically so hectic and crowded that connecting with buyers was a challenge. The cheese company was prompted to exhibit at Expo East after the Summer Fancy Food Show was cancelled. “Our strength has always been small, specialty food stores,” added Deppen.

A representative at the Caulipower booth said that while there were fewer buyers and attendees at this year’s Expo East, conversations with retail buyers were “more meaningful and impactful.”

It was a sentiment echoed by many at Expo East despite a show floor with noticeably fewer exhibitors and attendees. And while keynote sessions during Expo East were socially distanced and far from packed, Friday’s keynote speaker Shawn Achor indicated that as many as 25,000 additional people may have attended the session virtually. Expo organizers, New Hope Network, allowed those registered for the event to attend virtually as well as in person.

But while this year’s Expo East was a quieter affair, these four top trends were as loud as ever.

From established brands such as La Croix and Topo Chico to up-and-comers including Shine Water, a vitamin D-enhanced hydration product; Roar Organic waters with electrolytes, vitamins and antioxidants; and True North energy seltzers, hydration was around ever corner at Expo East.

The craze continues. Plant-based products rocked this year’s Expo East with exhibitors such as Violife, which showcased its plant-based cheeses; Teva Deli, which featured its vegan barbecue items; Veggies Made Great, which recently launched a vegan muffin line that is allergy-friendly and egg free; UNCUT plant-based burgers in chicken, breakfast sausage and turkey alternatives; and Rebellyous Foods with its No Harm, No Fowl plant-based chicken nuggets.

Snacks Made from Everything

The natural snack category has exploded with suppliers looking to make everything from chips to puffs from a variety of nutritious ingredients. Hippeas (puffs made from chickpeas), Kibo Chickpea Chips, Yolele Fonio Chips (newly launched chips made from fonio, an ancient African grain), Under cover Chocolate Quinoa Crisps, and Turbana Casava and Plantain Chips were all on display.

WGB’s conversations with exhibitors of CBD products indicate that CBD is coming to grocery in a bigger way in the next year, with top trends in the category including products aimed at helping with de-stressing and sleep. Wyld CBD showcased its CBD sparkling water and gummies. Martha Stewart’s line of CBD products designed to de-stress and help with sleep were on display, as were Melatonin Gummies from CBDfx for sleep. Lazarus Naturals presented CBD products for pets and humans.

“The key in grocery is that so few are doing the category justice,” said Josh Crosier, national sales manager for Caliper Consumer Goods, makers of dissolvable, fast-acting CBD supplements, when asked about grocery’s opportunity in CBD.