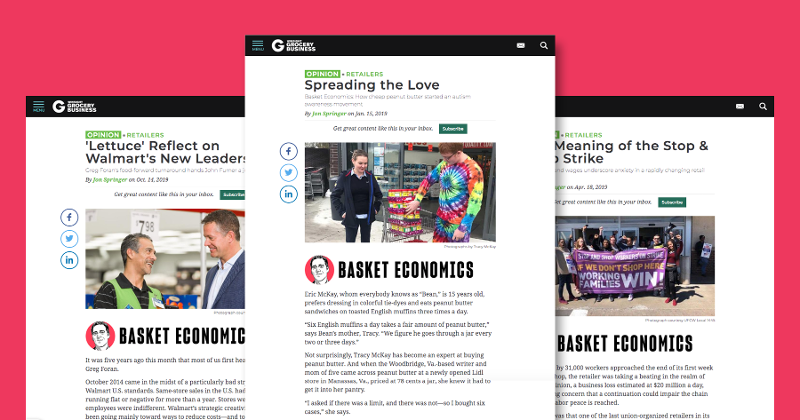 Winsight Grocery Business is proud to announce its win in the Best Commentary/Blog category at the 66th Jesse H. Neal Awards, honoring the nation's best business-to-business journalism. WGB was also named as a finalist in the categories Best Industry Coverage and Best Art Direction for a Single Article.

"We are honored to win the Neal award this year for Best Commentary. It is a testament to the hard work of the editorial staff who, throughout 2019, provided industry standards for content and analysis, and who continue to do so today in the rapidly changing food retail environment,” said Meg Major, WGB's VP of content.

The columns looked into the underlying cultural anxieties that played out in a costly strike by 31,000 workers at Stop & Shop; reflected on the legacy of outgoing Walmart U.S. CEO Greg Foran; and told the story of how discounter Lidl got a heartwarming boost after an autistic teen who liked its peanut butter took to social media to ask when it was next going on sale.

The Jesse H. Neal Awards were created by Connectiv in 1955 and are the most prestigious editorial honors in the field of specialized journalism. Named after Jesse H. Neal, the first managing director of Connectiv, the Neal Awards recognize and reward editorial excellence in business-to-business media. Winners were revealed in an online ceremony held April 17.