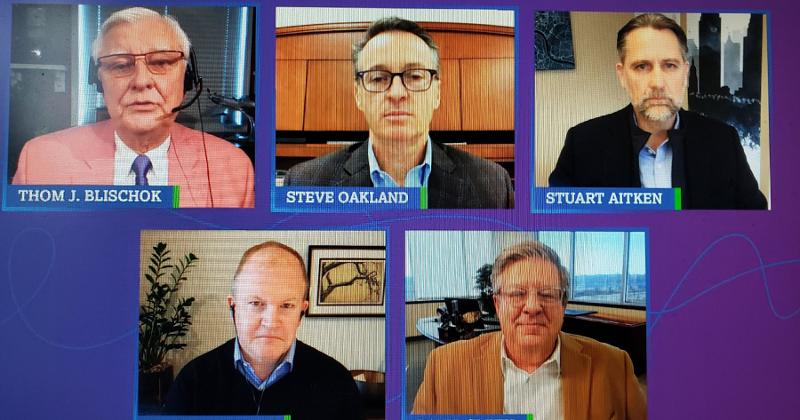 The supply chain strains that came along with the pandemic taught the retail food and consumer goods industries a punishing lesson on what was important, and it has fueled a new urgency around collaboration and innovation that can better withstand crisis.

At the same time, these companies took a measure of pride in their rapid response to keep stores running and shoppers and workers safe—if not entirely satisfied—amid a volatile and dangerous environment none of them were fully prepared to deal with.

That was the message from a panel discussion among top U.S. retailers and suppliers streamed this week as part of FMI’s annual Midwinter Executive Conference.

“By any measure, we’ve learned about ourselves and that we can do so much more, and so much more quickly, when we have a clear idea of what success is,” said Eric Reynolds, COO of The Clorox Co. “We have moved at a speed and flexibility I don’t think I’ve ever seen in my career, all because we got very clear on what mattered and a lot of the other noise went away.”

Reynolds confessed that Clorox fell well short of demand for some of its products when consumers cleared out shelves amid the initial onset of the COVID-19 virus 10 months ago. It is still at work on recovering.

“We were built for 1% to 2% growth—2% growth in some of our categories is an outstanding year,” he said. “We were not built for this level of volatility, and we’ve seen the fractures in our systems and our technologies and that’s disappointing, not just to consumers but to retailers who are counting on us and our brands in their stores. There’s been a ton of incredible pride, but also a big dose of reality and humility that we have so much more work to do to make sure we are never disappointing shoppers.”

Other panelists—David Smith, CEO of the cooperative retail wholesaler Associated Wholesale Grocers (AWG); Stuart Aitken, The Kroger Co.’s chief merchant and merchandising officer; and Steve Oakland, president and CEO of private-label products manufacturer Treehouse Foods, told similar stories of areas in which their company’s shortcomings were exposed by the virus, and agreed that solutions lie in a simpler, more transparent supply chain enabled by coloration between them. This new chain may well include larger stockpiles of fewer items, reflecting a deeper consumer connectivity than the diverse and slow-growing assortment universe they brought into the pandemic.

Aitken of Kroger for example, noted that photos of empty shelves in stores told one powerful story of the pandemic. The photos of items that hadn’t been cleared out told quite another.

“We learned that whenever customers could get products, they sought them out, whether it was a Walgreens or Kroger or the corner store,” Aitken said. “What we also learned is, we didn’t have the modalities those customers were looking for. Specifically, they didn’t want to go into stores early on because of the fear factor, [so] we had to reimagine every aspect of our supply chain and how we got product to our customers.”

Smith noted that same-store sales at AWG member-owned stores were up 22% between March 11 and Dec. 31 of last year.

“We consider that a blessing,” he said. “But what we found was that the number of items being sold declined by 18.5%. Consumers were much more precise on what they were buying, and it causes us to think about the retail selling space in our store, and being merchants. And also, our real estate digitally—what we are promoting and putting in front of the customer.”

At Treehouse, Oakland found a business well-versed in complexity was underprepared for volatility, and the company is examining investments in technology to better handle that. The fact that private label lost overall share amid the rapid growth, he added, sent a message that supply chain reinvention should accompany a reexamination of what all parties can do to reduce costs and move away from what he called “lowest-common denominator” conversations about private label goods.

“We probably haven’t invested enough time in the strategic, in what’s possible; and we’ve lost that total cost-to-serve model,” Oakland said. “We work really hard to drive a penny out of a cost structure rather than take a dollar out of the whole supply chain. And so I think we need to better understand one another and make relationships where we really are strategic for one another.”

Much of this work is still ahead for trading partners, the panelists agreed.

“In the middle of a firestorm is a terrible time to totally reimagine your supply chain,” Reynolds said. “So what we were trying to do is get as simple as we possibly can and get very clear on the assortments we should have … and plan for a world of elevated demand.”

This will require that partners work together closely, he added, so that “when this gets back to a new normal, how do we not go back to that level of complexity? How do we make sure that every item earns its place in the basket of someone?

“It’s something we’ve learned we can't do alone. ... We have to collaborate more, share more data, make our supply chains transparent to each other so we can make sure that all the way from the demand signal to fulfillment we're working together to make sure we never disappoint someone.”

Aitken of Kroger said its investments and innovation energies would similarly zero in on aspects of the business that can address consumer pain points around friction exacerbated by the supply chain disruption.

“The American psyche has really changed around hygiene, cleaning and health and if we’re going to innovate. Let’s innovate where it matters,” he said. “Let’s focus our attention in those spaces, propagate innovation there, and streamline where it’s not as important.”