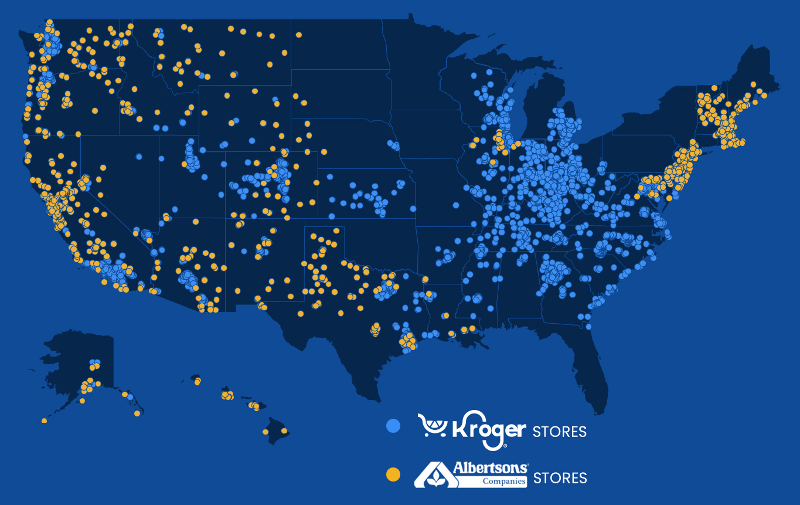 A merged Kroger and Albertsons would have a store footprint that covers much of the country. / Photo courtesy: Kroger

It’s hard to overstate the significance of Kroger’s pending $24.6 billion purchase of Albertsons, which was announced early Friday. There’s no question the merger will have wide-ranging impacts on the grocery industry and its shoppers.

The deal, if it wins federal regulatory approval, will create a mega-grocer with nearly 5,000 stores and more than 700,000 employees. Its supermarkets will reach more than 85 million households around the country.

Here’s what we know so far, what’s still uncertain and what to pay attention to for the future.

A combined Kroger-Albertsons would create a grocery force that could potentially compete with Walmart’s dominance in the market. Last year, the two grocers had combined annual revenue of $209 billion—about $8 billion short of Walmart—but it would certainly get them within spitting distance. Currently, Cincinnati-based Kroger is the country’s second-largest grocer by market share. Boise-based Albertsons ranks fourth.

2. The merger could encounter some regulatory issues

Kroger and Albertsons need Federal Trade Commission clearance to complete the deal. To avoid potential anti-trust issues, the companies said they would sell off between 100 and 375 stores in parts of the country with overlapping operations to create a stand-alone subsidiary called SpinCo. Kroger execs, perhaps unsurprisingly, are optimistic the deal will go through. “We are confident from extensive work that we’ve done that we believe we have a clear path to achieve regulatory approval with divestitures,” Kroger CFO Gary Millerchip said during a call with investors Friday morning. “We really see SpinCo as one option to be able to address those divestitures. We think it’s a really clean option in the sense that it could potentially be a faster way to package up the strategy around divestitures.”

3. It will give some fortunate tech companies a big chance to scale up

The tech repercussions of this proposed merger are not yet fully known. But they’ll likely be significant. The stock price of Ocado is up more than 6% in the last several days. Ocado is the U.K.-based grocery e-commerce firm that Kroger partnered with in 2018 to create its delivery network. Ocado’s technology is used in Kroger’s fulfillment centers, an army of bots that are used retrieve items for digital orders.  Kroger said the merger will combine and expand the tech infrastructure currently employed at both retailers.

Combined, Kroger and Albertsons sell some 34,000 private-label items across a wide variety of product categories—a number that will likely grow as retailers expand their manufacturing footprint, the companies said. “We will be able to significantly expand Our Brands’ assortment to offer customers even more innovation and variety,” Kroger CEO Rodney McMullen, who will helm the combined company, told investors Friday. “On a combined basis in 2021, Kroger and Albertson’s portfolio had sales of $43 billion. This would make us equivalent to one of the largest CPG companies in America … Together, these capabilities will allow our combined companies to drive improved quality, efficiency and value to provide unique products to our customers.”

By combining the loyalty programs and data science know-how of both retailers, a combined Kroger-Albertsons will be sitting on a veritable mountain of customer data. Together, they’ll amass a database of about 85 million households, what Kroger calls “one of the most comprehensive first-party data repositories in the food and retail space.” Kroger said this will allow the grocers to do more personalized marketing. The massive amount of customer data will also accelerate the growth of Kroger’s media platform as well as its 84.51 data analytics arm.

6. But what about grocery prices?

Kroger said it would use about $500 million in savings realized by combining the two retailers to invest in lowering prices, particularly at Albertsons banners. How that will actually play out remains to be seen. Upon reports of the merger, consumers around the country took to social media to voice concerns about the potential for higher prices when one grocer rules so much of the market. McMullen, though, said he will work to invest in pricing to “help make the world a little bit easier for customers.”

7. Kroger could get a nice boost out of the deal

Foot traffic at Albertsons stores were up 2.9% during the first week of October, compared to the same week in 2019, according to data firm Placer.ai. Meanwhile, foot traffic dropped 6.7% at Kroger stores during the same period, the firm found. Plus, an Albertsons acquisition will expand Kroger’s manufacturing footprint as well as boosting its omnichannel operations.