The second request to Kroger extends the initial 30-day waiting period for an antitrust review of the $24.6 billion Kroger-Albertsons merger. / Photo: Shutterstock

The Kroger Co. has received a second request for information from the Federal Trade Commission on its $24.6 billion deal to acquire Albertsons Cos., potentially dragging out the mega-merger's approval process.

Kroger said Tuesday that the second request extends the initial 30-day waiting period for an antitrust review following the filing of a merger transaction with the FTC and Department of Justice antitrust division under the Hart-Scott-Rodino Antitrust Improvements Act (HSR). The request for more information on the proposed Kroger-Albertsons merger, unveiled by the two grocers on Oct. 14, signals that the FTC holds significant antitrust concerns and seeks a much deeper investigation, which could extend the review by months and the time to finalize the transaction by a year.

Kroger and Albertsons have said they expect to close the deal in early 2024, pending federal and state regulatory approval and other customary closing conditions. However, Wall Street analysts and other industry observers say regulatory clearance is likely to take longer for such a large transaction—the biggest U.S. supermarket merger ever—and could last up to two years.

“Kroger looks forward to realizing the compelling benefits this merger will offer, including enhancing competition, lowering prices for customers, improving access to fresh food, creating opportunities to continue investing in our associates and securing the long-term future of union jobs,” Cincinnati-based Kroger said in a statement on Tuesday. “We will continue to work cooperatively with the Federal Trade Commission as it conducts its review of the merger, including developing a thoughtful divestiture plan. Kroger continues to expect to complete the merger in early 2024.” 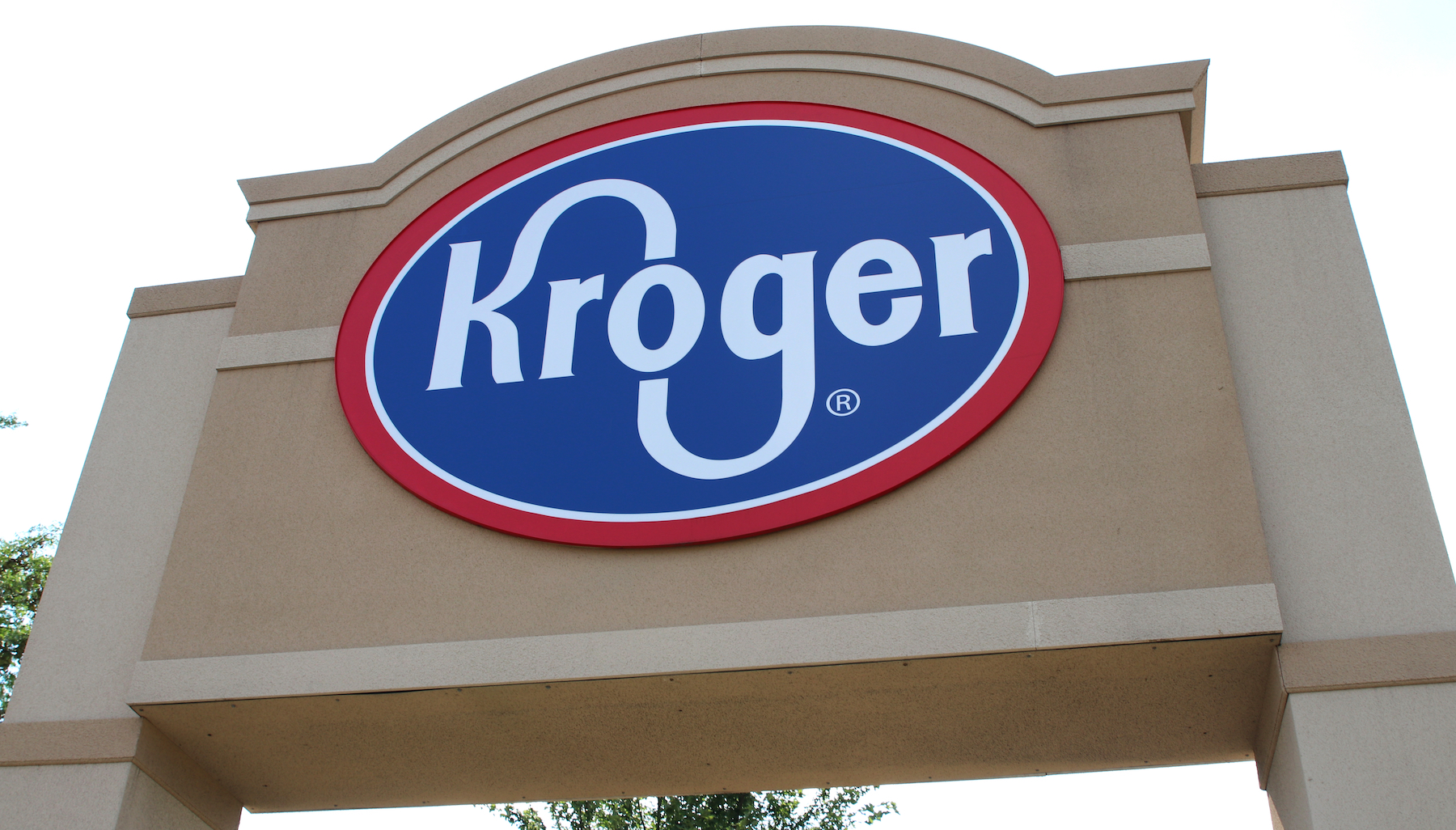 Kroger and Albertsons expect to finalize the merger transaction in early 2024, but Wall Street analysts and other industry observers say regulatory clearance is likely to take much longer. / Photo: Shutterstock

The FTC’s second request comes a week after Kroger Chairman and CEO Rodney McMullen and Albertsons Cos. CEO Vivek Sankaran were grilled by lawmakers in a Senate Judiciary subcommittee hearing on the planned merger. Senators largely focused their questions on the deal’s potential impact on shoppers, labor, food access and grocery retail competition, while the two CEOs explained the merger’s expected benefits and laid out their plans to allay competitive concerns via store divestitures and investments in lower prices, shopping enhancements, and wages and benefits.

“We operate on razor-thin margins. This merger will give us the flexibility, national footprint and digital capabilities to compete more effectively,” McMullen told senators at the Nov. 29 hearing. “Our business model is built around lowering prices to attract more customers, rather than making higher margins on fewer customers. Our fundamental strategy is to lower prices, invest in associates and the customer experience, and support our local communities. We’ve been doing this for years, and when we do these things well, our shareholders benefit.”

Like McMullen, Sankaran sketched out a changed grocery retail playing field in which consumers are buying food, meals and groceries from stores of all stripes and sizes, and even large companies like Kroger and Albertsons are getting squeezed by stiff competition.

“The marketplace for groceries over the past decade has completely transformed, making the competition for consumers fierce,” Sankaran said at the Senate hearing. “The best way to compete with megastores like Walmart and highly capitalized online companies like Amazon will be through a merger with Kroger. And even after this merger, Walmart, Costco and Amazon will have nearly three times the share of grocery sales as Kroger and Albertsons combined.” 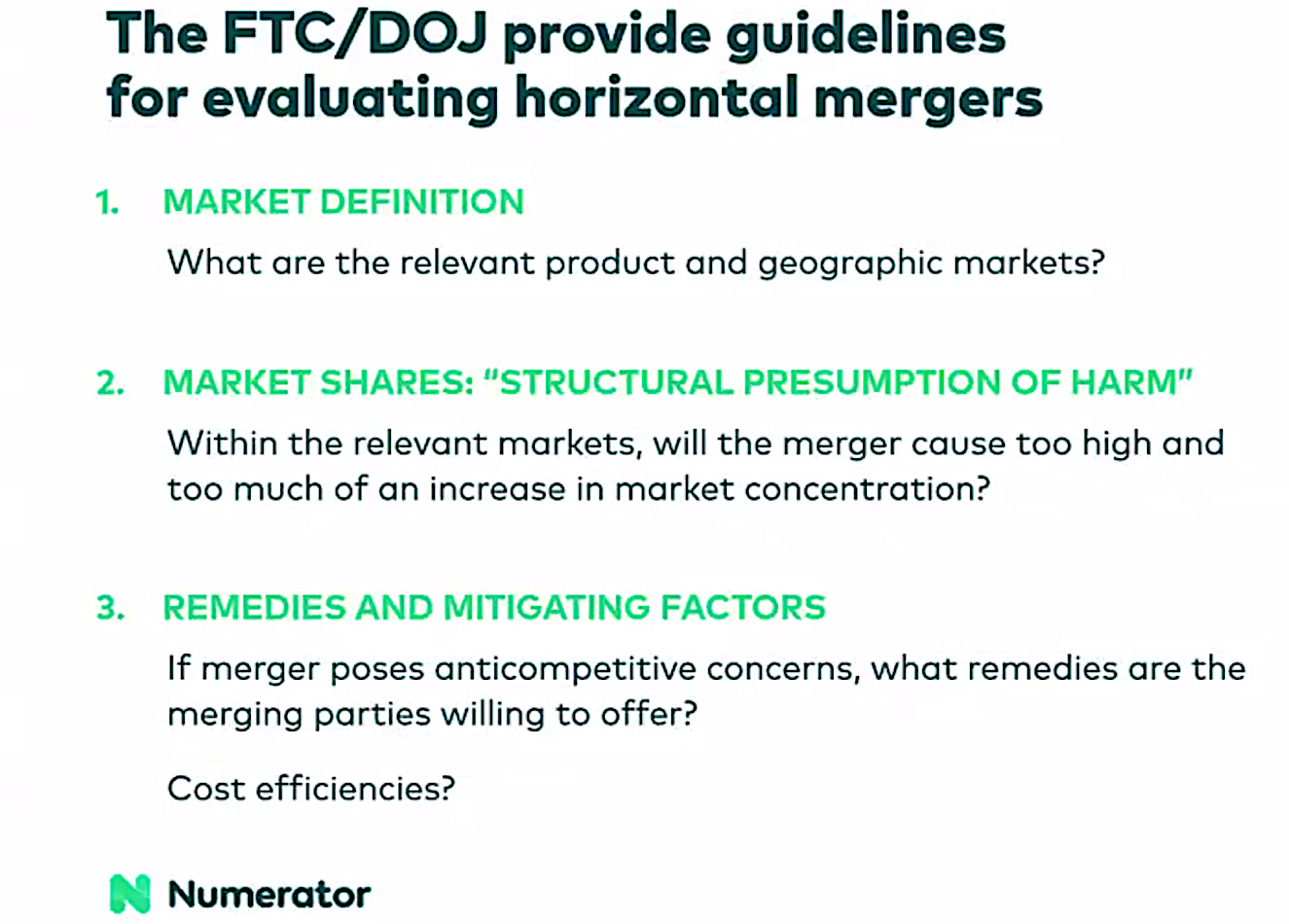 In a recent webinar on the Kroger-Albertsons merger with J.P. Morgan, consumer market data specialist Numerator explained what regulators will be looking at. / Image courtesy: Numerator

Much of the FTC’s evaluation rides on how broadly or narrowly regulators define the grocery retail marketplace.

Leo Feler, chief economist for consumer market data specialist Numerator, explained to J.P. Morgan analyst Ken Goldman in a Nov. 22 webinar that the market, for example, could be defined by certain product segments in the food/supermarket channel (meat and dairy only, groceries only or total basket) or by the total basket for supermarkets plus mass retailers; for supermarket, mass, drug and dollar retailers; for fast-moving consumer goods (FMCG) overall; or for FMCG, e-commerce, delivery and restaurants. Regulators also may gauge the power a merged Kroger-Albertsons would gain in terms of leverage with suppliers and how that might impact the grocery market and the supply chain, Feler added.

“This is the kind of analysis we’ve done in addition to what we had before, which is we have this pretty bullish view that the merger is going to generate consumer benefits given the greater scale, sourcing efficiencies and supply chain efficiencies,” Feler said. “But there are particular areas that are likely to be harmed by the merger. And in those areas, you can use very granular data to figure out how consumers substitute and where consumers would shop instead, and therefore who might be potential buyers for divested stores to alleviate any market concentration concerns.”

Kroger and Albertsons have said they expect to divest 100 to 350 stores to buyers and/or into a stand-alone spinoff company dubbed SpinCo. Analysts have noted the merger deal includes a 650-store divestiture ceiling, at which point the two grocers could elect to reassess the agreement.

In Kroger’s fiscal 2022 third-quarter conference call last Thursday, McMullen mentioned the Senate hearing and said he had no significant updates on the merger with Albertsons.

“I shared with the senators that our merger will lower prices for customers starting day one, continue investments in our associates and stores and customer experience, and do even more in our communities than either company can do alone. We believe this merger will allow us to fulfill these commitments to our customers, our associates and our communities well into the future,” he told analysts on the call.

Going forward, Kroger will provide merger updates when there are material developments to report, McMullen added.

“We are making early progress on our integration planning as expected, and we continue to engage with all of our stakeholders and regulators,” he said. “We are advancing our road map to close the transaction in early 2024. We look forward to working with the regulators as they review the transaction.”