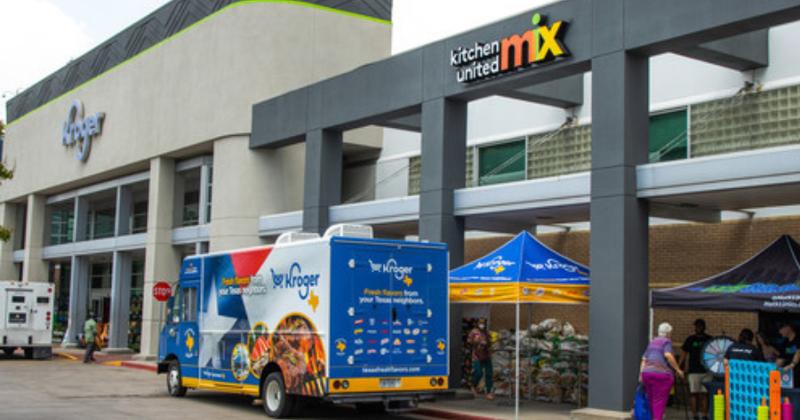 Ghost kitchen provider Kitchen United is about to get a lot bigger—and Kroger is a key part of that strategy, according to its CEO.

The Pasadena, Calif.-based company founded in 2017 currently has about 30 outlets operating or in the works nationwide. But it believes it can grow to 500 within the next five years, CEO Michael Montagano said. That would be a nearly 17-fold increase.

Fueling that push is a fresh $100 million investment that includes contributions from some of KU’s closest commercial partners, including Kroger. They will not only help fund the company’s growth but also provide much of the space for it.

Kroger has been adding Kitchen United hubs to its grocery stores, opening its third location last month in Dallas. Simon Property Group is bringing KU’s technology to restaurants at its malls. Kroger has more than 2,700 stores in the U.S., while Simon owns nearly 200 malls, offering a large potential runway for KU to expand its network.

“That is the plan,” Montagano said.

Meanwhile, Burger King and Popeyes parent Restaurant Brands International (RBI) and the owner of c-store giant Circle K also contributed funding and intend to deepen their relationships with KU. Montagano declined to provide specifics on what that might look like, but said RBI and Alimentation Couche-Tard would have more to say soon.

The investment, which also included Google’s GV fund and Happy Meal supplier HAVI Group, underscored Kitchen United’s unique connection to food, real estate and technology. The company began as an operator of multi-restaurant kitchen hubs that produce food for to-go only. Those facilities have their own tech system, called Kitchen United OS, that allows customers to order from multiple restaurants at once and coordinates the timing on the back end.

Over the past year, its real-estate strategy has evolved to feature more visible, high-traffic locations—including inside grocery stores. It has also brought its tech system to mall food courts, allowing them to tap into off-premise channels. And it has been rolling out what it calls Outposts, which allows food halls or even clusters of restaurants to use its technology as an ordering system to field group orders from corporate customers.

The overarching theme is to help brick-and-mortar businesses extend their reach into the digital world in an efficient manner.

“Our vision is not to go into the restaurant industry or the c-store industry or the real estate industry and disrupt it,” Montagano said. “Our goal has been and continues to be to enable market incumbents to adapt and evolve to the changing consumer preference for off-premise.”

Asked which of the above formats has the most white space, he underlined the opportunity provided by Kroger and Simon. But tech licensing is also a big area of emphasis given its lower capital requirements. Stand-alone kitchen centers, Montagano said, will be used as a fill-in strategy. Exhibit A is the company’s newest outlet, a Kitchen United in Frisco, Texas, that joins the recently opened location in a Dallas Kroger.

“All of [the formats] have been strategically chosen because of their ability to scale and the capex efficiency for us to be able to scale,” Montagano said.

They also reflect a key transformation in Kitchen United’s strategy, which has shifted from delivery to embrace pickup and even dine-in business. In its Kroger locations, for instance, a bulk of the transactions are order-ahead pickups. Its sites also get “a fair amount” of walkup traffic, Montagano said, especially around lunchtime—and then act more like a traditional ghost kitchen during dinner and late at night.

The moves seem designed to ease some of the challenges faced by delivery-only businesses, such as low visibility and a dependence on costly delivery orders. A food hall-style Kitchen United in downtown Chicago, for instance, has a full bar and space for guests to dine on-site.

Regardless of format, “delivery is still an important part of that mix, and still in many cases close to 50% of volume,” he said. “So to us it is a hybrid between all of these that makes up a considerable amount of the overall.”

And it appears the company is ready to broaden its offering beyond hot food, a step that’s hinted at by the investment from Circle K as well as KU’s toehold in malls. In theory, the company's technology could allow a customer to order a burger from the food court and a pair of shoes from Macy’s in a single transaction.

“By far, the biggest opportunity in the short-term is being able to diversify the offering to our end customers beyond just prepared cuisine,” Montagano said.

“The larger idea is the same, and that is that we are taking a real estate asset, we’re pairing it with a robust technology asset … to maximize it for the entire day,” he said. “That’s the big thesis.”

This story originally appeared in WGB sister publication Restaurant Business and has been modified slightly for WGB readers.