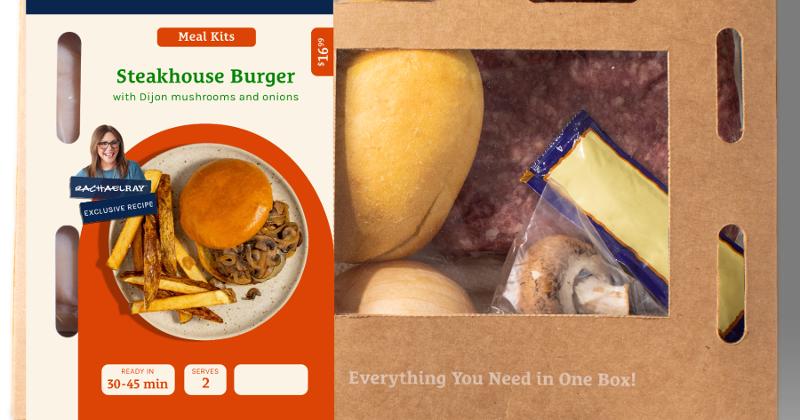 "Rachael Ray, widely known for her quick, easy-to-prepare recipes, popular cooking shows and best-selling cookbooks, and Home Chef have come together to offer a series of meals from new Rachael recipes that are simple, convenient and delicious," said Dan De La Rosa, group vice president of fresh merchandising, in a statement. "Personalized food experiences do not have to be complicated. We know customers have busy schedules and we're excited to offer special meal kits that even the most inexperienced home cook can prepare, offered in collaboration with Rachael Ray."

New meal kits featuring her recipes will be available each month in more than 1,300 stores across the Kroger family of companies, through mid-March. The first kit, in stores now, guides customers through an easy-to-follow recipe created by Ray for a steakhouse burger with Dijon mushrooms and onions. The series will include meals like pork lo mein with carrots and bok choy, spicy sloppy joes with oven fries, and more.

In July, the meal kit-maker welcomed the brand's new state-of-the-art production center in Douglasville, Georgia, expanding the company's presence in the Southeast.

Home Chef is the meal kit brand run as a subsidiary of The Kroger Co., offering direct-to-consumer subscriptions for home delivery as well as a variety of meal solutions, including traditional meal kits, oven-ready dinners and ready-to-heat meals at Kroger stores.

Kroger merged with Chicago-based Home Chef in 2018, in a transaction with an initial price of $200 million, with future earnout payments of up to $500 million over five years contingent on achieving certain milestones, including significant growth of in-store and online meal kit sales.