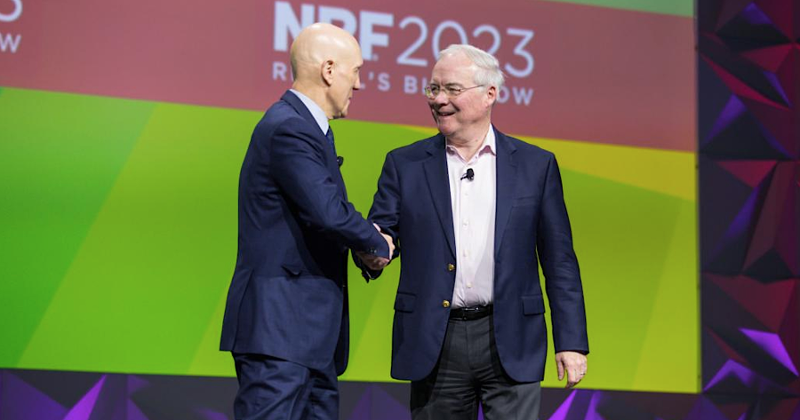 To Rodney McMullen, chairman and CEO of The Kroger Co., much of the formula for successful grocery retailing comes down to making things simpler for the customer.

In a keynote presentation on Monday at the NRF 2023 Retail’s Big Show, McMullen discussed Kroger’s efforts to help shoppers with elevated grocery prices, the rising importance of technology and the rationale behind the Kroger-Albertsons merger deal in a talk with National Retail Federation President and CEO Matthew Shay.

“We like to try to do everything we can to make it easy on a customer,” McMullen told Shay before a crowd at Manhattan’s Jacob Javits Center. “They’ll engage with us in a store. They’ll get one-hour delivery, 30-minute delivery or next-day delivery. They’ll use our app and put their shopping list together. They’ll download their digital coupons to help stretch their budget. All they talk about is being inspired in the food they want. They don’t ever talk about the ways we talk about it in terms of online or in-store. They just talk about it terms what’s easy for them at that particular point in time.”

Inflationary pressure has remained high in the U.S. economy over the past 18 months and, despite a recent letup, consumers in general have shifted spending from discretionary goods to essential items like food and groceries, Shay said. In that environment, Kroger has “done an amazing job in continuing to deliver value,” he noted. 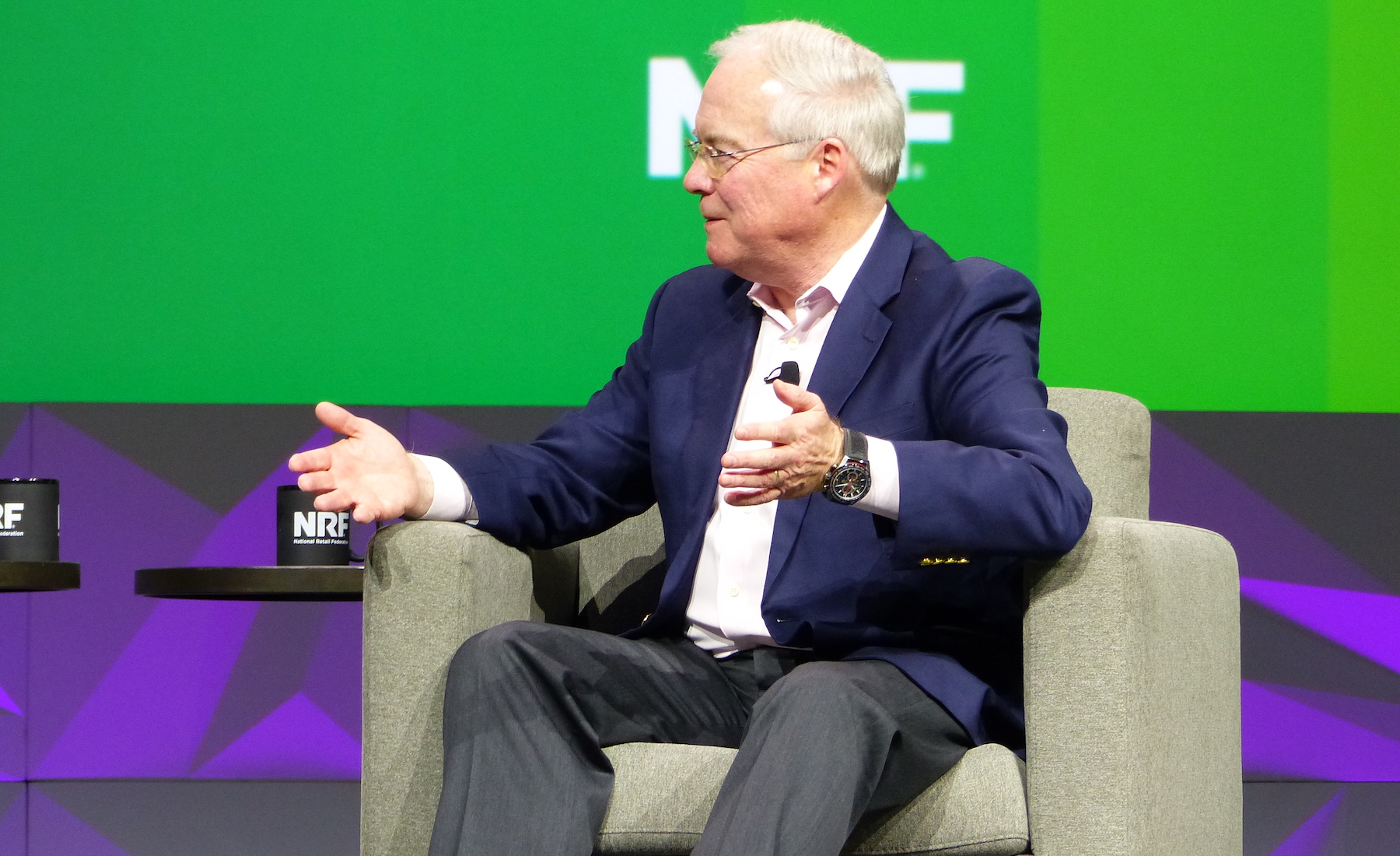 “We worry about it every day,” McMullen said of inflation’s impact on shoppers. “About half of our customers are under a lot of strain from a financial perspective, and their wages haven’t kept up with the inflation, because a much higher percentage of their spend would be on things that are higher-inflationary categories. So what we look at, first of all, is how we work together with CPG manufacturers to lower our combined costs. And what we find time and time again is they may be doing a backhaul that’s empty somewhere, or we may be doing a backhaul that’s empty somewhere. How do you use data to partner with everybody to figure out how can you take costs out of the system so that you're able to share that with the customer?”

“I think it’s up to over a trillion coupons that have been downloaded since we started, well over multiple billions a year, and we will curate that experience based on your household” he explained. “What we’re predicting are things that will help you stretch your budget. One of the things that we’re finding right now is that some CPGs are trying to get in front of the cost increases.”

Kroger’s private brands, too, give customers another avenue to cost savings, and more shoppers are discovering they like the quality, McMullen noted.

“Our Brands [Kroger’s private-label portfolio] is gaining a meaningful share of market. And what we find is when customers switch to Our Brands—initially to save money—the experience is so good that they stay with us, even when they're budget is a little less strained,” he said. “We’re not going to put our name on something if the experience isn't as good or better than the national brand.”

Technology’s role in retail has continued to swell, as shown by the preponderance of tech exhibits on the NRF show floor, Shay pointed out. McMullen said the same trend has taken place at Kroger and across the grocery industry. 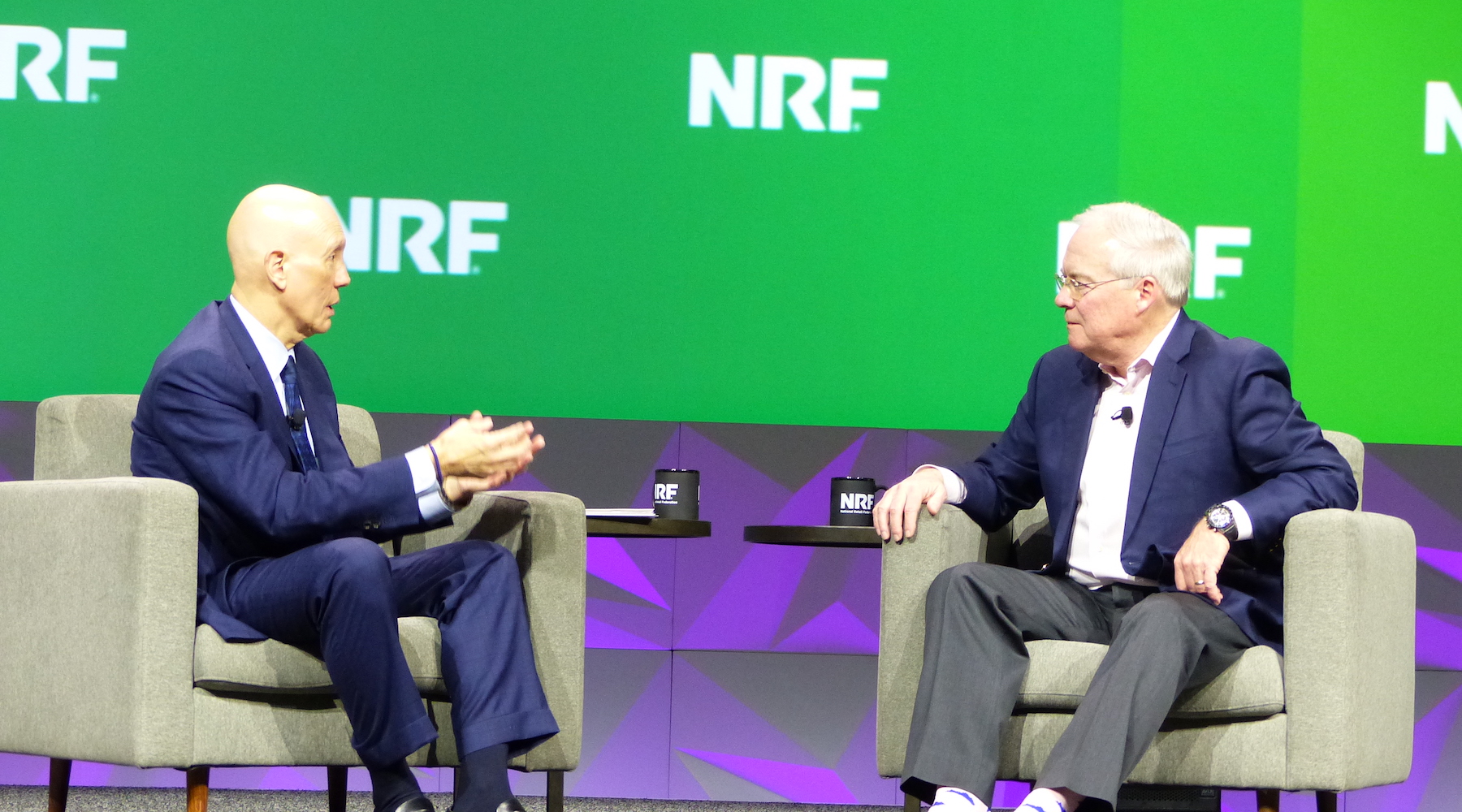 McMullen (right) emphasized to NRF's Shay (left) and Kroger's and Albertsons' value are "100% aligned" as they proceed with their merger deal. / Photo: Russell Redman

“You look at the allocation of resources—both expense and capital—to technology, it would be three or four times what it was even five years ago. And we don’t see anything at all slowing that down,” Kroger’s CEO said. “And one of the things in the merger with Albertsons that we're working on, is we’ve assumed very modest synergies on technology. Obviously, we won’t do overlap areas, but what we’re going to do is reallocate to be able to do even more, because technology affects everything that we do.

“For us, we’re constantly focusing on how are we using technology to make it easier for the customer to inspire them on what’s for dinner, uh, help stretch their budget a little bit and to get groceries how they want to get them,” he added. “And then for our associates, all the things that you’ve talked about, AI or machine learning, affects most of the things you do. If you think about in-stocks, when I worked at a store, you physically wrote down stuff. I can’t imagine how you would ever have the company functioning at 2,700 stores and $140 billion-plus revenue [today] if you were still trying to write stuff down.”

Kroger and Albertson’s $24.6 billion merger deal, unveiled in mid-October and pending regulatory and other approvals, will “create a tremendous amount of synergies” for the combined company, McMullen told Shay.

“Some of those synergies are created because we might have two warehouses and we’re shipping stuff from our warehouse here to stores here and vice versa. Obviously, you’ll eliminate that and significantly reduce the number of miles driven, which will save money and reduce the environmental footprint,” McMullen said. “When you look at savings, we've committed $500 million to customers on lowering prices. And every store that we keep, we will begin lowering prices day one. We’ve been doing that for our own business since 2006. We’ve reduced pricing by over $5 million on an annual basis. We’ve also committed $1.3 billion [with the merger] to help support our customers, in terms of remodels, experiences and things like that in the store. Both of us always believe if you do what’s right for the customer, you do what’s right for the associates, and you support your communities, the shareholder gets the benefit of that.”

Cincinnati-based Kroger and Boise, Idaho-based Albertsons Cos., the nation’s largest and second-largest supermarket retailers, also are on the same page in company’s values, McMullen added about the planned merger.

“At Albertsons, [CEO] Vivek [Sankaran] and his team have done an amazing job, and before that [former chairman and CEO] Bob Miller, on assembling a group of high-market-share businesses across the U.S. and really have done a nice job of improving that customer experience and associate experience,” he said. “And for us, we never merged with anyone that we don’t think their values and our values are 100% aligned.”