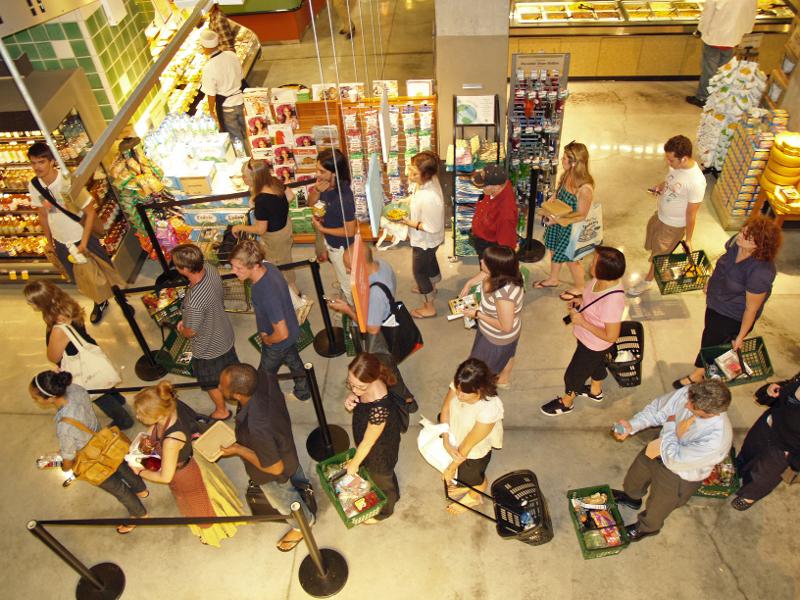 I was in Boston a few weeks ago doing research for our October cover story and had the TV tuned to the local Fox station’s morning news when a teaser came on announcing: “Coming up – how to save time at the supermarket checkout.”

I was so intrigued that I stayed tuned through several more segments and did not even switch over to the ABC affiliate to watch the beginning of Live with Kelly and…. which I enjoy tuning into when I am home to catch the latest gossip and the whacky Travel Trivia game. Finally, the long-awaited segment came on—and lasted all of 41 seconds. I know because I taped it figuring I might be able to finagle a news story out of this research.

In a nutshell, the unattributed study found the best way to save time in a grocery store line is to pick the line with the customers with the most items in their cart.

“You should get behind someone with a full cart,” the anchorman said. “Research shows it takes shoppers about 41 seconds to greet the cashier, pay and leave, meaning the line of customers with a few items each could take longer than the line with one person with a big purchase. Experts say self-checkout lanes are faster when they are available. It is estimated Americans spend 37 billion hours a year waiting in lines.”

To which the anchorwoman responded: “40 seconds? Get behind me. It’s like 10 seconds. Hello. Swipe. Leave. But that’s when you can go on Facebook though. When you are waiting on line you can catch up on all your day’s news—or the weather,” as the camera cut to the weathergirl who started talking about the station’s new weather app.

I do not know who did this research, but obviously they did not ask me. I would have told them about the time I was in Kings and got behind a lady with a large order. After the cashier finished ringing her up, her credit card was declined and I had to stand there while every item was re-swiped and taken off her bill.

Then there was the time I was in ShopRite and got behind a customer with a large order only to find that the Gerber cereal they selected was the only variety not covered under the WIC food stamps. I had to once again stand and wait while the customer’s husband walked six aisles over to the baby food aisle and took his sweet time finding the right cereal. He was gone so long I began to steam—and so did my $1.98 Hungry-Man dinners as the frost on the cartons started to melt and evaporate.

Also in another ShopRite I have gotten behind a customer who was arguing with the cashier because the one La Rouge Royale red sweet pepper that he bought was scanning at $2.00-and something a pound and not $1.29 a pound like the sign stated, and that he had always bought them and they were always $1.29 a pound. I had to wait while the produce clerk came over and escorted the customer back to the department to check the sign. Turns out the $1.29 peppers were red bell peppers on the bottom shelf and sign for the La Rouge peppers was over them on the second shelf.

Or how about when I was in Walmart and the lady in front of me tried using an expired Families First card to buy a 98-cent loaf of bread, a pound of Oscar Mayer bologna and a jar of jelly. She entered the wrong PIN number and the card was rejected. She insisted there was still money on it and the cashier had her swipe it and enter the PIN again. It was again rejected. She tried a third time. Same thing. Then she realized maybe she had the wrong PIN number but when she entered that number the cash register froze suspecting a fraudulent account. That was 20 minutes of my life that I will never get back again.

So I guess the moral of this story is to save time in the supermarket checkout lane don’t worry about getting behind the shopper with the biggest or smallest order—just don’t get behind me because invariably whoever is in front of me is going to have a major time consuming problem that is going to have me leaving the store with a bad taste in my mouth.