Amazon is increasing its minimum wage to $15 per hour for all of its U.S. employees, including part-time and temporary workers, effective Nov. 1. The company also said it will advocate for a higher federal minimum wage—moves that could put added pressure on competitors already spending millions on increased wages and benefits.

The change will result in a pay raise for more than 250,000 Amazon employees, as well as more than 100,000 seasonal workers expected to be hired by the Seattle-based e-commerce giant for the upcoming holiday season.

The pay raises come as Amazon faces scrutiny over its relationship with workers, including rumblings that some employees of its Whole Foods Markets stores were seeking union representation because of being unhappy with job cuts and process changes in the wake of Amazon’s acquisition of the grocery chain last year. 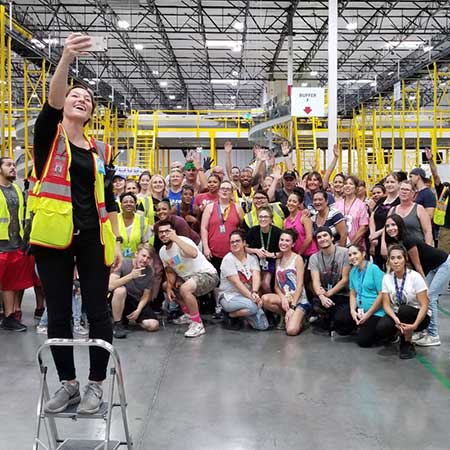 “We listened to our critics, thought hard about what we wanted to do, and decided we want to lead,” Jeff Bezos, Amazon’s founder and CEO, said in a statement. “We’re excited about this change and encourage our competitors and other large employers to join us.”

The change underscores competition in the retail industry for workers amid record low unemployment accompanying a new awareness from employers of the importance of employee satisfaction and customer service as an element of their financial success and reputation.

Amazon said its public policy team will also begin advocating for an increase in the federal minimum wage, which is set at $7.25, although many individual states have higher rates.

“We intend to advocate for a minimum wage increase that will have a profound impact on the lives of tens of millions of people and families across this country,” Jay Carney, SVP of global corporate affairs for Amazon, said in a release.

The company did not say what rate it would advocate: “We believe $7.25 is too low. We would look to Congress to decide the parameters of a new, higher federal minimum wage."

Retail wages have increased by 15% since 2006, according to the Bureau of Labor Statistics. Target a year ago said it would pay its workers a minimum of $15 per hour by 2020; many retailers in the meantime have turned a portion of their tax breaks toward investments in wages, training and other benefits, such as family leave and education, with an eye toward reducing costly turnover and improving customer service.

Amazon employs more than 575,000 worldwide. It said its U.S. workers would continue to receive “industry leading” benefits, including healthcare; life and disability insurance; up to 20 weeks of paid parental leave; matching 401(k); skill-training; and a program called Career Choice, which prepays 95% of associates’ tuition for courses in high-demand fields, whether those jobs are at Amazon or another company.