What kinds of messages are the retail prepared foods department sending to consumers? The results of Tyson Foods’ Prepared Foods Challenge revealed two basic flaws of traditional messaging. One is that most retailers have failed to harness the power of communication showing consumers how to use the prepared foods department. The second flaw of traditional messaging is that it focuses on product and price, which neither educates nor inspires shoppers to create meals they can be proud to serve.1

Tyson Foods’ deli division wondered what would happen if the message was tweaked. If shoppers knew how to use the department, would they be able to create meals that inspire? Would equipping them with educational tools to make easy, delicious meals featuring prepared foods empower them to shop the deli more frequently?

To test the theory, Tyson Foods partnered with a leading food retailer, collaborating with their consumer marketing, merchandising and digital teams in more than 160 stores as test sites.2 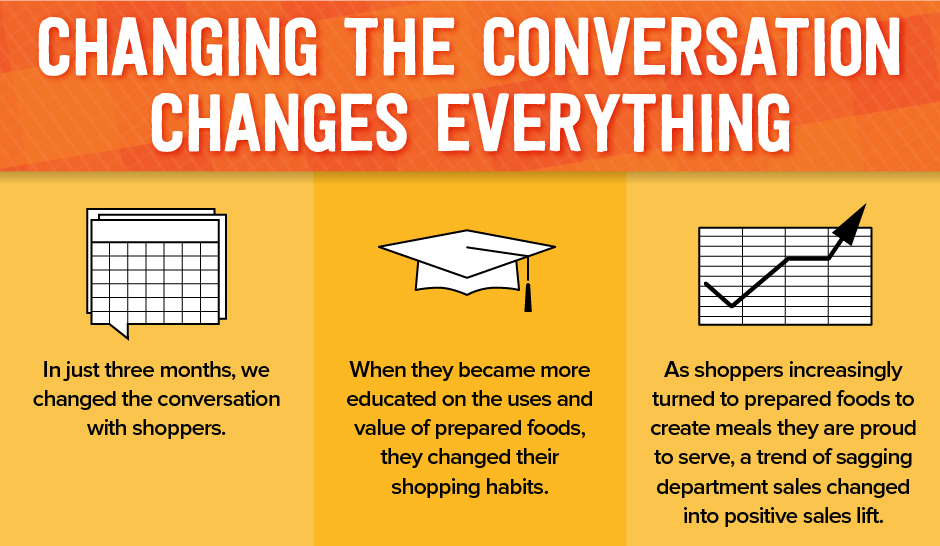 Prior to the program start, rotisserie chicken sales were trending down -12%. By the campaign end, they were up +5%.

Tyson Foods set an aggressive campaign goal to increase sales and volume by at least 1.5%, at full margin. The objective was to reach that goal by showing shoppers how to use the department to create meals that inspire, instead of focusing on product and price. Turns out, this minor messaging tweak to foster awareness and educate shoppers was a game-changer.

By campaign end, prepared chicken and rotisserie sales grew an average of 14%and 17%, respectively. Digital advertising specifically drove overall lift, with more than 27 million impressions and 85,000 visits to the store’s website. During the program, Tyson digital content accounted for 40% of all page views on the retailer's website. Clearly, creating awareness and educating consumers on the uses and value of prepared foods made it forefront in their consideration set for purchase.

Everyone gets a trophy

Deli shoppers weren’t the only ones who benefitted from this particular experiment. There were valuable learnings during the process for both retailers and suppliers to develop more meaningful conversations with consumers. 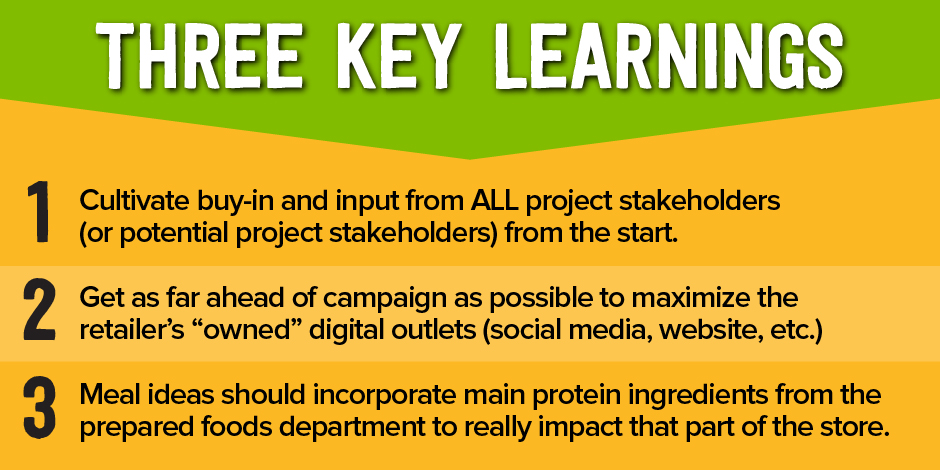 Besides the impressive sales lift results, one of the most significant takeaways from this campaign was that the participating stores outpaced the retailer’s average growth in both rotisserie chicken and prepared chicken overall. This clearly demonstrates the effectiveness of coordinated messaging to drive incremental sales at full margin and signals a new kind of collaborative approach to the retailer and manufacturer partnership. It is one that the retailer now considers a model for other suppliers and categories moving forward.

Find out more about the unique ways Tyson Deli is approaching prepared foods at https://www.tysonvelocity.com/exclusive60