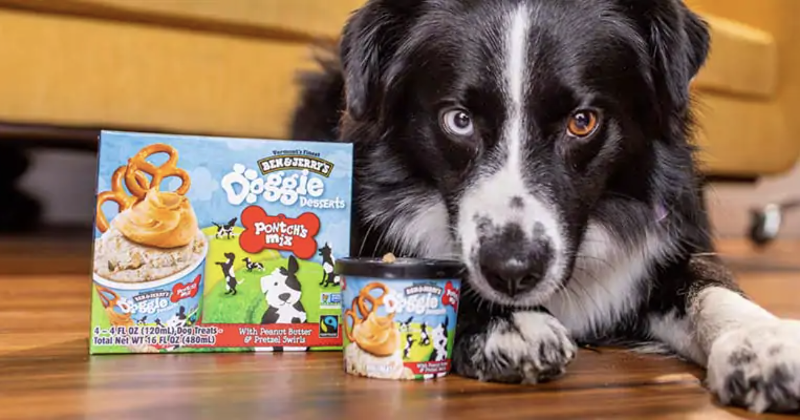 Ben & Jerry's has launched Doggie Desserts, a new line of frozen desserts meant to be enjoyed by all of the dogs watching their owners reach for a pint and a spoon mid-pandemic.

Because dairy-based ice creams are a no-go for dogs, Ben & Jerry's Doggie Desserts cups use a base of sunflower seed butter. They contain only "very limited amounts of dairy," according to the company. Currently, the cups are available in two flavors: Rosie's Batch (pumpkin with miniature cookies) and Pontch's Mix (peanut butter with pretzels).

The desserts sell in single-portion cups and in four-cup multipacks. Depending on the grocer, the South Burlington, Vt.-based ice-cream specialist notes, consumers will find Doggie Desserts either alongside other frozen dog foods or with Ben & Jerry's for-humans treats.

For any two-legged household members tempted to sample the treats (or who grab the wrong container after reaching aimlessly into the freezer), Ben & Jerry's states the following: "While Doggie Desserts frozen dog treats were developed specifically for pups and are not labeled for human enjoyment, they do use the same ingredients that you’d find in our flavors made for humans. So they are perfectly safe for you to taste."

The American Pet Products Association reports that more than half of pet owners consider themselves very brand-loyal when it comes to food for their pets. For Ben & Jerry's, a longstanding and loyal fan base of ingredient-conscious customers drawn as much to the company's social advocacy as to its flavors may prove a receptive audience when it comes to a product designed for pets. Moreover, the APPA noted in a news release in November, "More than 60% of pet owners are shopping for pet care items in brick-and-mortar stores, while the percentage of those shopping at online-only outlets like Amazon and Chewy.com remains consistent at 15%." Launching in the same stores—possibly the same aisle—where consumers are buying their regular groceries may promote trial.

This isn't Ben & Jerry's first foray with sunflower-seed butter as a dessert base, either. Last January, the company introduced sunflower-seed butter as the base for three new nondairy frozen desserts for humans. In announcing the new offerings, Ben & Jerry's said it had "made no secret of its desire to be the biggest and best purveyor of super-premium, non-dairy frozen desserts."