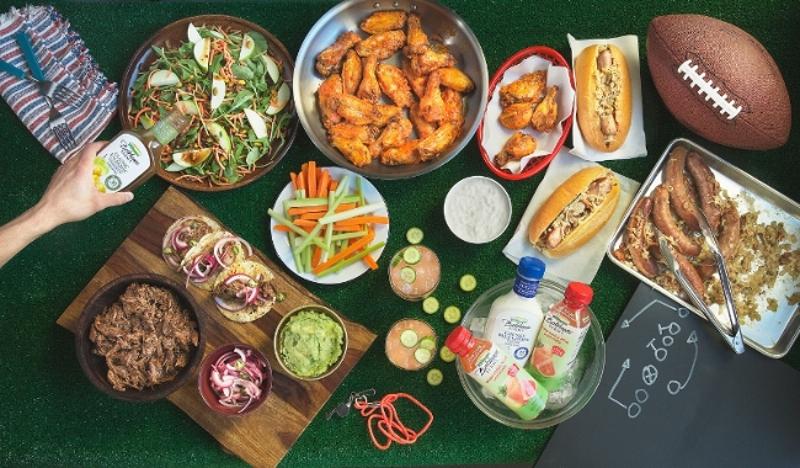 Bolthouse Farms is gearing up for the Big Game. The "Big Game Party in a Box," featuring Bolthouse Farms products, Chef'd and Minnesota Vikings Kyle Rudolph and Chad Greenway, will deliver original recipes with fresh ingredients as part of two new Chef'd meal kits inspired by the star players' favorite tailgate grub. The game day meal kits are designed to tackle the planning and prep, and help party hosts score with dishes that include Rudolph's Bratwurst Sandwiches or Greenway's 4-Hour Pulled Pork Tacos.

Football players turned foodies, Rudolph and Greenway will demonstrate their kitchen skills in a head-to-head cook-off competition viewable on Chefd.com/partybox. Viewers that vote on the website for their favorite meal kit, as well as purchasers, will be entered to win an assortment of prizes, including a football tailgate package of their choice for the 2016/17 season. Each "Big Game Party in a Box" ordered will also give back to the Twin-Cities community. Rudolph will donate a portion of the proceeds from his meal kit to the University of Minnesota Children's Hospital while Greenway will contribute to his Lead the Way Foundation.

"This meal kit is an opportunity to elevate consumers' game-day experience at home during an occasion where fruits and vegetables typically sit on the sidelines," says Suzanne Ginestro, chief marketing and innovation officer at C-Fresh, a division of the Campbell Soup Company.

The "Big Game Party in a Box" is available for pre-order on Chefd.com/partybox from January 8 through February 8, 2016 for $119. Each meal kit is designed to serve eight people, and will be shipped for delivery in time for the Big Game.

"We are thrilled to kick off the partnership with Bolthouse Farms through the Big Game Party in the Box Meal Kit Promotion," says Kyle Ransford, CEO, Chef'd. "It is the perfect opportunity to reinforce our collaborative mission to make fresh ingredients and healthier food options more accessible for every occasion."

Rudolph and Greenway are also vying for votes through a head-to-head cook-off video to compete for the fan favorite dish. After watching the video viewers can vote for their favorite meal and enter the "Big Game Party in a Box" sweepstakes for a chance to win a football tailgate package for the 2016/17 regular season game of their choice, autographed player memorabilia or Chef'd gift cards. Every order will also automatically enter the purchaser for a chance to win, limit one entry per person.