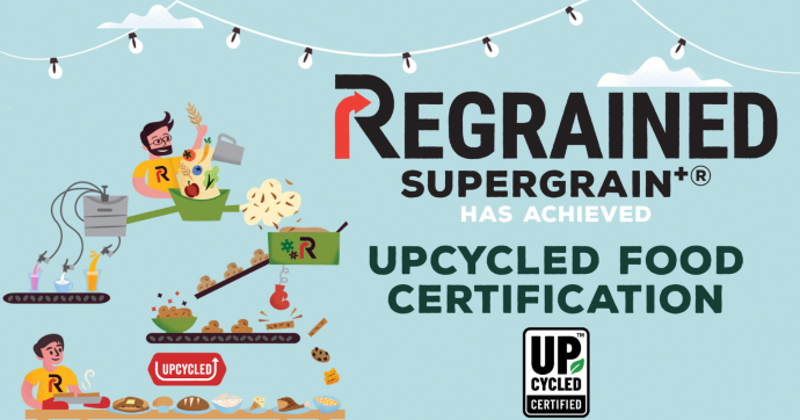 ReGrained's SuperGrain, a fiber-rich flour made from spent grain left over after the beer brewing process, is the first certified upcycled ingredient under the UFA's certification program, which launched in April to recognize producers recovering, reusing and repurposing ingredients to help reduce food waste.

More than 20 billion pounds of brewer's spent grain is generated in the U.S. each year, ReGrained noted in a news release, and most of that grain goes to waste. Every pound recovered and reused, according to Berkeley, Calif.-based ReGrained, prevents the carbon dioxide equivalent of burning one pound of coal.

"Nearly 35% of the world's food is lost or wasted, which generates 8% of greenhouse gas emissions," said ReGrained CEO Dan Kurzrock, who also serves on UFA's board of directors. "We are honored to achieve the first upcycled ingredient certification and are excited to support our partners in developing certifiable finished products."

In addition to SuperGrain, which the company touts as containing more than three times the fiber and twice the protein of whole-grain flours, ReGrained sells ingredients made from oats spent during oatmilk production and fruit pulp left over after juicing to food manufacturer and foodservice customers.

The UFA's Upcycled Food certification is based on definitions and standards established throughout more than a year's worth of collaboration among food-industry stakeholders and legal and policy experts, according to the association. "The long-term vision of the standard is to guide the food system towards increased economic and environmental sustainability," the UFA's website notes. The UFA, founded in 2019 by a registered dietitian and a former member of the Denver Sustainable Food Policy Council, counts more than 170 businesses across 20 countries in its business network, with more than half of these producing finished CPG items.

Upcycling has seen awareness and interest grow among CPG companies, retailers and consumers alike in the past several years, with the Specialty Food Association flagging it in its 2018 trendspotting report. In May, Kroger Co. announced 10 companies that specialize in upcycling and the use of surplus products that will receive $100,000 each in funding as part of the company's Zero Hunger | Zero Waste initiative. The 10 selected companies—chosen from among 145 applicants—will receive guidance on sourcing funding and networking with investors to grow their businesses.