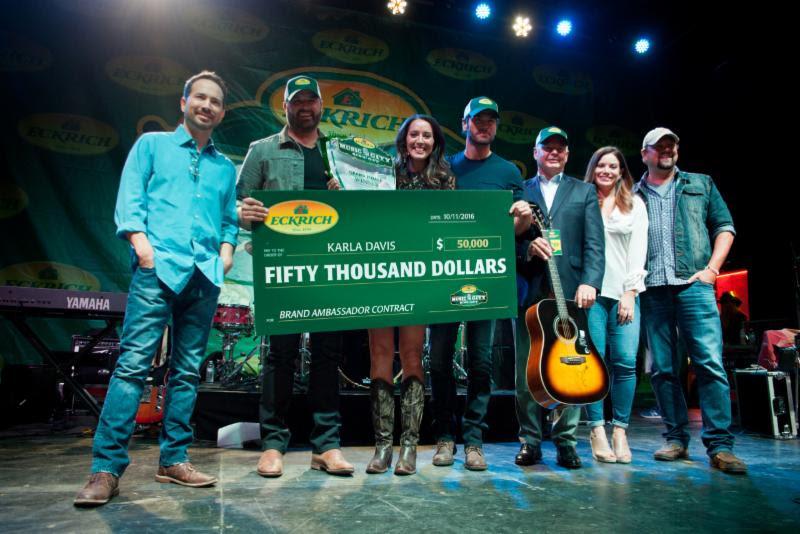 In front of a live crowd of thousands of fans, Davis from Monroe, N.C., and now living in Nashville, Tenn., was named as the winner by a panel of judges highlighted by Platinum-selling country music artist Randy Houser and Grammy-nominated producer, Dave Brainard.

Davis not only won a $50,000 brand ambassador contract with Eckrich, but also the opportunity to record a single with Brainard. Davis was the winner of the Columbus, Ohio regional contest held earlier this year and was thrilled to win the finale competition.

"I won and I was not expecting it," said Davis. "This feels like the best day of my life. Eckrich had this opportunity and I told myself to jump in with both feet.  Sometimes you just need a break and this is mine. I do know when you're in Nashville, you have the best talent and you're just looking for that big opportunity.  Eckrich has provided that for me and I'm ready to work with them and work with Dave Brainard. I just feel so lucky that I won and it's a great feeling."

The final competition was a fierce sing-off that featured the winners from all four qualifying contests which occurred across the country this summer. Each contestant performed for the judges who scored the competitors based on presentation, originality and creativity, melody, vocal ability and music and entertainment value. Brainard was impressed by the winner and is looking forward to working with them in the studio.

"It was great that Eckrich could bring all this talent to Nashville," said Brainard. "To work with Karla is going to be fantastic. There is something in her voice and in her songwriting that really makes her standout.  Her experience showed tonight and it's appealing for me to work with someone who has showcased great talent."

Houser was amazed by the talent of all the competitors and is especially excited for Davis.

"This contest by Eckrich is great because it gives someone a boost in their career," said Houser. "I loved that Karla played her guitar like a songwriter. You could tell that she was comfortable doing that. She wasn't trying to play the same song I've heard all day on the radio and she showed a lot of originality."

The Eckrich "Music City Sing-Off" finale will be featured nationally on the Great American Country (GAC) network, during their popular program, Top 20 Country Countdown, which will premier on Oct. 21.

"Eckrich is proud to support aspiring country music artists through our 'Music City Sing-Off' competition," said Jennifer Zmrhal, senior director of marketing for Smithfield Foods. "We want to congratulate Karla Davis as the winner of this year's competition. We are excited to work with Davis throughout 2017 as our newest brand ambassador. We also want to thank all of the finalists for a great finale."

How the Pandemic Tested Industry Culture

Target Kicks Off the Year With a Bonus