When it comes to today’s hottest trends in crunchy snacks, what’s in the product is as important as what isn’t. Plant-based munchies that deliver protein, fiber and flavor, and are also free of artificial ingredients, are non-GMO and, in some cases, gluten-free, are resonating with consumers like never before.

As consumers continue to replace meals with snacks, they seek convenience and nutritional value without compromising on flavor and eating enjoyment. The U.S. market for salty snacks alone is forecast to reach $29 billion in 2022, according to the report Salty Snacks: U.S. Market Trends and Opportunities from market research firm Packaged Facts, Rockville, Md.

One of the fastest-growing snacks in the produce aisle, Peatos has expanded its presence from just 100 stores last year to about 5,200 today. “Peatos is exploding,” Desai says, “and we’re getting a huge amount of exposure from our key retail partners,” such as Cincinnati-based The Kroger Co., which began selling the snack chainwide in May 2018.

“Kroger went from six facings to 21 facings in its stores,” he continues. “It’s almost quadruple the real estate.”

At a Denver King Soopers store (a Kroger banner), a display unit flanks the produce department with a sign that reads, “Picked at the Peak of Freshness!” The fixture is filled with Peatos, Wonderful Pistachios, Calbee North America’s Harvest Snaps and a host of other plant-based snacks.

In the highly competitive snack market, taste is everything—regardless of whether that snack is classic junk food or an all-natural better-for-you option. “The new consumer is not willing to make a sacrifice,” Desai says. “They want it all. Better for you is important, but it also has to taste great. If it tastes like cardboard, it’s not going to fly.”

Consider the plant-based Beyond Meat ground beef alternative, which recently went public and was immediately valued at more than $4 billion. “Beyond Meat had to replicate the experience of eating meat in every way,” he says. “It had to taste and feel like meat. It had to ‘bleed’ like meat.”

“Two snack brands—Doritos and Cheetos—combined are $3.7 billion in sales and are about equal the size of the $3.6 billion natural snack business,” says Desai. “Cheetos grew 6% last year. All of grocery grew just 2%. We want to go directly after these [traditional snack food] consumers.

“There’s a small percentage of people who are eating healthy and shopping at Whole Foods,” he continues. “We want to reach every Walmart and Kroger shopper.”

As the mother of two “bona fide snack food junkies,” Poorvi Patodia, CEO and founder of Biena Snacks in Boston, Mass., is also on a mission to bring great-tasting, nutritionally relevant, better-for-you snacks to the masses. “While many consumers are reaching for better-for-you snacks, indulgence is still a priority,” she says. “People are balancing their sweet and salty cravings against their overall health and wellness.

“Another big trend is the shift in what consumers expect from their better-for-you snacks,” Patodia says. “It was once about simply replacing artificial ingredients with natural or organic ingredients. Now, to address consumer demand, brands like Biena are pushing things a little further by creating snacks that use only clean ingredients but also provide real nutritional value and taste delicious.” 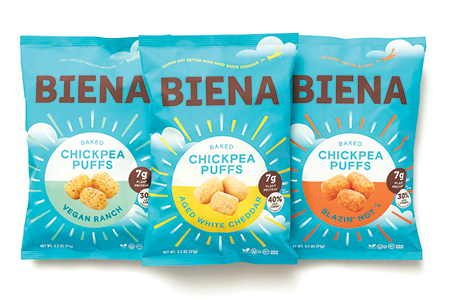 Biena recently launched a new line of Chickpea Puffs that are made from a simple list of ingredients, including chickpeas and lentils, and offer 7 grams of plant protein and up to 40% less carbs than other leading puffed snack brands.

While Biena has been successful at stores such as Whole Foods, where shoppers are looking for healthier options and are typically mindful of what they eat, Patodia also sees tremendous potential in traditional retail channels.

“More conventional grocery retailers like Stop & Shop and Wegmans, and big-box stores like Target have also been successful for us,” she says. “It just shows that consumers are getting smart about what they’re eating and are looking for options that align with their nutritional goals.”

While snack producers have long tapped vegetables such as corn and potatoes to tempt taste buds, today’s plant-based snacks are made from a wide array of alternative vegetables and fruits, such as lentils, peas, cauliflower, chickpeas and coconut.

“Sales are certainly on the rise for plant-based alternative snacks,” says Stephanie Latorre, VP of marketing for From the Ground Up, Fairfield, N.J. “Knowledge is growing, eating patterns are shifting, and options are widening not only in snacks but in all product categories. As plant-based becomes more mainstream, we predict this trend will only see continued growth.”

From the Ground Up, which makes cauliflower-based crackers and pretzels, recently added Cauliflower Tortilla Chips to its lineup. “The idea behind its creation was to elevate the category beyond grain-free,” Latorre says. “It hits the sweet spot of today’s top trend because it’s vegetable-based, but it is also grain free, gluten-free and non-GMO.”

Providing an “easy way to eat real anywhere,” is how Tom Stingelin, director for PepsiCo, Purchase, N.Y.—parent of San Francisco-based Bare Snacks—describes the idea behind his company’s chips made from real fruits and veggies.

Some Safeway stores around the country are cross-merchandising varieties of Bare Apple Chips alongside fresh apples as a way of engaging produce shoppers with another convenient way to enjoy their favorite fruit on the go. And just as consumers expect the produce aisle to offer the freshest and highest-quality products, shoppers demand the best from packaged goods in this department. 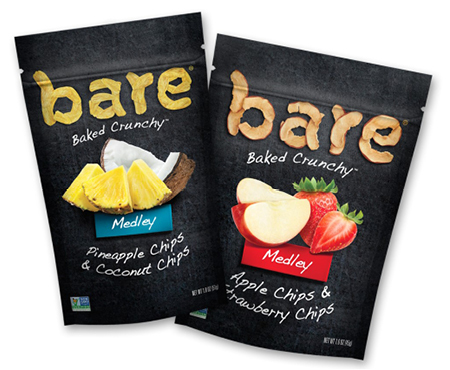 “When it comes to snacks, consumers aren’t trading convenience for quality,” says Stingelin, pointing to Nielsen data. “And, as with other categories, they are striving to be more mindful snackers and are searching for clean, transparent labels.”

Creator of Snacks Gone Simple, Bare Snacks’ portfolio of on-the-go nibbles includes fruits, coconuts and veggies baked into crunchy chips. All of the Bare Snacks are made with simple ingredients such as real fruit and/or veggies. They are also all Non-GMO Project verified and contain no preservatives.

New for Bare Snacks is a line of baked, never fried fruit and coconut chip blends that rolled out this spring. Available in two varieties that were inspired by Bare fan favorites, the new snacks combine Bare Pineapple Chips & Coconut Chips, as well as Apple Chips and Strawberry Chips in new Medleys.

“The lines are blurring between natural and everything else,” says Eric Healy, founder and CEO of Bend, Ore.-based AvoLov, maker of avocado chips from 100% Hass avocados. Healy exhibited at the Sweets & Snacks Expo at Chicago’s McCormick Place in May.

“The trends we used to see at Expo West have now expanded everywhere,” he says. “Everything has to have a natural element.” And that includes crunchy snacks. Healy also points to plant-based and “good fats” that are popular with followers of keto and paleo diet as hot trends. “Products with simpler ingredient decks, lower sugar and low carbs are really doing well,” he says.

In its first foray into a non-avocado-based product, AvoLov launched its new B’nanerLov Chewy Banana Bites at the Sweets & Snacks Expo. “We have a unique patented dried process that is especially good with sensitive fruit like bananas and avocados that brown easily,” Healy says. While conventional banana chips are typically fried and chewy, the B’nanerLov Chewy Banana Bites retain their original color and flavor, and they have a marshmallow-like texture.

Flavors, due to launch in the next month or so, include Banana Cream Pie and Cinnamon Churro.

One of the most coveted ingredients in everything from beverages to snacks, CBD is increasingly on the menu for a growing number of companies.

“The top three trends I see sticking around are plant-based everything, CBD and personalized nutrition," says Livio Bisterzo, founder and chairman of Los Angeles-based Hippeas. “Vegan and plant-based products are becoming mainstream, and we’re going to keep seeing more sustainable solutions and meat alternatives. I’m also impressed by the early traction CBD is getting and how it’s established its own category. I see more and more entrepreneurs heading into this space, and I definitely think it’s here to stay.”

Bisterzo also sees a trend in brands building direct relationships with consumers, allowing them to customize and personalize products for different nutritional needs.

Nutrition and plant protein played big roles in the development of the Hippeas brand. “At Hippeas, we are proud to be a leader in the plant-based snack category and have seen impressive growth year over year,” he says. 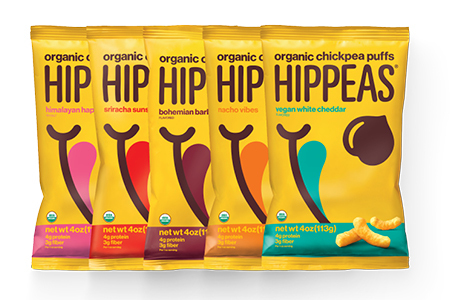 Hippeas recently launched new Nacho Vibes, a better-for-you puff, and Himalayan Happiness, a chickpea puff with a sprinkle of salt.