Everywhere from conventional supermarkets to natural grocers to big-box stores, sales of single-serve, ready-to-drink (RTD) dairy-alternative and dairy-based beverages that are high in protein, low in sugar and convenient to consume are soaring. Beverages that offer a functional component are also driving the category to record sales.

Single-serve has become so hot that some grocers, such as San Antonio-based Central Market, reportedly have a designated buyer specifically for the category, while its parent company, H-E-B, recently expanded its refrigerated single-serve, plant-based RTD beverage offerings in select stores as well.

In the natural channel, Austin, Texas-based Whole Foods Market and Sprouts Farmers Market of Phoenix both feature a bevy of RTD dairy alternative and dairy-based beverages in their grab-and-go and shelf-stable aisles.

“Sprouts was one of the first retailers to put our Kids Packs on shelf as single cartons in the shelf-stable kids set, allowing customers a low-commitment option when trying our products and helping to introduce Ripple to more new consumers,” says Niloy Phukan, director of sales for Ripple Foods, a plant-based dairy-alternative supplier in Emeryville, Calif.

Minneapolis-based Target Corp. also has taken a multipronged and successful merchandising approach to single-serve dairy and nondairy beverages. “Target has been a great partner for us and has merchandised our 12-ounce single-serve milks in both its grab-and-go beverage sets, as well as checkout stand coolers,” Phukan says.

Consumers have a “growing appetite for protein,” according to Nielsen, which reports that 55% of U.S. households say high protein is an important factor when buying food. And, while Nielsen also cites the increasing popularity of plant-based options, its data shows that consumers are still looking to traditional meat, eggs and dairy as their primary protein source.

“The ready-to-drink beverage segment is a $2.8 billion category, growing more than 5% year over year, and we don’t see that trend slowing down in the near future,” says Alex Schams, senior associate brand manager for Organic Valley in La Farge, Wis., citing SPINS data for the 52 weeks ending April 21, 2019. “Dairy-based ready-to-drink beverages are outpacing the total category with more than 9% year-over-year growth.”

Many of the same trends that are driving plant-based options are also fueling demand in the single-serve dairy-based RTD category. High protein and low sugar; functional ingredients; sustainable and organic; and convenience and portability are all top of mind for consumers, who “are consistently seeking higher quality items with high protein, low sugar and convenience to meet their busy on-the-go lifestyles,” Schams says. “And we’re seeing that trend directly translating to the ready-to-drink beverage category.”

In response to this demand, Organic Valley is set to launch a reformulated version of Organic Fuel in the third quarter of this year. Available in Chocolate, Vanilla and Coffee, each flavor will be available as single-serve 11-ounce bottles and in four-packs or 12-packs. “These new products meet consumers’ desires for high protein with 20 grams of organic protein per 11-ounce bottle and low sugar,” Schams says. Organic Valley has updated its formulation of vanilla and chocolate to have 50% less sugar than before.

“Consumers are striving to balance healthy eating with the demands of their busy lives, but they refuse to sacrifice taste for nutrition,” says Bill Kelly, chief marketing officer for Chicago-based Fairlife, which filters out the lactose and sugar from its milk. The brand is targeting health-conscious snack and meal-replacement consumers with its Smart Snacks and Core Power RTD beverages. 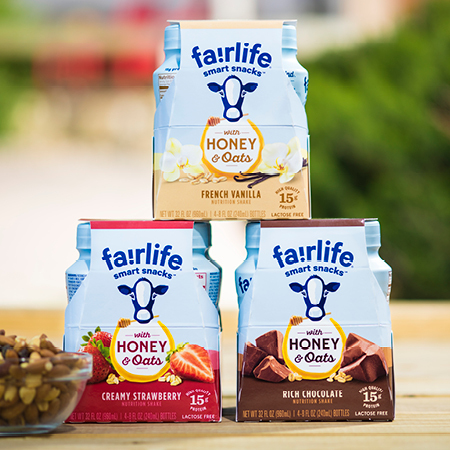 Introduced last year, Smart Snacks are intended to help curb hunger between meals, with 15 grams of protein and 5 grams of fiber in each bottle. Designed to help athletes recover after workout sessions, Core Power high-protein shakes are available in five varieties.

The company is currently conducting a lead launch of its newest product, Fairlife nutrition plan, at Westborough, Mass.-based BJ’s Wholesale Clubs. “It’s a delicious meal replacement shake with 30 grams of protein, 2 grams of sugar and only 150 calories,” Kelly says.