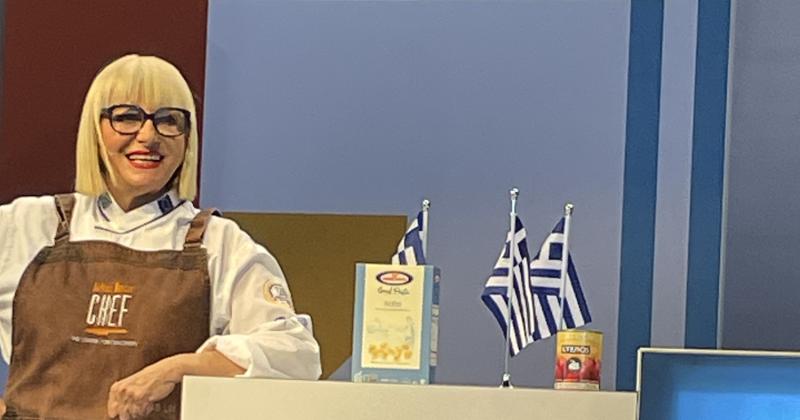 Chef Maria Loi's culinary demo at the National Restaurant Association Show on May 24 offered everything Greek: feta, olive oil, saganaki, oregano and κέφι, which loosely translates into English as passion, fun and excitement.

Often referred to as the Julia Child of Greece, Loi is an internationally renowned entrepreneur, author, TV personality and philanthropist. She is also the founder of Loi Food products, a specialty brand that is built on traditional ingredients from Greece and is available at Whole Foods Markets.

During the "Let's Talk Womxn Entrepreneurs: Power, Parity and Positive Collaboration" event at the National Restaurant Association Show, Loi shared strategies for business growth and solutions for parity in the industry.

Loi, who grew up in a small village in Greece, said she's working to change the world—one healthy Greek bite at a time. She admitted in her demo presentation that she inadvertently became a chef at a young age after she was left to do the cooking after her mother fell ill. “I made meatballs when I was 7 years old,” Loi said, who still travels with her grandmother’s wooden spoons.

Loi seeks to marry food with family in all that she does. During her demo, she offered tips she learned from her mother and grandmother in the Greek village of Thermo. Although surrounded by farmland growing up, it wasn’t until her return in her adult life that she recognized the “beauty of honey, olive oil, yogurt and fresh vegetables.”

When asked about the Greek diet (she authored a book of the same name), Loi said there is no hidden secret to healthy eating, but recognizing the essential staples is key.

“I start with celery, onion and carrots. The French call it mirepoix. I call it miracle.” Loi said. With three restaurants to her name, currently including Loi Estiatorio in Manhattan, Loi has cooked for celebrities and U.S. presidents, and is the official ambassador of greek gastronomy by the Chef’s Club of Greece. But it is her κέφι that welcomes all.