Weather may not have as much to do with California or Florida’s high soup consumption: The average age of the largest base of soup consumers tends to be older, says Ginger Costa, executive chef for Belmont Market in Wakefield, R.I. “A big part of our clientele are a lot of retired people,” she says. Many of the soup consumers are singles or people who simply don’t want to cook and are looking for an easy meal.

Belmont Market, which is located in a state in which temperatures can get bitter cold, still does well with soup sales in the summer, selling 96 gallons of New England clam chowder a week. At the height of soup sales, the store can go through 25 to 30 gallons of all varieties a day.

Sales of ready-to-eat soup grew 16.5% in 2018, according to Nielsen, with ready-to-eat stew sales rising 40.6% from the prior year. Soup in the center store aisles has struggled a bit, accounting for $1.73 billion in sales in 2018, an increase of less than 1% compared to the previous year, while soups sold in the prepared foods or deli department saw sales of $544.6 million. So canned soup is still big business compared to fresh, but fresh soup is seeing much more growth, with more than $1 of every $4 spent on ready-to-eat soup occurring in retail foodservice. 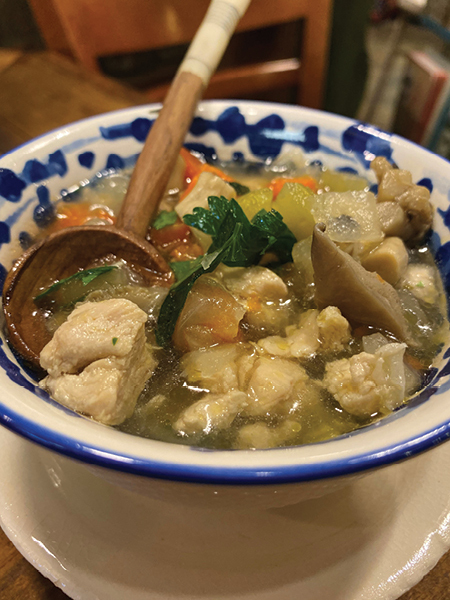 “For restaurants like Panera, steakhouses or other places, soup sales are as high as they’ve ever been,” Sewall says. “Supermarkets like it because they can execute it quickly and get it up fast. In the realm of [prepared foods], fresh soup is probably one of the easiest things to execute at store level.”

Soup sales also are doing well because supermarkets have embraced the combo meal, similar to restaurants. It’s easy for supermarkets to allow customers to tack on an 8-ounce soup for 99 cents to their sandwich or salad, Sewall says.

A lot of people also are purchasing the 8-ounce size to go along with a roll at Belmont Market, Costa says, which has inspired her kitchen staff to begin working with the bakery to figure out how to produce a cost-effective bread bowl and cross-merchandise it beside the soups.

While the 8-ounce may be the perfect size for a bread bowl, the most popular size at Belmont Market is the 16-ounce size that is more ideal for a whole meal. It outsells the 8-ounce and 32-ounce cups 2-to-1, Costa says.

Promotions Can Be Simple

Simple promotions can also help soup sales. Sewall related a story about a Midwestern independent retailer that sent a 50-cents-off promotion via text message on a Monday in the summer and soup sales went through the roof. The 31-unit chain sold 4,700 gallons of soup on that one day.

While soup is a year-round seller, the varieties that people crave can change based on season. Summer options tend to be more broth based and less cream based, Sewall says, and maybe lower in calories. But he notes that for many places, bisques, chowders and French onion are mainstays all year.

Costa agrees. Belmont Market always has clam chowder available. “We serve four varieties [of soup] all the time,” she says. “We do a vegetarian, a chicken, New England clam chowder because it’s New England, and then we have what we call the whatever soup.” This fourth option can be pork, beef or some other type of soup that is not a traditional mainstay. It can be a beef chili or something that features brisket or German pork. “You name it, we do it,” she says.

In addition to flavor variety, Costa tries to make sure the soups on hand have visual variety too. “We try to make them look different,” Costa says. “Creamy versus broth versus a bean or a lentil. A lot of thought and planning goes into the rotations of the soup.”

The two mainstays for Belmont Market are the chowder and chicken, although the chicken variety can be anything from chicken noodle to chicken and rice, and those are available no matter the season. Other popular varieties are Italian wedding, tomato gorgonzola and Persian yellow split pea. “These are just so masterful and they look beautiful,” Costa says.

Offering these types of varieties is what makes the soup a must-stop category for retailers, Sewall says, because it allows consumers to think, “This is where I buy my soup because they have the most flavors; they always have it out, [so] I know I can get it.”

Along with variety, “merchandising is key,” Sewall says. The better the display or section looks, the more confidence customers will have in the product. Belmont Market has an employee dedicated to manning the soup station to ensure the kettles are kept full and the area kept clean. Hygiene is of upmost importance, with the biggest challenge often the customers themselves.

“Serving hot soup has its problems,” Costa says. “People have no idea about hygiene sometimes.” A video of a man sipping soup from a soup kettle’s ladle in a supermarket (not Belmont Market) went viral last year, providing all the wrong kinds of promotion for the category.

To help combat the natural messiness of the soup station, Belmont Market started using a chalkboard next to the station to announce the varieties as opposed to laminated placards in front of the kettles themselves. Each kettle is numbered and customers can look to the chalkboard to find the variety of the corresponding kettle number. 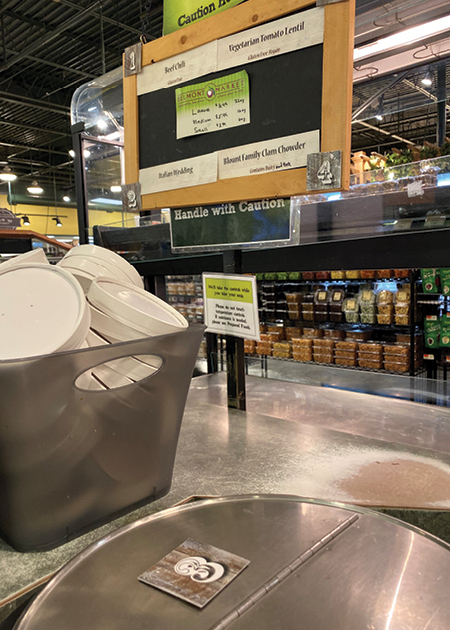 Inside the Race to Catch Online Grocery’s ‘Unlimited Demand’

Big Y to Close for 2 Days Over Easter

The Battle Between Farming and Farm Tech

FDA is 'All Words, No Action' on CBD