Fast-casual concepts such as Panera and Chipotle have been the darlings of the restaurant world. They generated $42.2 billion in U.S. sales in 2018, up 8% from the previous year and far outstripping the rest of the restaurant industry growth, according to Technomic, WGB’s sister research and market insights company. But the segment is seeing surging competition from fast food as chains such as McDonald’s and Chick-fil-A up their game when it comes to product quality.

What does this mean for retail foodservice?

“The first thing is understanding that you’re not competing against another grocery store,” says Lewis Shaye, president of Grocerant Design Group, a consulting firm based in Columbia, S.C. “You are competing against the fast-casual and fast-food world.” And supermarkets already have a strike against them when it comes to foodservice, because customers have to get out of their cars, walk across the parking lot and through the store—a big hurdle in today’s convenience-minded, fast-paced environment.

While it is not insurmountable, Shaye says retailers need to be conscious of all the occasions for which they won’t be able to fulfill the needs. “Drive-thru is an occasion, dine-in is an occasion, carryout is an occasion,” he says. “As soon as you eliminate one or two of those items, retailers are narrowing their audience, because convenience is driving much of what’s going on in the industry.”

One of the biggest convenience game changers in recent years is the introduction of third-party delivery companies, such as Uber Eats, Grubhub and DoorDash. While many supermarkets have been hesitant to expand into delivery of prepared foods through these third-party ventures, often because of prohibitive fees, Shaye says it’s worth looking into.

“Start with a smaller menu,” he suggests, beginning with items that will withstand hold times and heat fairly well, such as chicken. “You don’t have to start with everything.”

Specialty grocer Uncle Giuseppe’s Marketplace, with seven locations in New York and New Jersey, uses third-party deliverers for a range of products, including gourmet sandwiches, wraps, salads and pizzas. The regional retailer also recently expanded its sandwich and salad offerings, says Jillian Gundy, marketing manager. “People are on their lunch break and they want to have our food delivered to them for a quality meal, and it’s easy,” she says. “The orders have been increasing and the new customers are increasing.” 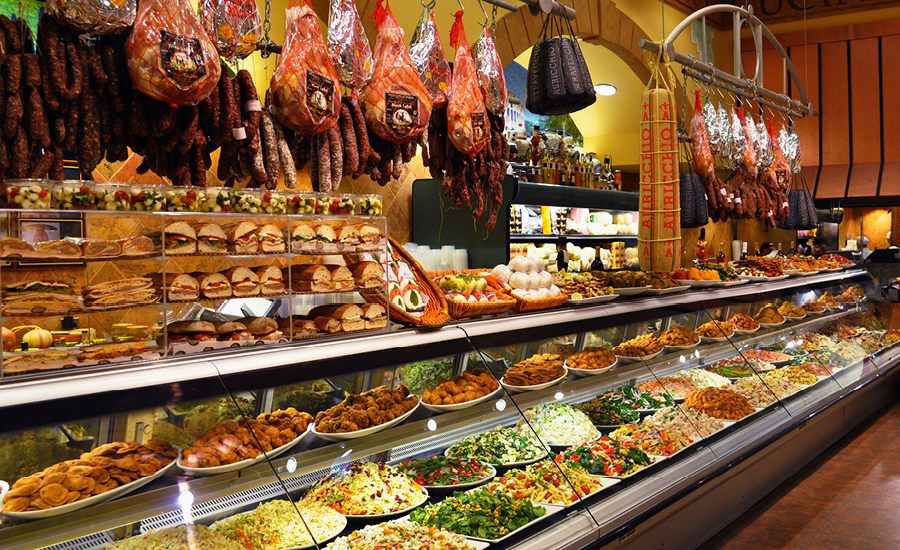 The Quality and Value Proposition

Creating a truly unique experience, both in the products offered and the atmosphere of the store, can help combat some of the inherent inconvenience retail foodservice presents. While the Paneras and Chipotles of the world market quality ingredients heavily, retail foodservice can get an upper hand with both its high quality and in-season ingredients that can help diversify their product offerings.

“The biggest thing we do is make sure the menu is unique, like offering a different portion size that [might be] a little more value-added,” says Aaron Ballard, executive chef for West Valley City, Utah-based Harmons. He says the stores offer a teriyaki bowl, a popular item in the area, that is priced slightly lower than the ones offered at a local fast-casual chain. “Value with high-quality ingredients along with freshness is key,” he says.

Harmons recently opened Just Burgers, a burger concept that offers a wagyu beef burger. The high-quality offer means a higher price point, which has required some customer education. “Our customers’ biggest complaint has been ‘Why am I paying $13.50 for a burger meal in a grocery store? I should be paying $7,’” says Ballard. “So the price perception for grocery, at least for burgers, is fairly low. We’ve had to do quite a bit of asking our customers to taste it first before they decide anything.”

Shaye of Grocerant Design Group suggests retailers select a few things to specialize in, whether it’s sandwiches or salads, and then go all-in with those items. “Make some products a priority and go deep in a few of them,” he says. “Become an expert. If you’re choosing sandwiches, have some of the usual suspects but also have some unique sandwich combinations, whether it’s the bread, the sauce or whatever you choose. You have to come up with some angles to create maximum differentiation.”

At Oliver’s Market, which has four locations in Sonoma County, Calif., the grab-and-go section is where the foodservice department decided to go deep. “It’s not just two types of salad that we have in our grab-and-go; we’re offering maybe 20 different types,” says Corporate Executive Chef Mark Kowalkowski. The varieties run the gamut and include several seasonal offerings that change frequently. The stores also are continuously expanding the hot bar and salad bar options.

“It allows the customer to have a wide variety of options, and it allows us to adjust to the seasonality of the ingredients,” he says.

Another element of success is perseverance; do not always expect immediate success. Shaye suggests having a plan for 12 to 16 weeks before making any decisions on changes that might be needed. Kowalkowski agrees.

“I think the biggest thing is commitment to stay with it. I think we’ve learned that you really have to stick with it for the long haul,” he says, citing the pizzeria at the Stony Point Oliver’s Market in Santa Rosa, Calif., as an example. It offers Roman-style pizza, and the first six months were hit or miss, Kowalkowski says. Three years later, however, the pizza has a large following.

A Sense of Comfort

Convenience is a big factor in why customers choose where they eat, but when it comes to fast casual, the atmosphere also plays a role, particularly as a gathering place for customers to come in and linger before, during or after enjoying a sandwich or a cup of coffee. In order for retailers to be in the game, “they have to create a space where people will want to stay,” Shaye says. “It doesn’t mean stay for hours and hours, but you have to create a space where people will feel comfortable.”

To that end, retailers have to think about seating and making sure there is a mix of seating styles. This can range from high- and low-top tables to upholstered and unupholstered chairs and even couches and easy chairs for lounging.

Shaye also reminds retailers to think about lighting. Harsh fluorescent lights do no favors to the foodservice area, so a move to LED or another type of energy-efficient lighting is important. “Lighting is super critical because it creates emotion,” he says. “If you have the wrong kind of lighting, you are telling them to just go. The right kind of lighting tells them to relax, just sit down, and it feels good.”

While the lighting in the seating area is critical, so is the lighting over the food in the actual display area. “It behooves the [retailer] to really look at the spectrum of light, anywhere from 2,700 kelvin up to 5,000 daylight,” Shaye says. “Some foods do better with certain levels of lighting to showcase them. I want to mention shadows, because sometimes you want to have some darkness in between pops of light to really make the areas you want to stand out.”

A combination of welcoming atmosphere and quality products will set retailers up for success when it comes to competing with the fast-casual segment.

“We are not just a supermarket, we are an experience,” says Gundy of Uncle Giuseppe’s. “Coming to our stores, you feel right at home.” Now that’s something all retailers strive for.