“Consumers want more protein in their diets,” says Megan Speas, foodservice marketing lead for Cargill Protein in Wichita, Kan., a processor of beef, poultry, value-added meats and egg products to foodservice companies and retailers. According to Cargill’s Power of Protein research study, 7 out of 10 consumers are making high-protein food and beverages a part of their diet, and 40% of the protein they choose is animal. The independent research was conducted by Reach Brand Strategy to provide insight on protein market trends.

“We see themes emerging around how and when consumers are eating proteins, and which ones they prefer,” Speas says. Everything from snacks as meals to real food with transparency and authenticity and a growing demand for unique eating experiences/global cuisine is shaping the types of protein menu items that consumers seek from the supermarket deli. “While most consumers are not particularly focused on the specific quantities of protein, providing protein volume information on menus is welcomed by most.”

It’s as true today as it was more than two decades ago: When it comes to supermarket foodservice, there’s nothing that drives shoppers to the deli like a juicy, ready-to-eat bird.

Costco Wholesale Corp.’s wildly popular $4.99 rotisserie chickens consistently finds shoppers flocking to its warehouse stores. The succulent birds are such a draw, Costco’s CFO recently said, that the Issaquah, Wash.-based club retailer was willing to lose as much as $40 million a year to keep its rotisserie chickens at the unbeatable price point.

Costco is building a $300 million plant in Nebraska to produce its own poultry. Once in production, the plant is expected to produce about 100 million chickens a year.

Opportunity to Beef Up Sales

While beef is the top protein in foodservice and accounts for about a third of fresh meat and poultry volume in retail, it represents just more than 5% of volume for retail foodservice, according to Technomic, which says beef is an untapped market: Its data finds 69% of the most frequent prepared foods shoppers hankering for more beef on the menu. 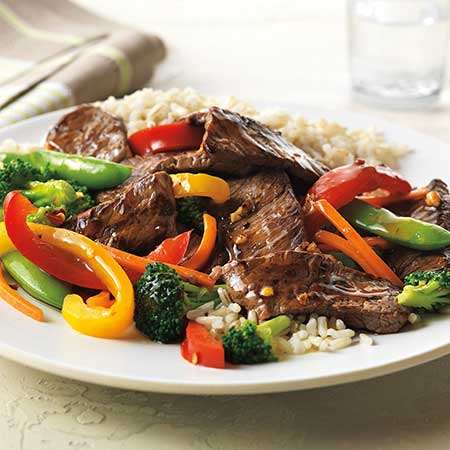 In an effort to better understand the role of beef in supermarket foodservice, the National Cattlemen’s Beef Association’s Beef Checkoff Program funded a market test at a major U.S. grocery retailer, which featured expanded beef options within the hot foods bar of its in-store restaurant cafe. All items were merchandised as a meal that included two side items and a dinner roll for $6.99.

The response was overwhelmingly positive, with 93% of shoppers “overall satisfied” with the beef item they purchased. The grocer succeeded in elevating and differentiating its supermarket foodservice department, driving shopper interest and spurring repeat purchases that boosted the stores’ bottom lines, according to the Beef Checkoff’s case study.

Bellying Up to Burger Bars

The original grab-and-go American fast food, burgers are beloved by scores of consumers. While today’s take on the perfect patty runs the gamut from all-beef to vegetarian and mushroom-enhanced, burgers are a $1 billion business.

“Burger bars are a great idea for a retailer looking to steal business away from the local casual dining or fast-food stop during the lunch hours,” says Jason Jerome, senior director, retail engagement, brand marketing and communications for the National Cattlemen’s Beef Association, Centennial, Colo.

“The most important factor in a burger bar is options,” Jerome says. “From bread and cheese to condiments and toppings, the customer should be able to customize his/her burger more than anywhere else.”

It’s something Rochester, N.Y.-based Wegmans Food Markets does exceptionally well. Nearly a dozen of its stores feature The Burger Bar by Wegmans, where shoppers can purchase a variety of freshly made sandwiches with an array of toppings that include an American Classic Burger, a Mushroom Burger (made from a combination of beef and portabella mushrooms), a Santa Monica Turkey Burger or a vegetarian Mexican Black Bean Burger.

“Burger bars are a great opportunity to highlight items that come from the store, specifically if they’re made in the store,” Jerome says. “For example, the hamburger patties should come from the meat department, the cheese from the deli, buns from the bakery and the toppings from produce.”

Grocers and suppliers alike have awakened to the tremendous potential for foodservice sales at breakfast time and beyond. Offering tasty proteins that consumers can eat on the go, from egg and sausage sandwiches to protein-packed breakfast burritos, is critical to success.

“Breakfast continues to be an area of growth and innovation in foodservice, with almost half (46%) of consumers enjoying breakfast foods outside of the breakfast daypart,” Speas of Cargill says. “In addition, breakfast is a stable part of our routine. On average, consumers eat breakfast 301 days per year.”

When it comes to weekday breakfast, Cargill finds that habit and convenience drive most consumers. However, younger consumers (ages 18-34) are more willing to try new locations, with 41% visiting more new restaurants for breakfast than two years ago.

“Taste of the food and convenience of location are the top motivators for consumers when they are selecting an away-from-home location for breakfast,” says Speas, pointing out that 33% “eat their weekday breakfasts in transit.”

Of the reasons cited, “healthy” doesn’t make the list. “We’ve seen a decline in consumers looking for ‘healthy options’ from supermarket foodservice menus,” says Byrne of Technomic. The amount of consumers seeking healthy options from prepared foods has dropped from 36% to 33% in the past three years.

“With the steadying of the economy and a nearly full employment rate, what happens is that people start indulging,” Byrne says. “Taste and flavor is on the rise, whereas healthy options are less important drivers.”