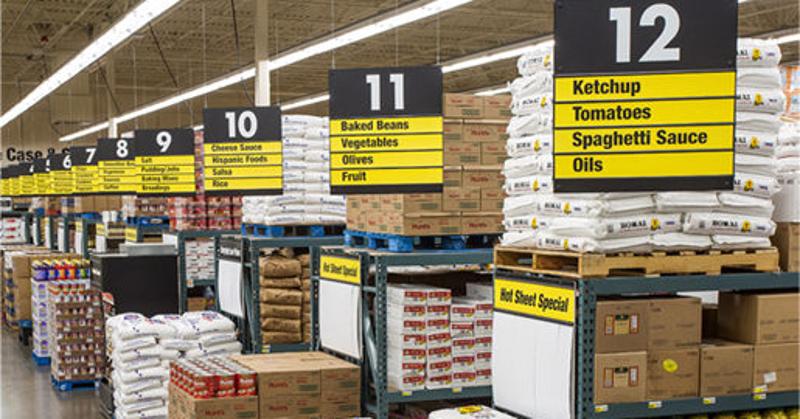 Smart Foodservice had been a secondary part of the banner name, known officially as Cash & Carry Smart Foodservice, for 13 years, said Division President Derek Jones in an earnings conference call late Wednesday. He said the new name would allow the company to have a more distinct identity that would enable accelerated unit growth.

“We wanted to have branding that was relevant to new customers and even to existing customers. And so transitioning to a name that is not ubiquitous and found everywhere across the country made a lot of sense to us,” Jones said.

While sales improved 4% at Smart & Final stores, comps were flat during the period, Hirz said, explaining that inflation softened relative to the fourth quarter to 1.4% from 1.7%. That trend is continuing, and Smart & Final now expects inflation of just 1% for the year vs. prior expectations of 2%.

Hirz said the company raised its own promotional spend in response, but that the chain would also be cautious and “not chase negative margin sales that don't build any customer loyalty.”

“In the Smart & Final banner, the promotional environment for household customers remains elevated particularly within the so-called high-low price approach used by conventional supermarket competitors,” Hirz said. “While we have moderately increased our promotional spending rate, we continue to be a consistent value price operator, which our household and business customers have come to expect, differentiating us from the conventional grocers.”

Companywide net sales for the quarter, which ended March 25, increased 5.1% to $1 billion. Net sales for Smart & Final banner stores were $795.2 million, a 4% increase, while Smart Foodservice sales of $221 million increased by 9.4%.

The company posted a net loss of $7.1 million, vs. a $4.6 million loss in last year’s first quarter. Adjusted net loss was $2.8 million, or 4 cents per share, which was slightly better than Wall Street expectations.