Retail foodservice has an opportunity to unseat even the most popular restaurants in town. Freshness, quality, value and convenience are key, but promoting chef-inspired cuisine, cart-side cocktails, weekly specials and delivery give shoppers no reason to look beyond their local grocer when they don’t feel like cooking.

Purchases in retail foodservice are on the rise, with 66% of consumers buying prepared foods from retail at least three times a month, up from 55% in 2017, according to the 2019 Retail Foodservice Consumer Trend Report from Chicago-based Technomic, WGB’s sister research firm.

The vast majority (73%) of prepared foods occasions are taken to go, according to the report. As purchase frequency increases, so do the prepared foods menu options at retail, says Technomic, which finds breakfast is becoming an important revenue stream.

Overall, 62% of prepared foods consumers buy retail foodservice breakfast at least once a month, up from 56% in 2017, according to the report.

“Foodservice within grocery is one of the fastest-growing areas in the supermarket,” says Rob Wilson, managing director of LEK Consulting, a management consulting firm with U.S. headquarters in Boston and retail clients worldwide. “One reason we think it will continue to be one of the biggest growth areas is because everyone is scared to death of Amazon. Prepared foods aren’t something they can do.” At least not on a large scale yet.

While the well-received Amazon Go has about two dozen locations that are either open for business or in development, grocers are the gatekeepers of retail foodservice—for the time being.

When it comes to promoting retail foodservice, “the biggest key is to have it in-store, hitting the consumer in the face,” says Wilson.

He points to West Des Moines, Iowa-based Hy-Vee Inc., which has made grocery shopping, purchasing prepared foods to go and dining in a Hy-Vee Market Grille a satisfyingly seamless experience. “At Hy-Vee, you feel like you’re in a food court,” Wilson says. “There’s made-to-order grilled burgers, a scratch bakery and seating.”

Both food halls and full-service restaurant experiences are rolling out more frequently, according to the 2019 Retail Foodservice Consumer Trend Report from Technomic. As such, it has become increasingly important for grocers to broadcast their restaurant-quality offerings in-store and online.

Hy-Vee’s Market Grille promotes its restaurant-worthy weekly dine-in specials, including appetizer and bar drink deals; kids-eat-free Tuesdays (with the purchase of an adult entree); and Wine Down Wednesdays, which woo shoppers with half-priced sushi and select half-priced bottles of wine.

Adult beverages are an increasingly important part of retail foodservice: Forty percent of 23- to 34-year-olds say they are more likely to order alcohol at retail foodservice than they were two years ago, according to the Technomic report.

“Supermarkets are evolving away from bad sushi and fried chicken to something people actually look forward to eating for lunch or dinner,” Wilson says. “Look at Marks & Spencer—it’s jammed at lunch, selling predominantly food to go.”

Marks & Spencer’s new layered grab-and-go veg pots are available in a variety of ready-to-eat and ready-to-heat options. Helping to promote these items and more is its team of celebrity tasters, who try the grocer’s newest dishes each month, select their favorites and tout them via #MyMarksFave on social media. Monthly video segments featuring the tasters in action are also posted on Marks & Spencer’s website.

AJ’s dine-in sushi bar happy hour (2:30-4:30 p.m. daily) is a traffic driver, while its Chef Station team of sushi chefs, who are available for on-site sushi making at customers’ homes, offices or party venues, are elevating grocery store catering to a new level. 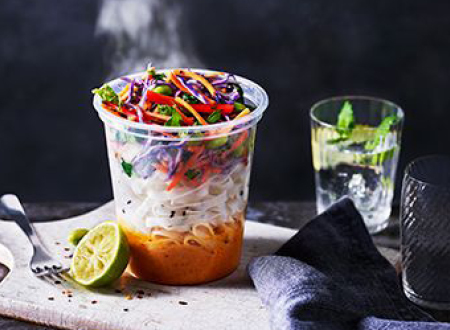 Outdoor signage and seating are another effective way to promote a retail foodservice operation, says Wilson, pointing to Chicago-area Standard Market. The store is designed around the perimeter with restaurants open and connected to the grocery store. “Just driving by the store, you can see there’s a restaurant there,” he says.

Standard Market Grill offers a variety of made-to-order dishes that feature fresh, seasonal ingredients sourced from Standard Market, including ground burgers, hand-tossed artisan pizzas, sandwiches made with scratch-baked bread, entree-style salads and lunch and dinner specials. Menu items can be paired with a cocktail, beer or wine to enjoy in the in-store dining room or on the patio.

About a third of consumers say they would be likely to use delivery for orders of prepared foods; however, only 14% of retail foodservice occasions take place via delivery, according to the Technomic report, which sees tremendous potential for growth in delivery of prepared foods.

“Regularly scheduled grocery trips drive many of these purchases as consumers appreciate being able to take care of grocery shopping while also getting a freshly prepared snack or meal,” Technomic said. “Moving forward, look for prepared foods delivery occasions to grow in step with grocery delivery as these services present easy add-on opportunities for prepared foods.”

Standard Market’s What’s for Dinner Tonight? dinner-for-two conceptand more are available for delivery via Uber Eats, Grubhub and DoorDash. Every generous meal for two, including Cajun Gumbo and Arroz Con Pollo, is made by Standard Market chefs and retails for $17.99.

In the U.K. and Europe, Wilson sees some of the leading grocers implementing dedicated areas in-store to Uber Eats-friendly packaging. While in-store Uber Eats-designated sections may be an increasing focus, promoting dine-in and delivery options digitally is equally important.

“Digital is where the younger generation is,” says Wilson, who points out that digital coupons are “tremendously effective. In the surveys we do, digital coupons always come up on top. Digital allows you to zoom into consumers.” However, he cautions, targeting shoppers with digital coupons as they shop the store can be perceived as somewhat “big brother,” and thus off-putting.

“It’s not a black and white world,” says Wilson. “Different consumers want to engage and buy food in different ways, but social media is a great place to reach younger consumers. It’s really the future.”