Wegmans Food Markets is seeking full-time employees for a store scheduled to open in Mannheim Township, Pa., in early fall.

The 120,000-square-foot store, currently under construction near Lancaster, Pa., is Wegmans’ third announced new store slated to open in 2018. The Rochester, N.Y.-based retailer previously announced openings on deck for Natick, Mass., on April 29 and Chantilly, Va., on June 3. A precise opening date for the Lancaster unit is forthcoming. 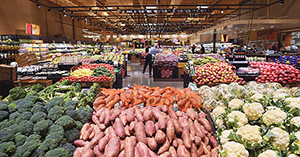 Known for its large, high-volume stores, merchandising flair, in-store restaurants and a slow but steady pace of expansion, Wegmans, which currently operates 95 units in six states, has announced 12 stores in its development pipeline in addition to the three stores set to open this year.

Wegmans last month revealed additional details for its forthcoming unit in Natick, Mass., which will span 146,500 square feet that was formerly occupied by a JC Penney department store in the Natick Mall. That store will feature the debut of the retailer’s first Mexican restaurant concept, Blue Dahlia. The full-service restaurant and tequila bar is being led by Culinary Director Roberto Santibanez, the Mexico-born restauranteur and cookbook author known for contemporary Mexican cuisine at restaurants such as Fonda and Rosa Mexicano in New York.

According to Wegmans, Blue Dahlia will offer authentic, contemporary Mexican food and a tequila bar serving craft cocktails, to be located on the second floor of the multilevel space.

“The inspiration for the menu at Blue Dalia is my hometown of Mexico City and especially the energy of the markets that are so important to Mexican culture,” Santibanez said in a statement. “Guests will see centuries-old tortilla-making on display alongside crushed-to-order salsas, contemporary craft cocktails and of course, an extensive tequila and mezcal selection. Being inside the market, we have immediate access to the best seasonal produce and ingredients. As a chef, it’s really a unique and exciting place to offer this restaurant.”

The Natick store, as well as the Chantilly location set for a June opening, will also feature outposts of The Burger Bar, which Wegmans describes as a “family-friendly” casual restaurant counter serving burgers, sandwiches, milkshakes and kids meals.