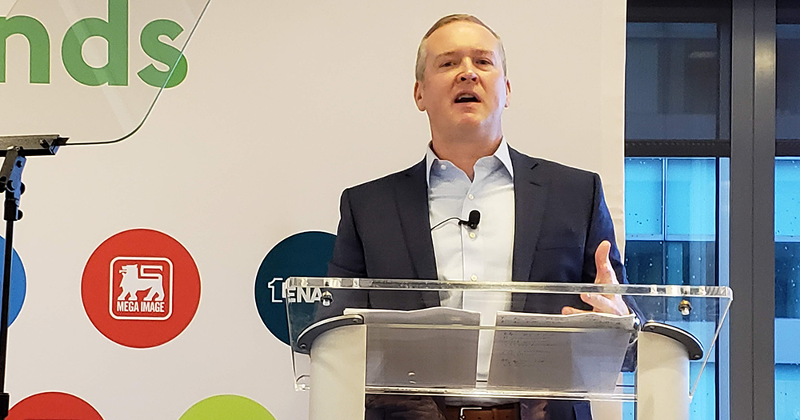 As part of what officials called an “ambitious” new approach to omnichannel, Ahold Delhaize is building a companywide digital ecosystem that will smooth over lumpy legacy practices while enabling U.S. banners to adapt and execute its capabilities locally.

Among other things, the strategy will reverse the traditional roles that Peapod and local store brands have played in their go-to-market strategies. For more than a decade, Ahold served online shoppers of its brands through offerings known as Peapod by Stop & Shop and Peapod by Giant. Those offerings will be recast next year to feature local branding, “Powered by Peapod,” in a manner not unlike Instacart backs associated brands.

“The brand will become the predominant carrier and Peapod will become the enabler,” Ahold Delhaize CEO Kevin Holt said during the retailer’s Capital Markets Day event on Nov. 13 in New York.

Although there has been no public launch yet, one possible outcome of the new approach can be seen in U.S. Trademark applications contemplating a new identity for the online shopping component of Ahold Delhaize’s Giant/Martin’s brand. That indicates a new identity to be known as Giant Direct.

According to J.J. Fleeman, Ahold Delhaize’s chief digital officer and head of its newly launched Peapod Digital Labs unit, the new ecosystem would “leverage our skill and expertise as a centralized team [and] allow each of the brands to strengthen their unique personality in the local marketplace.”

Those changes would be among many headed to Ahold Delhaize next year, Fleeman said during the Capital Markets Day presentation while affirming: “We are entering 2019 with an ambitious plan ... [which] will accelerate omnichannel capabilities to all the brands here in the U.S. market.”

Peapod Digital Labs, announced in May, oversees the Peapod brand but also includes operations, IT and e-commerce, as well as oversees partnerships such as the newly announced digital media program allowing CPG brands to target, optimize and measure digital media campaigns through Ahold Delhaize’s online offerings.

In 2019, the unit will work toward broadening the offer for U.S. brands behind an integrated platform, expanding its portfolio of fulfillment options by expanding click-and-collect to 600 of its nearly 2,000 U.S. stores; building micro-fulfillment centers, such as the one launching at a Stop & Shop store in Windsor, Conn., to provide faster and more cost efficient order assembly; and utilizing third-party delivery partners such as Shipt, Instacart and Deliv with an eye on providing same-day, next-day and on-demand delivery.

Currently, the majority of Ahold Delhaize’s $1 billion in U.S. online sales are next-day orders fulfilled through Peapod. About 65% of Ahold Delhaize shoppers will have access to same-day delivery and pickup by 2020, Fleeman said. 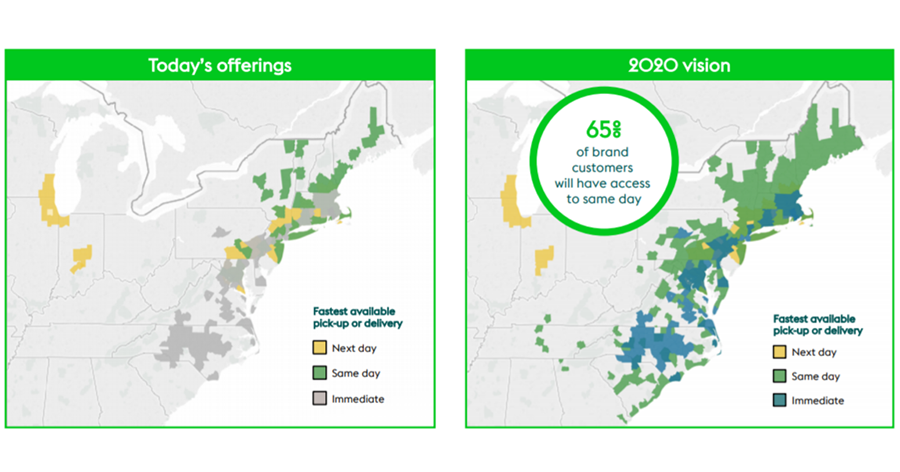 The new plan calls for a common digital platform system that would replace brand-specific platforms and harmonize assortment and pricing between stores and online for the first time. This will help create what Fleeman called “seamless” brand loyalty across platforms.

“With this platform in place, we’ll be able to give our customers a personalized and inspirational and exclusive shopping experience that [our target customer] craves. But also, in a very tactical way … the same assortment, the same price, the same promotions and integrated loyalty that you would experience in a store, making this one seamless experience.”

New innovations to be rolled out include a “My Shop” capability allowing customers to track past purchases, receive customized product recommendations, build their own shopping list, save recipes and access their loyalty programs and rewards online, Fleeman said that would address a “less than ideal” experience customers currently have managing those tasks online.

Although Ahold’s legacy brands have offered home shopping through Peapod for nearly 20 years, officials have made no secret of their disappointment in the division’s growth rate relative to competitors over recent years. The company said it would experience about 10% e-commerce sales growth this year, but is shooting for 20% growth in 2019 and 30% by 2020.

Officials view e-commerce as a means to grow market share and loyalty, with Fleeman saying that omnichannel shoppers tend to spend two three times more than those that engage with the brand through the store or online only.