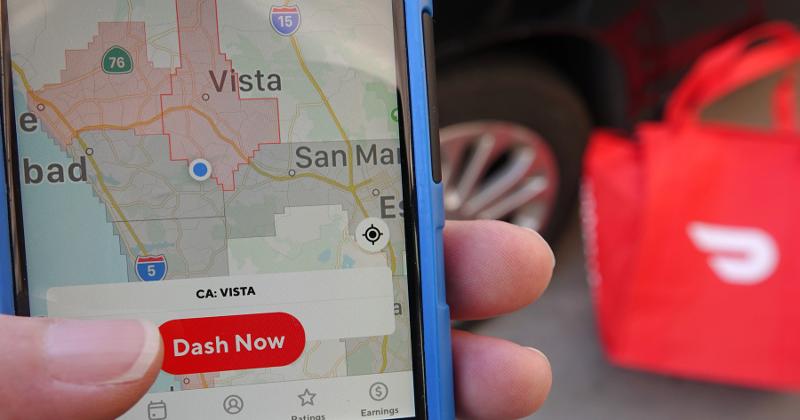 In a move designed to evolve its online grocery delivery to a new level of convenience for shoppers while capturing incremental sales opportunities, Albertsons Cos. said Sunday that it would be the first grocery participant in the newly launched “DoubleDash” offering from online delivery partner DoorDash, allowing online shoppers to combine their Albertsons purchase with a separate order from a restaurant or other participating merchant in a single delivery.

The announcement was revealed by Chris Rupp, EVP and chief customer and digital officer for Albertsons, during an interview onstage with WGB at the Groceryshop conference Sunday evening in Las Vegas.

DoorDash introduced DoubleDash last month, saying the feature was available on deliveries from a range of stores including 7-Eleven, Walgreens, Wawa and QuickChek, local restaurants and DoorDash’s own DashMart virtual convenience store. The technology alerts customers making an order to consider pairing it with a second trip that could be along the route for the first trip’s assigned delivery driver without incurring additional delivery fees or the need to execute a separate order.

This generates incremental demand for merchants, helps DoorDash efficiently orchestrate driver trips and provides new convenience for shoppers by expanding use cases for delivery, according to Albertsons. Rupp cited an example of a customer ordering a delivery meal to eat that evening—along with eggs for breakfast the following morning and an item for their children’s school lunch, both of which could be Albertsons’ sales. When asked to assess how the company weighed the risk of such an offer costing Albertsons a sale—for example, a customer who might otherwise have included a fresh deli meal in their basket can now shift that sale to an area restaurant brand—Rupp emphasized the offering's overall role in enabling convenience as a means to win trips over time.

“The more you help customers get done what they want to get done, the more they’re going to come back to you,” Rupp said. “We’re helping customers answer an important question for them, which is, ‘What’s for dinner tonight?’ And there’s no chance that every customer on the planet is going to buy all of their food from one place for the rest of time. There’s room for lots and lots of players in this category.”

The new offering comes only months into a partnership between Albertsons and the San Francisco-based delivery tech platform announced in June—and amid much activity in the emerging e-convenience field industrywide. In places like New York, a fleet of instant delivery grocers have raced onto city streets delivering small orders in 15 minutes with an eye on replacing large stock-up trips with multiple convenience shops. Kroger and Instacart earlier this month said they are now promising 30-minute delivery on a curtailed selection from its stores called Kroger Delivery Now.

DoorDash officials say the expansion leverages its heritage as a restaurant delivery partner while deepening its relationship with users. Earlier this year, DoorDash said nonrestaurant deliveries accounted for just 7% of its business but were growing at a much faster rate. CEO Tony Xu, who was expected to provide further detail about the Albertsons partnership in a separate address to Groceryshop attendees on Monday, in a conference call last month said the expansion plays into a strategy of creating a marketplace that generates incremental demand, “while offering best-in-class solutions category by category, where we bring everything inside the neighborhood to consumers in minutes, not hours or days.”

DoorDash in the meantime has continued to expand availability in the grocery channel, announcing the addition of several new regional grocery partners to the DoorDash platform and marketplace app, including Sunbury, Pa.-based supermarket firm Weis Markets and Cardenas Market, a leading Hispanic-focused chain with stores in California, Arizona and Nevada.

Rupp’s remarks—made in her first extended interview since joining the Boise, Idaho-based retailer following stints in influential roles at Microsoft and Amazon in December 2019—came as part of a wide-ranging discussion of the various aspects of that mission during an opening-night general session as Groceryshop returned to an in-person event for the first time in nearly two years. 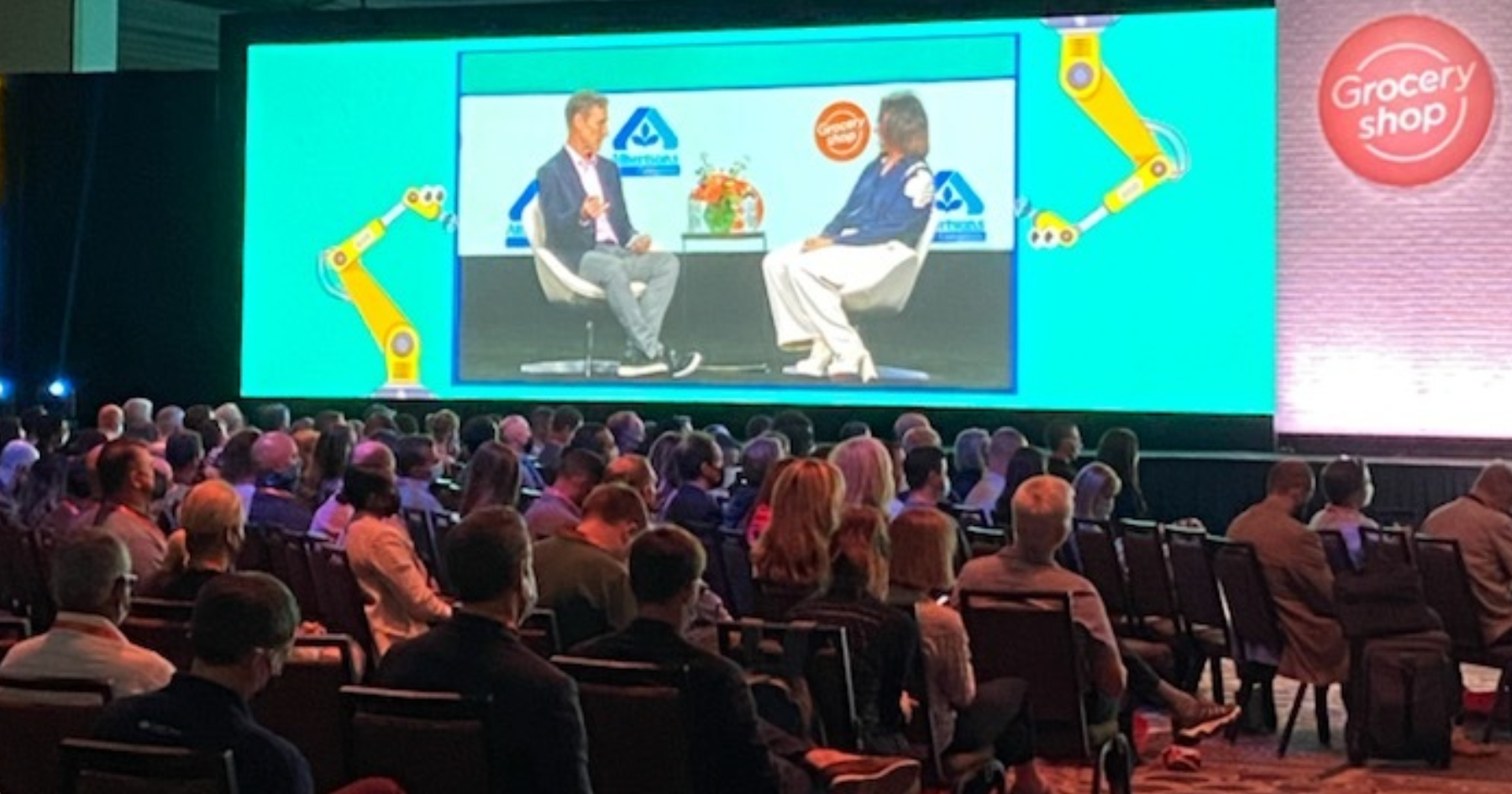 Rupp said Albertsons’ journey was “still in the very stages” despite rapid iteration that took over her first year as the grocer and its stores absorbed the impact of the COVID pandemic, which drew millions of new shoppers online and prompted Albertsons to accelerate e-commerce availability including delivery and pickup from about 500 stores at the outset of the pandemic to more than 1,700 today. She emphasized that Albertsons was doing so on a foundation of quality service and with the understanding that “we’re not a technology company; we’re a food company.”

During COVID, “We learned the importance of being able to scale access to our service. At the same time, we realized that it was important  to get each and every delivery right with our customers, so we were spending a lot of time on the quality of our processes and outcomes, making sure that we deliver at the time we said we’d deliver, with the groceries we said we were going to pick for customer,” Rupp said. “So as we started to scale out to include more locations, we knew we had very good service that we were offering.”

Reviewing learnings from various aspects of the journey, Rupp revealed for the first time that Albertsons’ Marketplace—a relatively early arrival intended to give the company a better ability to draw sales of so-called “long tail” items that can thrive in pure-play e-commerce sites like Amazon—had been officially discontinued.  “That approach just did not work for us,” she said, describing it as an “island” that struggled to draw customers and tended to leave them “stranded” from associated company sites.

Rupp had considerable praise however for other developments, crediting a recent partnership with Google that allowed the company to reach considerable new audiences by displaying availability of the COVID vaccines at its pharmacies in Google Maps searches for example.

And recent changes to its loyalty program—integrating rewards and shopping into a single app and adding a paid tier called Fresh Pass that offers unlimited deliveries and discounts on own brand items—is a competitive differentiator in the sense that they help to deliver what Albertsons shoppers want, she said.

Keeping them in the franchise, she added, was a matter of continuing to provide increased convenience  and broadening the selection available to them. That will be a top priority for Rupp as she looks ahead.