Emergency efforts to mitigate effects of the COVID-19 virus helped to supercharge momentum at Albertsons Cos., but it’s what it may leave behind when the danger passes that has its CEO excited.

“Things will change, but if you step back and look at customers, you’ll see two or three behaviors that have now gone on for a couple of months,” Vivek Sankaran said in an interview with WGB. “They’re cooking more at home. They’re spending family time together. They’re grilling at home, they’re more baking cookies at home and baking bread at home. They are buying alcohol to consume at home instead of at a restaurant. And these are behaviors they are enjoying. 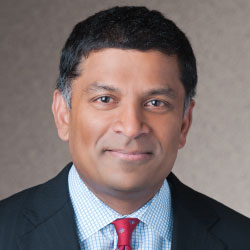 “While that might drop off, they are still working at home and they’re realizing, working from home isn’t so bad. You can get a lot done there. We did an IPO working from home. People are finding out this is possible,” he said. “We hope COVID goes out quickly and as it goes out, we surely expect people will go back to more eating out, but I suspect that instead of eating outside five times a week, it might be two or three times a week. And if you’re not going to [an office for] work as many times a week, you’ll be eating more breakfasts and lunches at home. So I don’t know the answer of when this all ends, but as I think about what is likely and what is less likely, and I think we’ll all be eating more at home.”

Sankaran’s remarks came moments after the markets closed June 26, marking the first day of public trading of Albertsons’ stock in nearly 15 years. He acknowledged the past few months have been hectic but also lucrative. The remarkable conditions for essential businesses may have helped to draw new attention to Albertsons, though Sankaran insists the company was courting investors with longer horizons. As it went, a market downturn last week contributed to a lower initial trading price than the company had sought and the stock dipped slightly on its first trading day.

“The markets do what they do,” Sankaran said. “Investors get in with you because they believe in your long-term story.”

Albertsons, which had twice tried and failed to get publicly listed over the past five years, reached the trading floor just 14 months following Sankaran’s arrival at the Boise, Idaho-based company. The former Frito-Lay executive said being public itself means no changes in the priorities or the strategy he has prescribed at Albertsons, noting they helped to bring new momentum to Albertsons months before the pandemic.

Sankaran has described a vision for Albertsons as a “locally great and nationally strong” company, leveraging its $60 billion in sales to support well-merchandised and well-run local stores, underpinned by technology to support their productivity. Since arriving last April, he has made a series of high-profile hires, pursued additional technology innovation and has embarked on a $1 billion, three-year productivity goal.

“My charter when I came in was to put together the next chapter for Albertsons. I’m a deep believer in technology—that technology should enable everything we do—and so we further developed what was already a good emerging technology agenda," said Sankaran, who holds bachelor and master’s degrees in mechanical engineering and industrial engineering, respectively. “And we needed to work on cultural transformation in the company, bringing some talent from outside to fill where we had gaps, and doubling down on improving diversity. And so [my strategy] was about bringing those ingredients together, and we did it really quickly.”

While sales, comps and profits have all accelerated since Sankaran came on board, Albertsons’ performance during the coronavirus crisis has outpaced its conventional rivals. Sankaran attributes this to decentralized operators who moved quickly to adjust to the bounty of sales.

“The heritage of this company is very entrepreneurial,” he said. “It’s a company that has strong operators who move fast and make decisions quickly. We want our people in our divisions to make decisions. And we want to support them with capabilities that can help capacity.

“Speed was essential in this time frame,” he continued, noting what he called “creative” methods of bolstering supply and finding employees who helped Albertsons absorb the new demand.

“I tell everyone there’s no good side to this crisis,” he added. “There’s a busy side, and there’s the opposite, and we were lucky to be on the busy side, being an essential service.”

Some observers believe an accompanying economic recession could eventually pressure companies such as Albertsons, but Sankaran is remarkably unruffled. He said he has seen little evidence so far of a rush to value among shoppers in its stores, pointing out both the sustainability of the food-at-home trend and the unique characteristics of a slow-reopening economy.

“This is not our first recession. Some of our banners have been around for more than 100 years, and so we know how to deal with that,” he said. “But there is one other phenomenon in this recession, and that is, there are no sports events. People are not going to the movie theater. And so all of that consumption, all of that spend, is still going to be in people’s pockets. And so we’ll have to see how this plays out. While there might be a recession and unemployment, you will still find people saying, ‘You know the one thing I know I can still enjoy is a great meal at home.’”