Albertsons Cos. has “positively changed people’s minds and their hearts” through important conservations around diversity, equity and inclusion, the company's SVP and Chief Diversity and Inclusion Officer Jonathan Mayes said during a presentation at Western Michigan University’s 55th annual Food Marketing Conference. 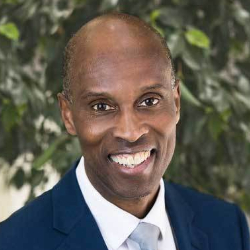 Mayes shared what the Boise, Idaho-based retailer is doing to “move the ball down the field” with regard to DEI efforts during a panel discussion March 24 titled “Why Diversity, Equity and Inclusion Matters.”

One of those efforts—one that Mayes said he sees the most traction from—is 2-hour long conversations Albertsons calls “Leading With Inclusion.” The conversations involve 25 to 35 people at a time and are facilitated by an individual who walks folks through curriculum that aims to do five things:

“I’m struck by the dozens and dozens of unsolicited stories I’ve gotten about how these conversations have positively changed people’s minds and their hearts,” Mayes said.

In the past year, Albertsons has also held town halls with its associates and CEO that Mayes said “launched a new aspiration of who we want to be as a company with regard to diversity, equity and inclusion.”

That aspiration focuses on hiring and developing employees; providing resources to help employees be the best versions of themselves; and measuring where the company is with regard to diversity, equity and inclusion and setting targets for where it aims to be.

With regards to hiring, Albertsons has made a conscious effort toward diversity. “What we have done as a company is we’ve looked at the slate of candidates, and we have said we want diversity—women, people of color, more than just one—on the slate,” Mayes said, adding that Albertsons also has a requirement that there are “diverse slates” for those making the hiring decisions.

“We’ve also set targets for where we want to be with regard to women in management, looking at where we are across the company and where the opportunities are to narrow where we are as a company,” Mayes said.