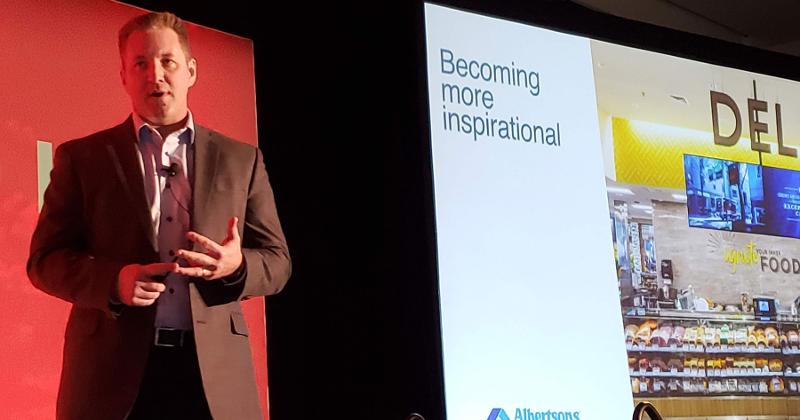 As it seeks new ways to inspire shoppers in physical environments, Albertsons Cos. is tapping into virtual worlds.

A recent holiday sales promotion connected Albertsons shoppers to visual inspiration through Pinterest, driving sales and engagement at the shelf edge, Brain Messerschmitt, Albertsons’ VP of shopper and national marketing, said during a presentation at the National Retail Federation show in New York.

Messerschmitt, who joined Albertsons five months ago after 20 years at Procter & Gamble, said the partnership—which also included shelf-tag provider Vestcom and five CPG companies—was successful enough to launch a second version later this year and that it pioneers what he described as new kind of shopper marketing that “amplifies and inspires” shoppers in stores.

“Historically, in-store marketing really focused more on the functional side of marketing: navigational tools helping people find the products they are looking for, and getting them in and and out. That’s important, don’t get me wrong,” he said, “but things are changing.”

To execute the program, Little Rock, Ark.-based Vestcom created custom shelf tags providing a scannable link that sends shoppers using their mobile phones to a Pinterest page with custom content. In this case, it was holiday recipes that featured products from participating CPG companies, recipes and special offers at Albertsons-owned stores.

Pinterest, the social network built around visual inspiration, is a natural partner for food marketers, said Arthur Sevilla, head of CPG global strategy and marketing for Pinterest, who also spoke during the presentation. Sevilla noted, for example, that food and beverage was the platform’s largest category and that its participants primarily use the service as inspiration to shop.

According to Messerschmitt, shopper marketing is evolving to reflect the omnichannel world and its influence on shoppers—an area he said Albertsons was determined to lead in the industry.

“Not only is [the shopper] concerned about the products for her family, she’s also looking through the lens of entertaining her family and friends, and that desire to be learning about new solutions is always there,” he said. “They want us to talk not about just products but about solution: how do I create meal solutions for my family, and about new solutions that are fun and exciting.”

In an interview with WGB, Messerschmitt declined to specify the sales lift the collaboration created but said it was successful enough to inspire a second such program launching later this year and supported the retailer’s recent sales momentum. The move also reflects influence of the retailer’s new CPG-bred leadership, including Messerschmitt and its new CEO, PepsiCo veteran Vivek Sankaran.

“Coming from the CPG side of the business, there were always cool things I wanted to do. And being on this side of the business now, we’re working with [shopper marketing firms] News America and potentially Valassis, and all the suppliers on some really cool stuff,” Messerschmitt said. “I’ve only been on the ground for five months, but you can expect lot of cool stuff from us.”