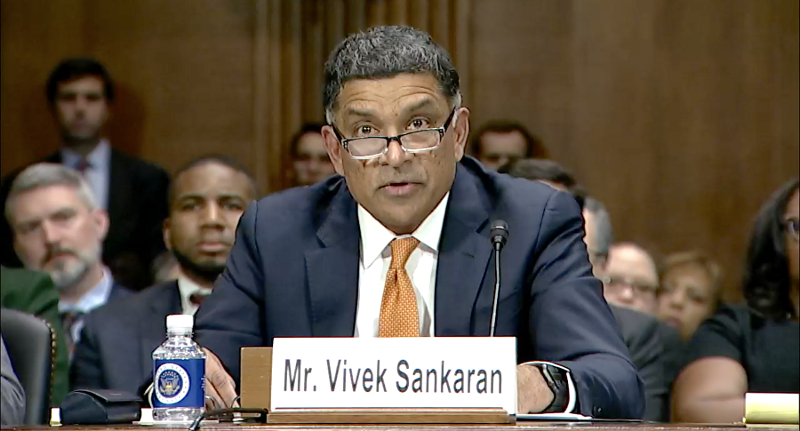 Albertsons' Sankaran also stressed at the hearing that his company is strong financially and wouldn't be hampered by the dividend payment. / Photo: U.S. Senate

A much-debated $4 billion special dividend related to the Kroger-Albertsons merger deal received an airing-out this week in the U.S. Senate.

Albertsons disclosed the special dividend of $6.85 per common share when the Boise-based grocer and The Kroger Co. unveiled their merger pact on Oct. 14. Plans originally called for the dividend to be paid to shareholders on Nov. 7, but lawsuits by state attorneys general led to a temporary restraining order that has suspended the payment pending the outcome of a Dec. 9 hearing in Washington state court.

Efforts by state AGs, labor unions and consumer groups to block the $4 billion dividend contend that its size will hamper Albertsons’ operations and ability to compete during the merger transaction’s antitrust review, in turn impacting workers and shoppers. Opponents of the dividend claim the payment should be held back pending a full review of the merger deal by state and federal regulators. Kroger and Albertsons said they expect to close the transaction in early 2024, but industry observers noted that regulatory approval could take up to two years.

At the Senate subcommittee hearing yesterday, Sen. Mike Lee (R., Utah) asked Sankaran about the dividend payment, saying Albertsons “just proposed handing out $4 billion to its shareholders, which dwarfs the $2.8 billion in commitments tied to the merger.” Under the deal, Kroger—which is acquiring Albertsons—plans $500 million in price investments, $1.3 billion in store upgrades and $1 billion in worker wage and benefits investments post-merger.

“Regarding dividend, I know there’s been a lot of interest on it. I want to re-emphasize a couple of things,” Sankaran said. “First is that Albertsons Cos. is in excellent financial condition, and that was the case before the dividend payment and will remain the case after the dividend payment.

“We are in an excellent financial condition because over the last several years, as I mentioned in my opening statement, Albertsons Cos. has bought a number of distressed stores, 400 stores from Supervalu,” he explained. “Subsequently, Safeway invested $11.5 billion over that time frame into turning around those stores and an additional $1.5 billion into the communities that we operate in. And in every year since the [2015] merger with Safeway, increasing wages and at the same time becoming more competitive, we had not returned cash to shareholders. This $4 billion is a return of cash to those shareholders who have supported us over this decade. And it has nothing to do with the merger itself.” 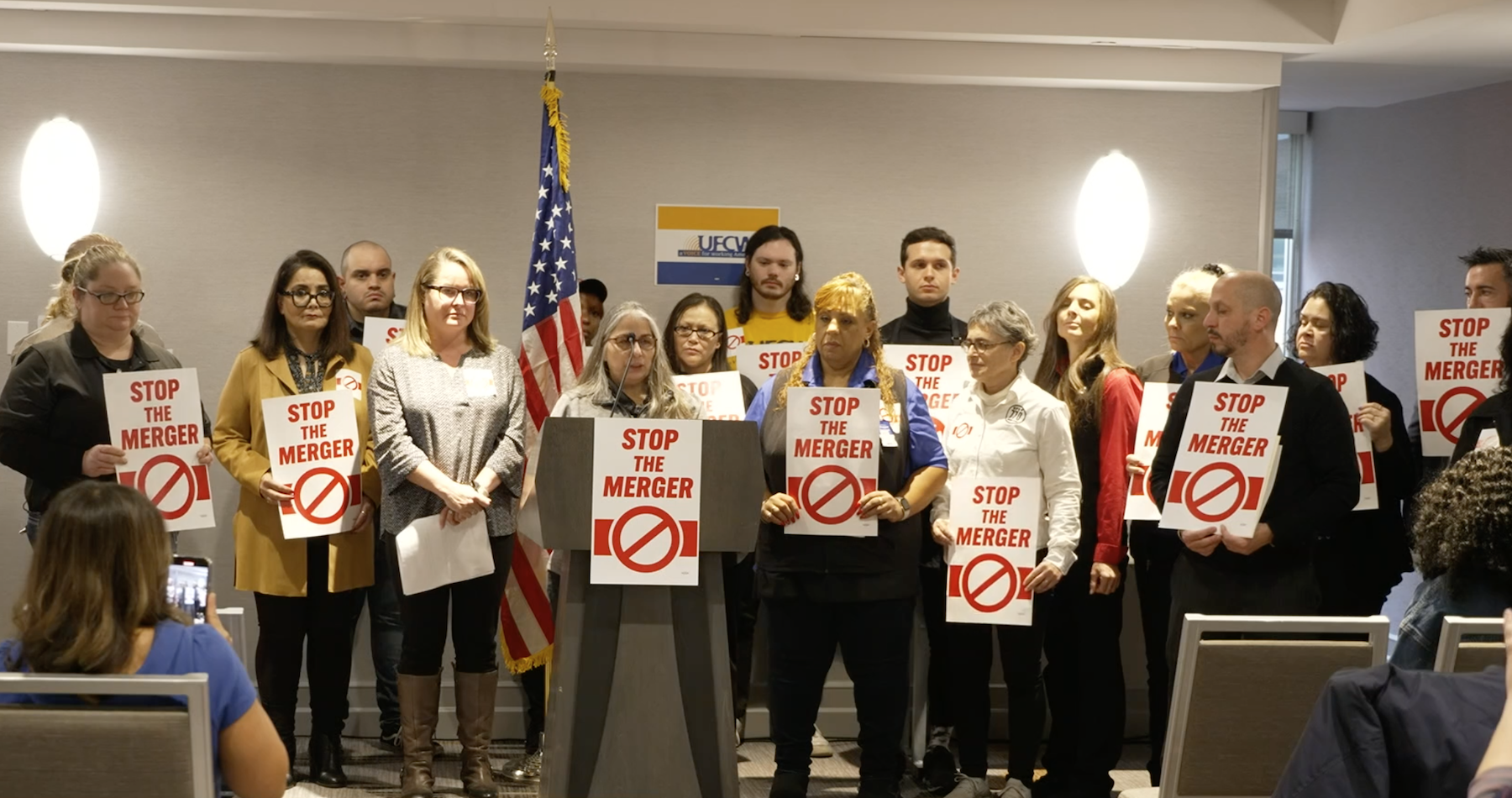 At a UFCW press conference in D.C. on Tuesday, UFCW Local 400 member and Safeway worker Jane St. Louis (at podium) said Albertsons shareholders are "trying to give themselves a $4 billion payday" before the merger deal's FTC review. / Photo courtesy: UFCW

For Albertsons, the merger deal stems from a “review of potential strategic alternatives” that the company’s board of directors initiated more than eight months ago. The effort reflected Albertsons’ concern, in large part, that its business was being undervalued versus those of its competitors.

Albertsons, previously owned by an investment group led by Cerberus Capital Management, went public in June 2020 following an initial public offering. Cerberus still holds an approximately 28% stake in Albertsons. The private-equity firm initially acquired an interest in the grocery retailer in 2006 when Albertsons Inc. was sold to a consortium of companies. The Cerberus-led investment group acquired roughly 680 stores to form Albertsons LLC, while Supervalu bought more than 1,100 stores and CVS purchased about 700 stores.

Earlier on Tuesday, six local unions of United Food and Commercial Workers (UFCW) held a press conference in Washington, D.C., to voice their concerns about the Kroger-Albertsons merger. One of UFCW workers’ key concerns was the potential impact of the planned $4 billion dividend payment.

“Over the last three years, we have lived through the COVID experience, and me and co-workers have served our community and served our employers and provided essential services in a time of crisis. We have all helped make our stores run,” UFCW Local 3000 member Naomi Oligario, a front-end checker at Safeway for 37 years, said at the press conference. “We are all concerned with this proposed merger and the $4 billion giveaway to rich shareholders instead of investing in us—the workers who helped make the profits. We need safer stores, our customers need lower prices and we need more competition—not less.”

UFCW Local 400 member Jane St. Louis, a front-end associate at Safeway, added, “These private-equity guys are not from the grocery industry. They have never worked in one of our stores. They do not know or care about our business. All they care about is making money for themselves. And now, they are trying to give themselves a $4 billion payday before this merger is even reviewed by the FTC. What does my future hold working for a company without any money? How will Safeway keep its promise to fund our pension? You can see why workers like me are worried.”