Continue to Site >>>
Edit
NACDS Board Chairman Mark Panzer, SVP of pharmacy, health and wellness at Albertsons Cos., during his address at the 2018 NACDS Total Store Expo business program; Photograph courtesy of NACDS

The pharmacy and drugstore industry’s largest gathering of influential leaders converged in Denver from Aug. 25-27 for the National Association of Chain Drug Stores (NACDS) Total Store Expo. The overarching theme of the annual conference’s business program emphasized the association’s commitment to the success of retailer trading partners amid times of dramatic change. That was alongside a critical message to lawmakers and opinion leaders about how the emerging trade war jeopardizes the industry’s efforts to transform in ways that benefit employees and consumers.

“In short, it’s about business community and intelligence, it’s about effective government advocacy, and it’s about powerful and practical information on policy,” said NACDS Chairman Mark Panzer, SVP of pharmacy, health and wellness for Albertsons Cos.

When discussing business community and intelligence, Panzer detailed his personal experience of benefiting from relationships within his company and from collaboration with business partners. Accordingly, he urged attendees to seize on conversations and “the vision that the NACDS Total Store Expo can foster for the entire store: pharmacy and the front-end; health and wellness; technology; distribution and logistics.”

Panzer also discussed his experience of NACDS’ value in government advocacy: “I learned something in the early days of my career that reinforces the importance of advocacy,” which he said, “is just how important pharmacy is to people or patients, and to the communities they serve. Pharmacy is worth fighting for.”

While updating attendees on NACDS’ progress on the “Access Agenda," which involves playing aggressive offense and tough defense on pressing issues while working on behalf of the industry to partner for stronger and safer communities, Panzer described the successful progress throughout 2018 in expanding pharmacists’ immunization authority, fostering medication synchronization and enhancing the ability of pharmacists to furnish medications. He also reported on the status of NACDS’ work with the National Grocers Association and other industry partners to advance direct and indirect remuneration (DIR) fee reform.

Panzer also discussed progress on NACDS’ policy recommendations for opioid-abuse prevention, including requiring electronic prescriptions to help stop fraud and abuse. “It was not that long ago that NACDS was on the leading edge of urging and collaborating with the Drug Enforcement Administration to allow e-prescribing of controlled substances,” Panzer said. “Now, we’re working to mandate it. We have moved from a question of ‘may’ to a question of ‘mandatory.'"

While echoing Panzer’s focus on DIR fee reform and on expanding pharmacy’s ability to serve patients with newer services, NACDS President and CEO Steven Anderson urged industry leaders to call on decision-makers and opinion-leaders in Washington, D.C., to avert the emerging trade war, which he said “has already involved tariffs on billions of dollars of goods, and has targeted hundreds of billions of dollars more.”

“The emerging trade war is on the minds of those doing business here at the NACDS Total Store Expo, and on the minds of consumers,” Anderson said. “Diverse products, packaging and equipment already are being affected. There are increased freight costs too. This matters to the entire supply chain. It affects the products on store shelves; it affects the process of getting those products to the shelves; and it even affects the shelves themselves, given rising steel costs.”

During his address, Anderson invited conference attendees to observe a moment of silence in honor of the late Sen. John McCain. 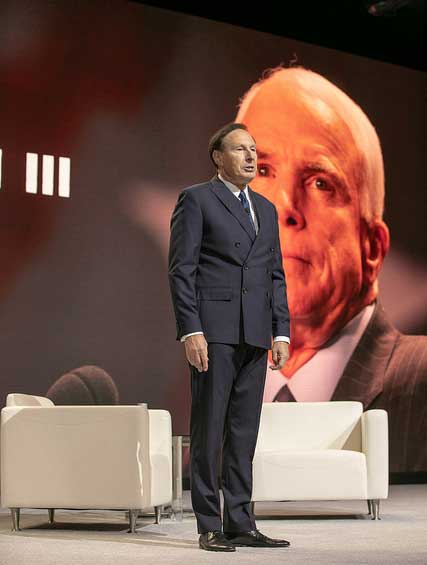 During his address, Anderson highlighted results of an NACDS-commissioned survey of Denver residents, conducted by Morning Consult, which found: