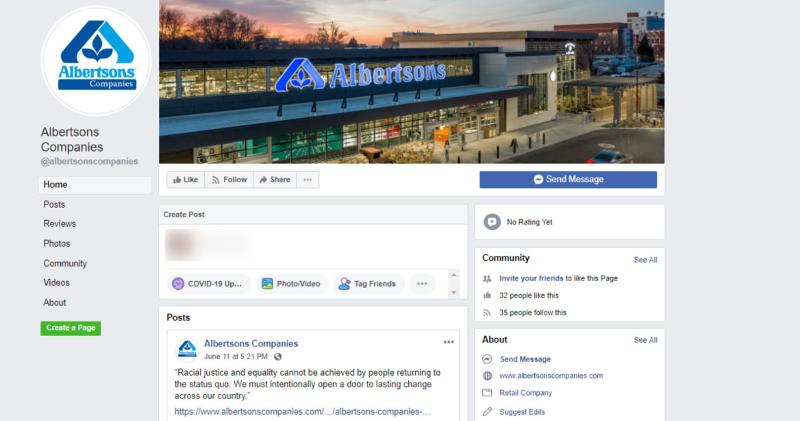 Albertsons Cos., Target Corp., Southeastern Grocers, The Hershey Co. and Coca-Cola are among big U.S. businesses that say they would “pause” social-media advertising buys, at least temporarily, in an attempt to call attention to a plague of hate speech and misinformation online.

According to reports, the ad reductions could cost social platforms such as Facebook billions in revenue. The Menlo Park, Calif.-based social-media giant has come under intense scrutiny in recent months for its approach to policing speech—particularly amid recent U.S. social unrest. At least some of the companies participating in the boycott are aligned with a campaign known as Stop Hate for Profit, which is specifically targeting Facebook.

Stop Hate for Profit, whose partners include the National Association for the Advancement of Colored People (NAACP) and Color of Change, is urging companies to “hit pause on hate.”

“We are asking all businesses to stand in solidarity with our most deeply held American values of freedom, equality and justice and not advertise on Facebook’s services in July,” says the organization’s website.

Albertsons, Boise, Idaho, in a statement this week did not mention a specific platform, but said it would pause all social-media advertising during July to “work with the platforms to identify, develop and implement necessary changes. We are confident we can help spark lasting change that finally extends the promise of our country’s highest ideals to all, no matter what.”

The movement continues a trend among U.S. companies to be more outspoken on justice issues than they might once have been.

“As a company, we have committed to holding courageous conversations that reflect our genuine desire to boldly face inequity and injustice head on. While these are difficult discussions, they have proved constructive by extending a spirit of courtesy, dignity and respect to all who participate,” Albertsons’ statement said. “These conversations are happening in our society at large as well—often online. Frankly, we think these environments could benefit from more courtesy, dignity and respect. It is incumbent on social-media platforms to take more responsibility for the climate they foster. That includes taking bold steps to combat hate speech and misinformation, and having better support for targeted users.”

Late June 30, Southeastern Grocers of Jacksonville, Fla., said it was also joining the movement. “Starting July 1, we will put an indefinite hold on further advertising on Facebook and Instagram social-media platforms in hopes that they continue to champion progressive change and better enforce their stated policies,” said Southeastern Grocers Joe Caldwell. “We are standing in solidarity with businesses participating in the Stop Hate for Profit campaign that share our commitment to freedom, equality and justice.”

Coca-Cola Chairman and CEO James Quincey earlier this week similarly said the Atlanta soft-drink giant would pause social ads for 30 days. “We will take this time to reassess our advertising policies to determine whether revisions are needed. We also expect greater accountability and transparency from our social-media partners,” he said.

Conagra, the Chicago-based company behind brands such as Birds Eye, Duncan Hines and Hunt’s, has also said it will stop U.S. advertising with Facebook and Instagram through 2020, as has Unilever, makers of Dove, Lipton, Hellmann’s and more.

“We have decided that starting now through at least the end of the year, we will not run brand advertising in social media newsfeed platforms Facebook, Instagram and Twitter in the U.S.,” said Unilever in a statement last week. “Continuing to advertise on these platforms at this time would not add value to people and society. We will be monitoring ongoing and will revisit our current position if necessary.”

With its advertising support in free fall, Facebook CEO Mark Zuckerberg said during a live-streamed internal town hall meeting Friday that the company would begin labeling certain posts from politicians that violate its policies, but are newsworthy, reports Forbes.  “We’re still going to allow people to share this content in order to condemn it, just like we do with other problematic content because this is an important part of how we discuss what is acceptable in our society,” Zuckerberg said.