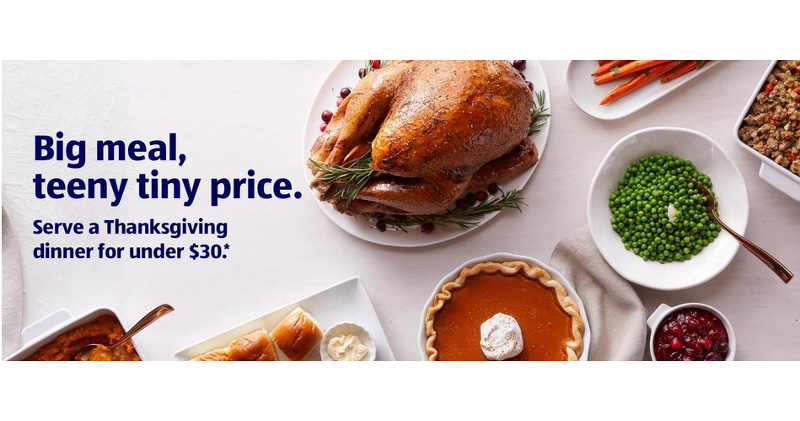 Aldi U.S. said today it was issuing each of its U.S. employees two gift cards of $30 each, encouraging them to “pay it forward” and use one for a friend or family member in need.

The $30 price point aligns with what the Batavia, Ill.-based hard discounter said is the estimated price in-stores to assemble a Thanksgiving meal for 10—a price it said is lower than the same basket last year. Aldi’s suggested meal includes a 12-pound butterball turkey, packages of Aldi’s private label pie crusts, bagged stuffing, Hawaiian-style sweet rolls, frozen peas, heavy whipping cream and a gallon of milk, along with unspecified quantities of fresh sweet potatoes, cranberries, carrots and celery, and is based on items and quantities included in the American Farm Bureau Federation’s annual Thanksgiving Dinner Cost Survey.

Miscellaneous items including coffee, better, flour, sugar and eggs are not included in the total.

The message reaffirms Aldi’s moves to emphasize pricing and value while shopping habits brought on the coronavirus—primarily, trip consolidation—tends to work against stores with limited assortments such as Aldi. A gloomy economic picture brought about impacts to U.S. businesses could however make price-focused shopping a greater priority, sources say.

“Customers expect unbeatable prices at Aldi and the holidays are no exception. While nearly every aspect of our lives is rapidly changing, we promise to continue to do everything in our power to keep prices down,” said Jason Hart, president and CEO of Aldi U.S. “We’re proud to provide shoppers everything they need for a traditional Thanksgiving meal from Aldi for less than $30.”

Aldi said its issuance of gift cards to workers taps into “a long-standing, informal tradition of acts of kindness among the Aldi community. Shoppers are often praised for thoughtful gestures, such as chipping in to help a fellow customer pay for groceries or lending a hand to load groceries into the trunk of someone’s car.”

Aldi employs around 40,000 in the U.S., according to a company spokesperon, indicating the offering to workers totals about $2.4 million.

An earlier version of this story was based on a a figure of 25,000 U.S. employees published at Aldi website. A spokesperson since confirmed the company employs around 40,000 between its stores, warehouses and corporate offices.