Deep into a $5 billion expansion designed to make it the third-largest U.S. grocer in terms of stores by 2022, Aldi U.S. said it recently opened its 2,000th U.S. store and announced plans to make a long-awaited entry into its 37th state, Arizona, later this year.

“Each new store is an opportunity to serve another community, which is an honor and responsibility we do not take lightly,” Jason Hart, CEO of the Batavia, Ill.-based hard discounter, said in a statement. “As we continue to expand, we promise to do everything in our power to offer the lowest prices, every day, without exception. In fact, as food costs are rising across the country, we’re lowering prices on hundreds of items to meet our customers’ increased need for savings.”

Anticipation of Aldi’s debut in Arizona had run rampant in recent years. The company announced in 2017 it would enter the Grand Canyon state and had reportedly secured more than dozen store sites and was eyeing a 600,000-square-foot warehouse in Goodyear, Ariz. While there was expectation the discounter could have opened their first units there as long as two years ago, Aldi is typically tight-lipped on specific plans, even after reports surfaced late last year that it had allowed building permits to expire at several sites it had made deals for in the state.

Part of that delay was thought to be around changing plans for a distribution center, which Aldi typically establishes to enable new market expansion and regional divisions. Hart this week told WGB in an email that the company was not ready to announce an Arizona warehouse. The company acknowledged this week, however, that four stores in the greater Phoenix area would open later this year. It did not identify specific sites. According to Beitz and Daigh Geographics’ Planned Grocery app, Aldi has 17 stores either planned, proposed or under construction in greater Phoenix. 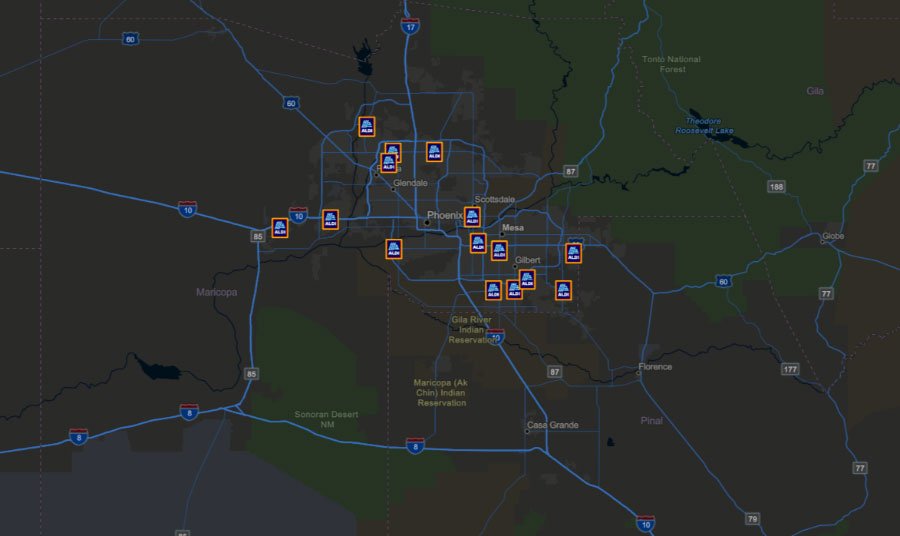 Aldi is anticipating opening as many as 100 new stores this year, as part of a $5 billion, 900-store U.S. expansion plan first announced in 2017. That would take Aldi to more than 2,200 locations, trailing only Walmart and Kroger among U.S. grocers in the number of overall sites, and surpassing conventional rivals such as Ahold Delhaize, which operates about 2,000 U.S. locations, and Albertsons Cos., which has around 2,250 sites in 34 states currently.

Also this week, Aldi said it would support new store growth in the Gulf States with a new distribution center to be located in Loxley, Ala. That facility will support the brand as it seeks new sites in Alabama, the Florida Panhandle and in Louisiana—another state where Aldi has yet to penetrate.

“We are proud that Aldi has selected Loxley for this monumental investment, bringing a regional headquarters is great for Loxley, Baldwin County and Alabama,” Loxley Mayor Richard Teal said in a statement.